I recently found a video on YouTube of Michael Wohl giving a presentation at Los Angeles Creative Pro User Group about the 360° video production process. This talk emphasizes key changes that traditional filmmakers have to make in their approach to succeed with this new medium. As an amateur in both 360° and traditional film, I still found many of of his considerations helpful, as they opened up to me a whole world of thinking about this medium, helping me approach it more intelligently and methodically.

Michael Wohl is an award-winning filmmaker with over 15 years of experience writing, directing, and editing independent films. He helped develop Apple’s Emmy award-winning Final Cut Pro, and taught at UCLA’s School of Film and Television. Most recently he turned his expertise and enthusiasm to 360° video, writing a book, The 360° Video Handbook, and giving presentations like the one I found, to teach how to use this medium effectively. His easy manner conveys both the experience and the creativity he brings to this work, and he uses video clips during the presentation to explain his points visually.

According to Michael, the full potential of this medium is still being explored. He admits that he’s not sure 360° video will really be the future of film, and I appreciate his honesty. But articulating a feeling many of us have experienced, he says that when the content is created well, the experience is like nothing else— “you don’t feel like you are in a movie, as much as you feel like you are in a new place.”

1. Create a World, not a Movie 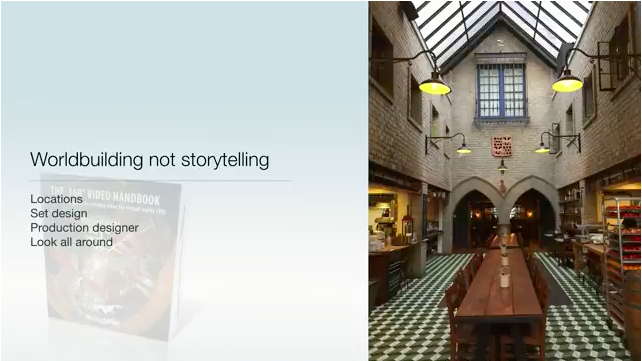 Michael does his part as an accomplished filmmaker to try to teach filmmakers to create this experience. What he came to realize after experimenting with 360° video was that everything ends up being different from traditional video. As I’m not a filmmaker, some of the differences he discussed went over my head, but some gave me clues to how to approach 360° film. Michael covers a lot of these differences, going from beginning to end of the filmmaking process. To sum up the key change that filmmakers have to make in their approach, he says, "Rather than thinking of it creating a movie, you think of it more as creating a world.”

2. It is Not Your Job to Tell Your Audience Where to Focus

He goes on to talk about a few of the key things that video producers would have to pay more attention to when producing 360° video. Some of these issues have come up in my own experience, but I would have had to think about them much longer to come to some of the pointers that he provides. In traditional film, much of the filmmaker’s work is telling the audience where to focus their attention. But that’s not even the point of 360° film—the audience will look wherever it likes—they’re supposed to for an immersive VR experience. 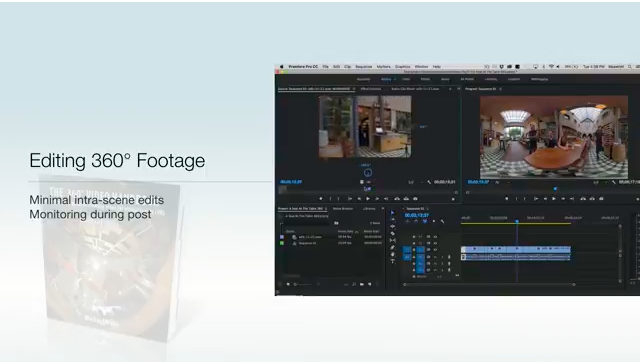 Furthermore, since the camera shoots in 360°, filmmakers would have to pay attention to what goes on in all parts of a scene, not just directly in front of the camera. This complicates some basic assumptions from traditional film. For example, the crew can’t just hang around in the vicinity of the camera—they’d be in the film. “So where are they going to go?” he jokes. For a full video production crew, things like production design also become much more important—designers would have to really design the whole space. Thinking effectively to make these films definitely comes through practice, but Michael’s pointers guide me in the right direction.

This is also true in the editing stage, where he points that that it’s important to pay attention to both the view in the headset and in equirectangular format, as you could miss problems if you neglect either. This is an easy mistake to make. Michael’s professional advice helps people avoid common pitfalls like these. 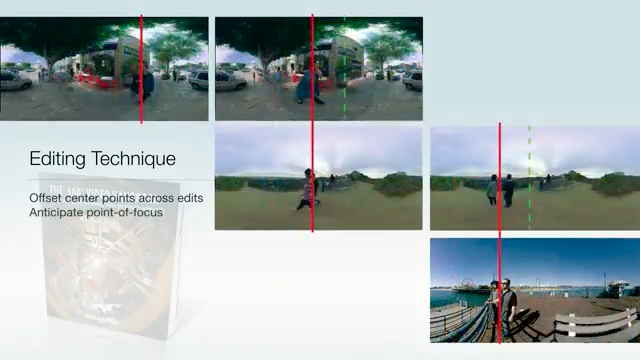 The post-production process changes too. 360° filmmakers have to think about their audience as physical people (something that I forgot to do). Say the focus keeps on moving. If the audience is watching the video in a headset, turning all the way around just to see the moving focus would be unnecessarily uncomfortable for them. To account for this, Michael recommends adjusting the center point of the first short so that the focus is consistently in front of the audience.

In this Los Angeles Creative Pro User Group presentation, Michael provides an overview of how filmmakers should approach the medium of 360° storytelling, going from beginning to end of the filmmaking process. He is thorough and to-the-point, giving the audience practicable introduction to this uncharted new medium. I think really mastering 360° filmmaking would take practice, but I appreciate Michael’s advice on what to train my attention on. Watching this video has helped better structure my thinking for future attempts at 360° video. I would recommend this video to anyone curious about the medium of 360° video, no matter their level of filmmaking experience.