Getting apk from the official store

the official plugin store lists some plugins I’d like to use. Unfortunately it seems to require a desktop application for Windows or Mac which I do not use. I’m working solely with Linux. I also noticed that the source code of said plugin is available officially on Github but releases are only for the source code.

Consequently I opened an issue but I’m wondering if there is a more general solution.

Have you tried Wine?

If your camera is in developer mode (free), use can use adb from Linux on the apk for those applications with source code. The models V, X, and Z1 run Android internally.

Is your camera in developer mode?

@craig maybe my question wasn’t clear. When I browse to e.g Wireless Live Streaming | RICOH THETA Plug-in Store I get theta360://plugins/com.theta360.cloudstreaming/apk but what I would hope for is a https link with a .apk file.

I don’t know how to get the apk directly from the plug-in store.

Are you a photographer trying to install the plugins into your camera from Linux?

Or, are you a developer trying to build an application to install the plugin into the camera from Linux?

Developer who doesn’t use Windows at all. I installed plugins before but had to rely on finding a Windows machine which I don’t find practical, especially knowing that adb works with developer mode enabled (just confirmed it using adb shell and scrcpy on Linux).

adb install will work from Linux. 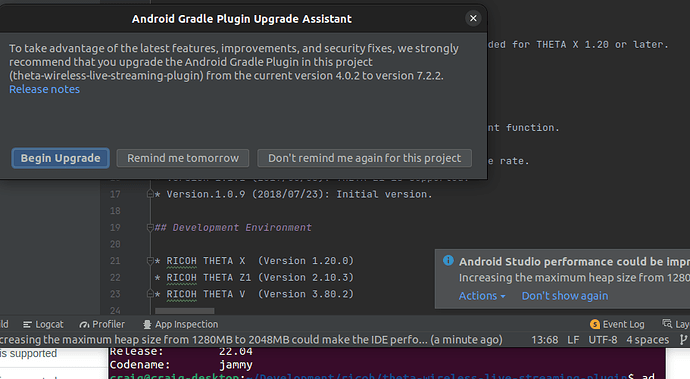 Seems to work from Linux install. 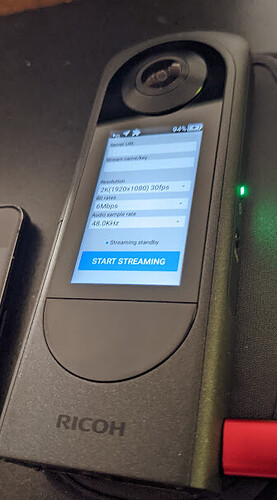 I’ll test the stream when I get back into the office.

Thanks for providing the example but as I mentioned in the topic the question is specifically about how to avoid doing the build myself. I’ve done that before (all via CLI and containers to be reproducible, e.g https://twitter.com/utopiah/status/1532385731234123777 , not Studio with GUI required) but as said and asked in the issue Releases don't include builds · Issue #5 · ricohapi/theta-wireless-live-streaming-plugin · GitHub the hope is to directly get the distributed .apk, insuring it’s the same build and avoiding extra work.

I believe you are raising two different requests.

The simpler one, per the GitHub issue, is that you want the apk to be included in the release to make it more convenient to test for people with the RICOH THETA in developer mode. I’m assuming that this is because sometimes there are a lot of stuff that needs to be installed to build the plugin. This is easy to understand. We can pass the request on in a report to RICOH. 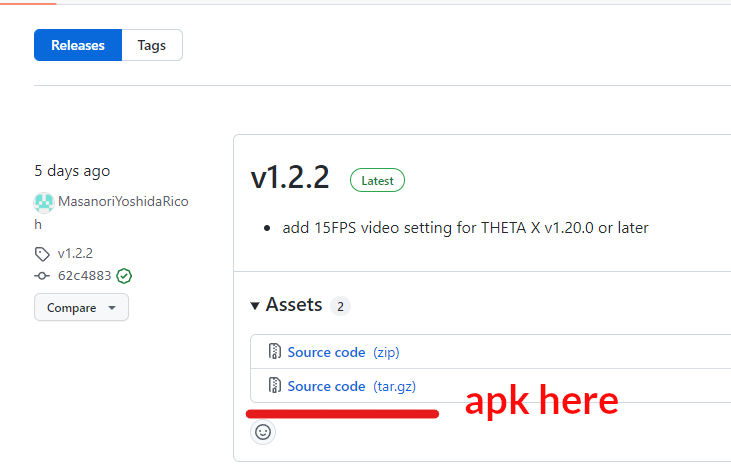 I believe that your second request is to have a way to install the plug-ins on the store from Linux for testing or use.

If this is the case, there is a difference between:

Can you clarify your request for the above points?

There is no solution, but I want to pass on your request in a report to RICOH to represent the voice of the community accurately.

I think I found the solution : append apk to the URL.

Still, to clarify my perspective and hopefully address your points :

True I made some assumptions. I believed maybe incorrectly that Theta desktop application to install a plugin was “just” downloading it from the store via the provided URL then as a visual interface, possibly relying under the hood on adb, would only send the apk to the device. It might do more than that by e.g modifying a configuration file in order to add the installed application as a plugin. It might also do something similar for switching on developer mode.

Overall my underlying request is of course that everything available on other operating systems also work on Linux. This is important in general but I believe for Ricoh itself trying to value its developer ecosystem a way to bring a community of users often versed in development and thus with the capability of make that ecosystem grow.

Yes, providing the apk on all officials plugins would be a start but unfortunately that would mean only plugins made by Ricoh rather than others ones.

Overall I believe a mechanism that is both transparent to users and requiring little investment from Ricoh might be a good compromise to begin with. For this I would tend to think documented adb commands (assuming its sufficient) would be great.

I think I found the solution : append apk to the URL.

Awesome! That is a nice find. Thank you for sharing it.

Also, thanks for the feedback.

I’ll expand the document to include other forms of development and add your tip about the apk with attribution to you.

For viewing images on the Linux desktop, I use this:

Welcome to the FSPViewer web pages

Installation information on Ubuntu 20.04 is here:

Image Viewer FSPViewer is a free tool to view 360 images from the camera. It is comparable to the RICOH THETA desktop application viewer. Installation Download You may see the following error. FSPViewer-2.1.0-64$ ./FSPViewer64 ./FSPViewer64: error while loading shared libraries: libpng12.so.0: cannot open shared object file: No such file or directory You can get the required libpng12.so.0 library from linuxuprising. sudo add-apt-repository ppa:linuxuprising/libpng12 sudo apt update…

BTW, I just realized that the THETA X can download and install the plug-ins directly from the camera body without any computer or mobile phone. There may be a way to make the process easier on Linux in the future.

In my test, I had to use Vysor to set the permissions of the plugin before I could use it. Also, we might need to use the official mobile app or WebAPI or USB API to set the plug-in that will boot. 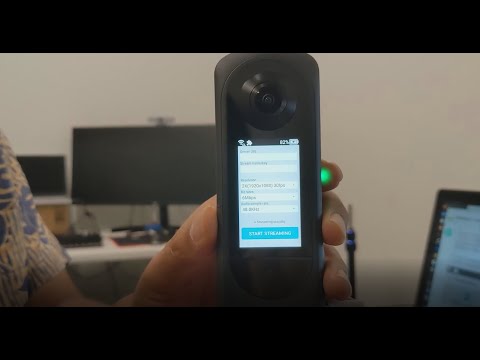