TOKYO, June 27, 2018 /PRNewswire/ – Ricoh today announced that the RICOH THETA Plug-in Partner Program, including development tools and support for members, has gone live. The program—initially announced in January 2018 and unique in the 360-degree/virtual reality camera industry—allows third-party developers to create their own Android™-based plug-ins for the RICOH THETA V, a camera capable of capturing fully-spherical photos and 4K video. 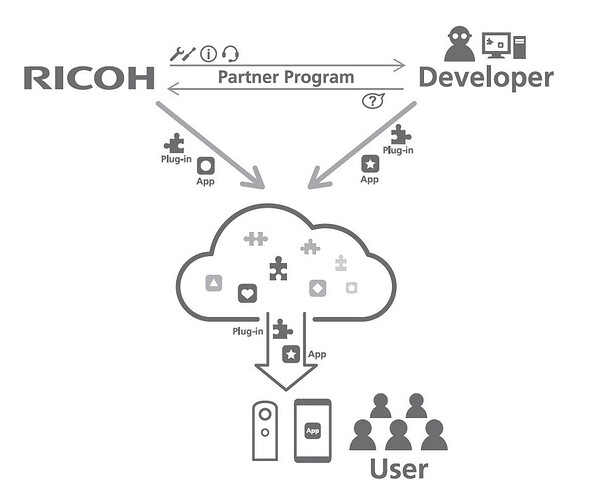 The RICOH THETA V incorporates an Android-based operation system. Given this open architecture, the camera’s functionality can be further expanded by installing plug-ins.

As part of the program, Ricoh made available the Ricoh THETA V application programming interface (API) and software-development kit (SDK) in April. Now, with the official start of the program, Ricoh is providing additional resources for plug-in development. Once individuals sign up to become members of the RICOH THETA Plug-in Partner Program, they can access tools and online support. RICOH anticipates interest from developers in a variety of vertical markets to create plug-ins that will deliver customized functionality for the THETA V. Members can upload and share plug-ins on the RICOH THETA Plug-in Store, which will open to consumers and businesses in July 2018.

To date, Ricoh has internally developed two plug-ins, which come pre-installed in the RICOH THETA V camera. These are Remote Playback*, which allows mirror playback of 360-degree still images and video data stored on the camera on a large screen monitor; and USB Data Transfer, which enables still images and videos captured by the RICOH THETA V to be transferred to a USB storage device.

In addition, Ricoh will be releasing three additional plug-ins when the Plug-in Store goes live next month. These include “wireless live streaming,” which enables wireless live-streaming on YouTube™; “automatic face blur,” which provides facial recognition and enables faces to be blurred in images to protect the privacy of subjects; and “file cloud upload,” which automatically uploads the images saved on RICOH THETA V to Google Photos™ when connected to a router.

*Other devices are required, including a separate wireless display adapter.
Android, YouTube, and Google Photos are registered trademark of Google Inc.
All other trademarks are the property of their respective owners.

Ricoh is empowering digital workplaces using innovative technologies and services enabling individuals to work smarter. For more than 80 years, Ricoh has been driving innovation and is a leading provider of document management solutions, IT services, commercial and industrial printing, digital cameras, and industrial systems.

When a person signs up for the partner program, how does the camera get unlocked and get placed into developer mode? Any chance you can ask people you know at Ricoh about this process? In particular, if developers sign up and they’re outside the SF Bay Area, can they get their camera unlocked?

This announcement only applies to THETA V developers. And only unlocked Vs can be used for development.

First, you register for the Plug-in Partner Program and send in the serial number of you THETA V. That includes sending a picture of the serial number from the bottom of your V. Second, approximately a day later (I think they say they will contact you “within 5 working days,” actually) you will get access to a RICOH THETA desktop app that will allow you to connect to your V by USB and unlock it yourself.

Then you’re ready to go!

you will get access to a RICOH THETA desktop app that will allow you to connect to your V by USB and unlock it yourself.

Great. This means that anyone in the world can potentially start developing plug-ins in the next week?

Yes, that’s exactly what this means. Nice wide access for anyone around the globe interested in customizing and extending their THETA V!

Yes, that’s exactly what this means. Nice wide access for anyone around the globe interested in customizing and extending their THETA V!

I updated the information in the guide below to reflect the new process. I also updated the events section. Right now, the next event is Disrupt SF, Sept 5-7, but maybe there will be a workshop or meetup before then?