Apply rotation and zoom to stills in seconds. Other Möbius transformations too

I wrote a simple web app to rotate equirectangular images in order to fix orientation or tilt issues. The app works quickly and with a few clicks. It is all done in the browser, your photos are not sent to any server. It is open source.

It also does conformal zoom. In a normal non-360 photo, zooming means that some of the original photo goes off-screen. But there is no ‘off-screen’ on a 360 photo. So if you zoom (expand) in one area of the screen then the photo has to be scrunched somewhere else. Using Möbius transformation, this app does just such a zoom in a way that is conformal (angle preserving).

There are several other fun options to morph your images. For instance you can create branch points so the same image is tiled seamlessly, e.g.:

You can use mathematical transformations to get infinite tilings: 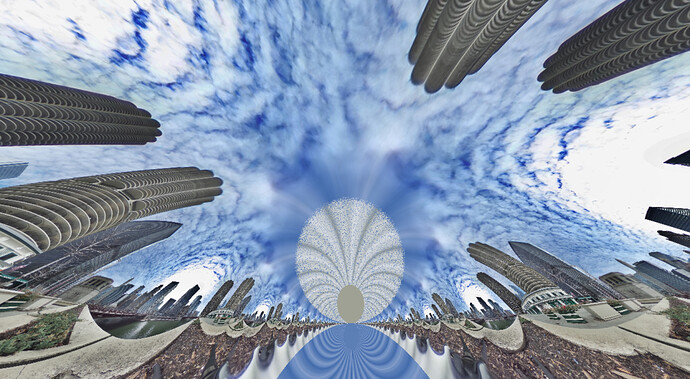 If you want to dabble with the code, go ahead (Apache 2.0 license): GitHub - rwoodley/SphericalPhotoToolkit: A WebGL app to allow rotating and zooming spherical photos (aka 360 photos).

The code uses WebGL/Three.js. The idea for this app is based on the work done by mathematician Henry Segerman and Vi Hart.

This is incredible. I need to spend some serious time with this. Thanks for publishing this. Wonderful.

Agree with @codetricity, I’m very excited to test this out more!