Can RICOH THETA Z1 be used in Unity as a webcam?

Hi everyone,
We want to build a small VR conferencing app using Unity. I see that there were a lot of posts about connecting Ricoh Theta V with Unity via USB cable (like a webcam) to live stream 4K, but I couldn’t find any post about connecting the newer Z1 camera to Unity. Did someone successfully managed to connect it to Unity via USB? I like the larger sensor on Z1 and the image quality it produces, that is why I would like to go with it.

Thank you and have a nice day.

Just curious if you’ve had luck streaming the camera directly in Unity? I keep getting “Could not connect pins - RenderStream()” when playing the scene.

The only way I’ve managed to do it is with a ridiculous hack, just so I can at least develop while finding a real solution:

I mean…it works haha. But definitely not a realistic or usable option.

We ended up buying the RICOH Theta V, and it works fine with Unity. If you manage to solve the problem could you please make a post here. Thanks.

Thank you for the update. Sorry you had to buy a THETA V. I haven’t got around to testing it with the Z1, but still intend to.

it appears that @RicoB has got it to work with a hack, likely the hack described below.

The only way I’ve managed to do it is with a ridiculous hack, just so I can at least develop while finding a real solution:

You can likely edit the register with regedit and create a fake device driver for RICOH THETA Z1 4K. I have not tried this yet. You can find the HKEY by searching for RICOH THETA

This is for the THETA V. 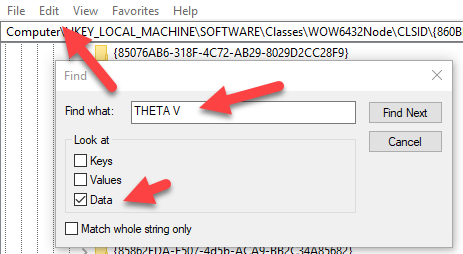 The key will be different for Z1. 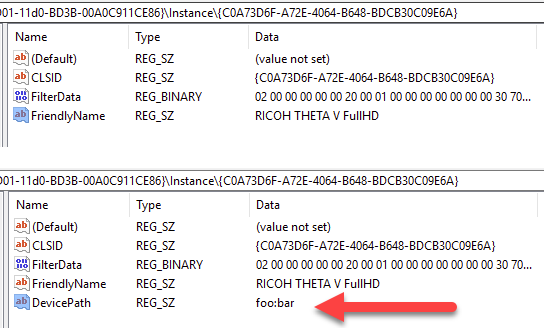 From roughly Mar 2018, the hack was no longer needed with THETA V as RICOH incorporated a similar hack into the driver 1.0.1.

What I want to do is to first test this myself with the Z1 and then send a report to some guys I know at RICOH.

If you hack the registry on your Windows machine, you will need to hack the register for every Windows computer you use with the Z1. Thus, it’s not a good solution for commercial deployment if you sell your app. However, it may be useful for prototyping and demos. Also, I don’t know if it works with Z1 as I have not tested it yet.

Btw, the hack I did was meant as a figure of speech hack…not a real “registry hack”. I just streamed the ricoh camera from MPC-HC to OBS, through NDI, to Unity. It was just for testing purposes. Quality and delay was pretty bad.

So I created a new Key under “Instance” using a CLSID I found for the Z1 searching the registry (It seems the key name is the same as the CLSID for all other cameras, so I did that), then added all the necessary String inside (ie. FriendlyName, DevicePath, CLID,etc. - except FilterData cause I couldn’t find it or understand). Results: same issue, unfortunately.

Here are my findings, though:

@RicoB, thank you for reporting back with these detailed results. I will take two actions in parallel.

Your information is useful. It sounds similar to the problem we had with the THETA V initially. If you have time, can you post the version of Unity you are using.

That’s great news! It’s nice to see a forum being so active and people interested in resolving issues for a relatively “niche” product. Or maybe I hadn’t realized how big the Ricoh 360 camera customer base had grown in the past few years.

Anyway, all my tests have been with Unity 2019.1.0f2. I will try a blank project with the newest version of unity on Monday, though. Was delaying upgrading since we already have a working project using our Nokia OZO, and it’s always a risk upgrading with a product that is no longer technically supported.

Alright, so I tried with the newest version of Unity today and it still has the same issue.

One thing I noticed is when I stream the camera live in MPC-HC, a big “LIVE” word starts blinking on the camera’s small screen. When I play the scene in Unity, the camera quickly flashes the “LIVE” words then it disappears, as if it connected to it for a second, then just disconnects due to the “connect pins” issue.

Thanks for this report on your tests. We saw a similar thing with the THETA V. MPC-HC could detect the hardware device driver (THETA V or THETA Z1) on Windows. However, other software such as Unity and OBS (Open Broadcaster Software) required the use of the software device driver. In addition, Unity also needed non-blank fields as described above.

Just so you know, for the THETA V,

The Windows software for the THETA V I’m referring to is here:

This software may need to be updated for the THETA Z1.

I’m sharing old information right now, I need to test this more with the Z1 before I have an opinion on the current state of Z1 live streaming with Unity.

Note that if you have access to MacOS, it might be worth trying Unity on MacOS as it uses a different driver. The test below with the THETA V was done on a Windows machine with dual-boot MacOS.

The THETA V streams a 4K equirectangular video over USB. It appears to Unity as a normal webcam called RICOH THETA V. The video is already stitched. You just need to attach a WebCamTexture to a 3D sphere and you’ll have a simple VR application. To get started with live streaming an equirectangular video from the THETA V, first create a new project in Unity. Add A Sphere [image] Scale the sphere to a reasonable size such as 8 8 8. [image] You’ll have a simple scene like this. It just has a …

Update 10/1 I am looking for the software driver for the Z1. Have you seen any download links for a Z1 live streaming driver? I have a note out to a person at RICOH about this.

On the Z1, I have this device on Windows 10, but it is not appearing in OBS. 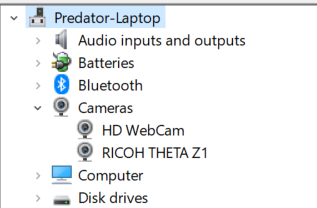 If it’s not working on OBS, I don’t think it will work on Unity. I’m going to try and get the Z1 to stream with OBS before I test it with Unity.

I tried to stream with MPC-HC and I can’t get the video stream to appear right now. 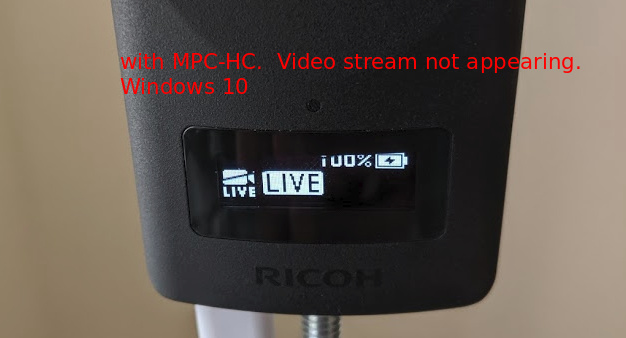 One thing I noticed is when I stream the camera live in MPC-HC, a big “LIVE” word starts blinking on the camera’s small screen.

Is the video stream appearing inside of the preview window of MPC-HC? Can you post a screenshot of your settings?

@craig I finally got the Z1 working in Unity and OBS! It’s probably because of you, since you said you might be able to contact people at Ricoh.

Anyway, thanks so much for your help @craig

Here’s my code that I attached to a sphere to test it:

Nice! This is fantastic. I have it working with OBS and am upgrading Unity and Visual Studio in order to change my application from THETA V 4K to THETA Z1 4K. Just an FYI, the 4K driver is higher resolution, but you may experience lag if you’re transmitting the stream over the Internet. 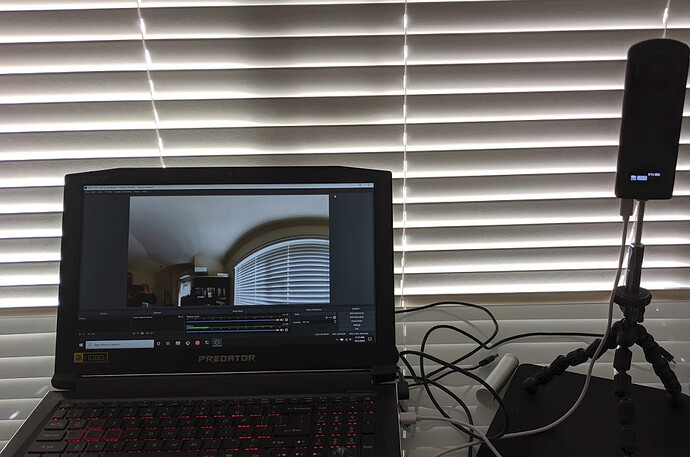 Great! I could only get FullHD version to be recognized in Unity for some reason. It is showing up in the registry, so I’m not sure why. I’ll try reinstalling it, or maybe even restarting my computer

By the way, I posted a little guide for anyone interested in getting their camera stream as a Unity skybox instead of a sphere:

Thank You for this! That conversation was exactly what I was going through. I got the 4K in Unity as well though following the same steps you did.