HowTo: Use RICOH THETA V with HTC Vive and SteamVR

New video providing a quick walkthrough of the core script and the three main tips to get the THETA V live stream to display properly in the HTC Vive headset. 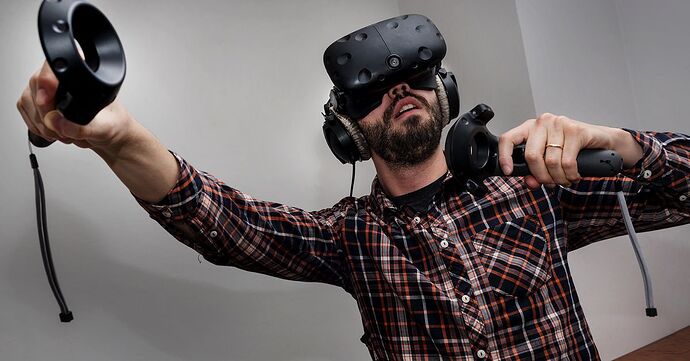 The arcade isn’t what it used to be

Do you also see these types of commercial applications for Oculus Rift (link on amazon) or Oculus Go (link on Amazon to 32GB model)? I’m wondering if it’s coincidence that Dave & Buster’s is using HTC Vive or if HTC Vive (link on Amazon) is generally more widely used for general VR experience platforms.

The two comments below the article are interesting: 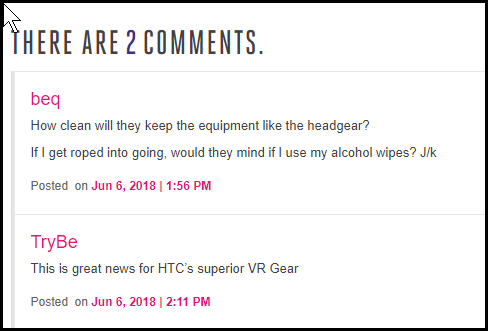 The personal hygiene concern is common. We saw this at the THETA VR Lounge in Palo Alto.

The solution we’re going to try at DeveloperWeek NY is to use the personal hygiene eye masks below. Please remember to pick them up from me in Palo Alto before you go to New York.

The second comment by TryBe seems to indicate a preference for HTC Vive gear.

After disucssions with @jcasman about the appearance of Mothra in the new upcoming Godzilla movie, I decided to put moths into the HTC Vive demo. I also updated the lighting source. 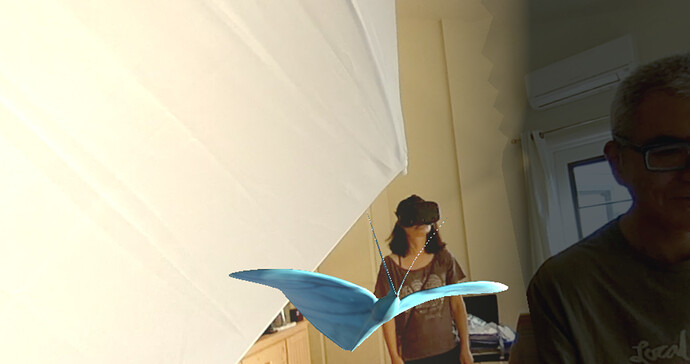 @jcasman for the demo at SIGGRAPH, I think the problem with intermittent dropped video feed might be related to the headset sync getting blocked if the base stations do not have a clear path to the headset.

I had a great time at SIGGRAPH in Vancouver. Met over a 150 people at the booth and demoed the live streaming THETA V in an HTC Vive headset to at least 60-70 people.

Headed to the show, grabbing a quick snack and charging up my THETA in SFO: 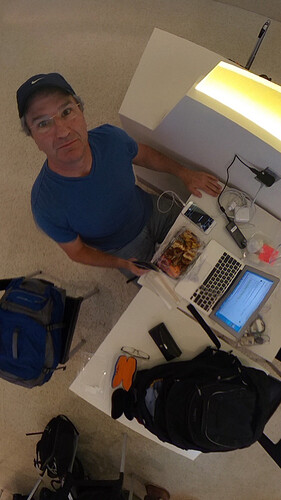 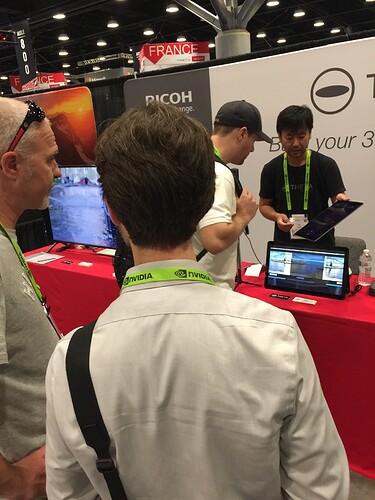 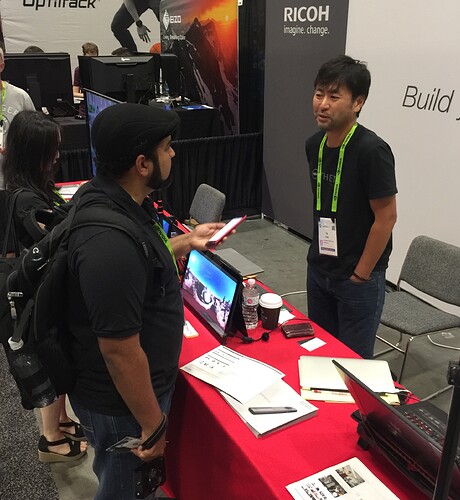 I’m in Canada, so I have to have at least one meal at Tim Horton’s: 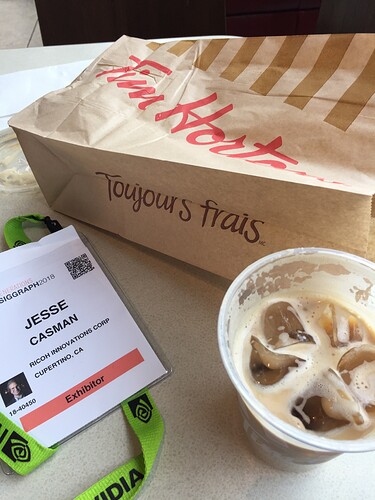 This is great information. I understand about using the THETA to grab HDRI data.

What would they use the 4K 360° live streaming for?

Do they need the live streaming into the HTC Vive headset? Does it serve any type of demo or mockup purpose in the VFX industry?

VFX guys like to capture HDR images with the THETA. They can light CG models using 360 HDRs. They get accurate lighting direction and intensity very quickly this way.

Wow, that’s a bit discouraging. Was there interest in the HTC Vive demo at SIGGRAPH? If there was, what is the possible application? Maybe they can use the live streaming as a form of visual monitoring?

If there wasn’t interest in the HTC Vive demo, we can try and build more examples of HDRI use, which is what I’m trying to do now.

As far as HDRI, there appears to be platforms like Unity and a set of platforms like Maya and Blender. We have some Unity examples to get the lighting information.

I’m thinking of going through this Blender example:

Hello, I tried to use both the tutorial and the executable app, but I encounter heavy lags. In unity, the fps that is displayed is ~17-19. I am using the provided cable to connect V with my laptop, which has the following specs: Intel Core i7 7700HQ @ 2.80GHz, 4095MB NVIDIA GeForce GTX 1080 (ASUStek Computer Inc), 16GB Ram.
I aim to use Theta V for a Telemetry project, so any help / insight would be useful

To help us replicate the test, can you tell us what technique you’re using to measure the framerate?

Besides getting the choppy feeling in the headset, I used the stats tab from Unity’s game menu and: https://assetstore.unity.com/packages/tools/integration/lite-fps-counter-probably-the-world-s-fastest-fps-counter-132638 , which I use in building most projects.

Thank you so much for your help, both here and in the DMs. I ended up using FullHD, with which I get 70-90 fps and no “delay” within the sphere. 4k still behaves as before, with low fps and black dragging spots when repositioning the head.

Hi, I purchased a Ricoh Theta V just because of this thread but I get the same choppiness that Taikinator experiences when playing the test binary. Do you know how to fix this? Is it using the wrong resolution?

I need to test this again with the newest version of Unity. There may be some problem with the demo now. The maximum fps that you could expect is 30fps under ideal conditions. When you turn your head rapidly there is some lag and choppiness.

You can see from the post below what a research group in Tokyo is doing to transmit the stream over a WAN.

When the camera moves, they are reducing the resolution to 3K.

Update 2/27/2019 I just tested this again with 4K video. Although it’s not as smooth as using something like VLC locally, it’s fairly smooth. I’m not getting any of the black dots.

Can you take a screencapture of the problem you’re facing?

Update March 4, 2019 I was at a Unity development meetup yesterday with @jcasman. The developer that presented mentioned that there were problems with different versions of SteamVR. He suggested using SteamVR from GitHub, not from the Steam Assets store. As the demo is old, it’s possible that the version of SteamVR it is using is old and needs to be updated.

There is lag. It’s not usable for an action game. The camera feed is more suitable for observation and visual documentation. It can be used for telepresence if latency is not a problem for your application. If you require precise timing, it is not a good solution.

Hello! I want to use the RICOH R Dev Kit and HTC VIVE headset to implement VR in Unity.I followed your steps, but the live steam did not show in VIVE. 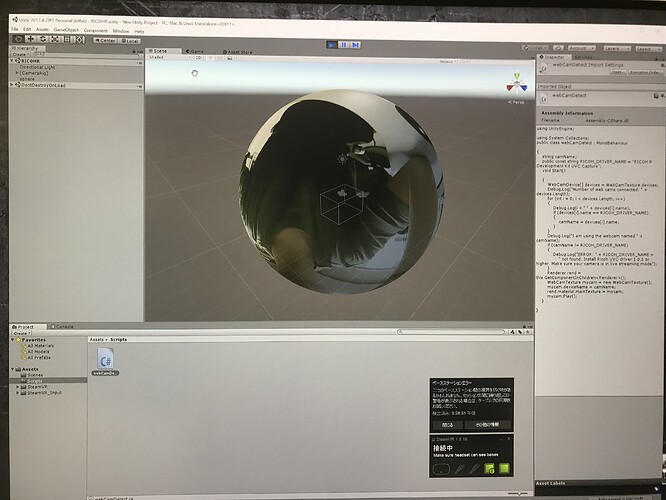 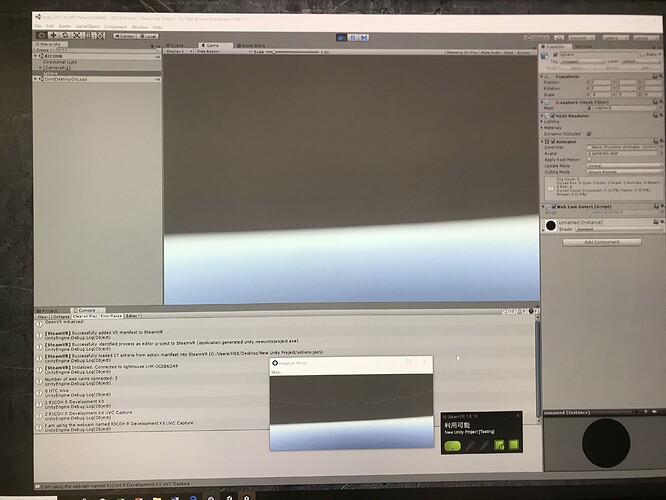 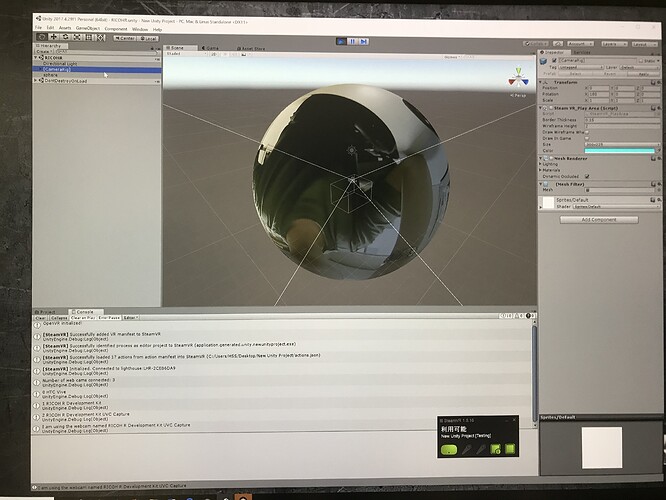 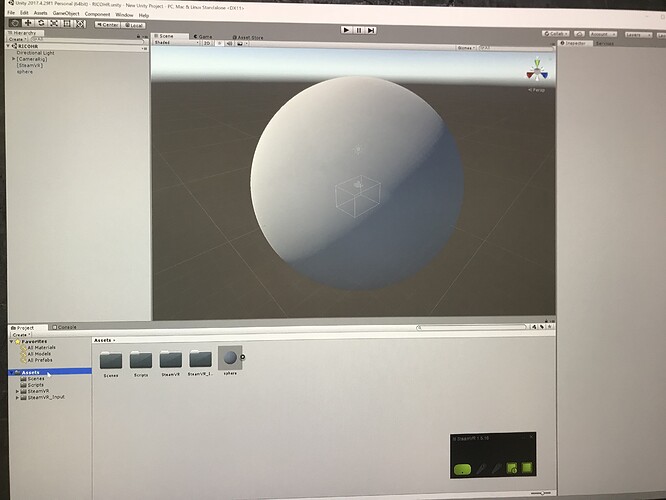 Hello codetricity,
I was researching into wireless streaming from the THETA V to the Oculus Go, but I need a stable setup with very low latency and thus decided to go for a wired solution. As I need to use a VR headset wihtout base stations or external sensors, I am thinking of using the Oculus Rift S for my project. Have you tried your THETA V + Unity setup with the Oculus Rift S?

I have not tried it with Oculus Rift. Community member @Litto was or is using it with an Oculus Rift.

I have an Oculus Rift so 2 Mics see screenshot. Problem is. Performance starts lagging (image) and there is still no audio

See Screenshot!) I did everything the way you did. I also used “RICOH THETA V FullHD” in the script. still lagging… Maybe you know what is missing…

It should theoretically work as the THETA appears as a UVC webcam to SteamVR.

Thanks for the advice!

As I need to use a VR headset wihtout base stations or external sensors, I am thinking of using the Oculus Rift S for my project.

@Tyler Have you made progress? What headset are you going to use?