There is a new THETA API version 2.1. The version 2.0 API still works for now, but it is recommended that you update your apps to ensure future compatibility.

App developers: Be aware these changes may affect your previously-published app in the future and it is your responsibility to make corresponding changes to either handle both versions or remind camera owners to update their firmware.

If you want to compare the different documentation versions, you can toggle between the two different versions using the green rectangle on the main API reference page. 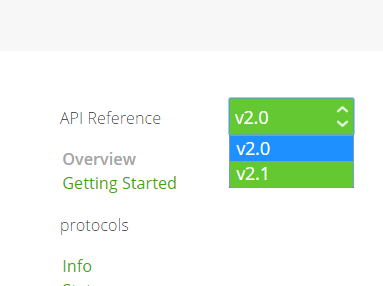 In your program, you can set the API version with camera.setOptions.

One of the major changes is that you do not have to specify the sessionId for command execution.

The _listAll command of version 2.0 has been replaced with listFiles

For the THETA S, the three APIs are:

You should use the API v2.1 (the WiFi) one for your applications. There is no reason to use v2.0. v2 USB API can be used if you application works better with a USB connection, which is probably only the case for an application with specialized hardware like a Raspberry Pi Zero controller. 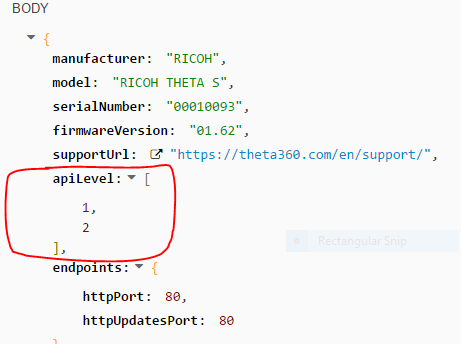 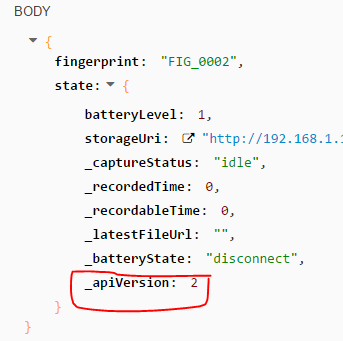 Can you tell me how to go about updating to 2.1?

Nevr mind - I got a pop-up with install option. All good

Yay, I love it when things work themselves out.

…though actually, what do you mean by “got a pop-up”? Can you describe this install option you’re talking about?

Thank you all for the help!
I am beginning to develop in python for ThetaV in Api2.1 and I tried the same command to take pictures in restlet and it worked but it kept giving me 400 in python3, can anyone help look for the problem,Much appreciated!

Thanks for taking a look at the API.

You may need to set the API version to 2 prior to taking a picture.

Set the API version with clientVersion

thank you for reply, I am confused by the APII version,
according to /state/, I am getting api 2.0, but I found all session id start session etc all gone, so I assume it is in the newest version and using the same api, I can get 200 for /state/

Did you specify the content-type header in the request?

I haven’t looked at the Python code in a while and don’t immediately know how to specify the content-type header with requests. Though, I think you need to do this.

I did a test with client mode that worked.

You can also use curl as an intermediary step and then move to Python once you have the prototype working.

I suspect you need to set the content-type header with Python requests. If you get it working, please post an example.

Just tested the code below with python3. works fine. I think that if you add the header, your code will work.

Remember that the THETA V can’t be plugged into your computer USB when you are using the Wi-Fi API.

Here’s the exact same code you can just copy and past into your text editor.

thanks , I found the problem is due to json.dumps() instead of using it I took json=thetacommand and it will work.

, I found the problem is due to json.dumps() instead of using it I took json=thetacommand and it will work.

First, congratulations! Second, thanks for letting us know what the problem was. It helps other people.

Please post updates of your project and adventure with coding.

I also would like to build a Python project, but instead of building a Python project, I’ve been spending time with Android Studio and the plug-in. This is cool, but I love the elegance and friendliness of Python.

If you want to share what your project vision is, please post. It may inspire me and others to build something in Python as well.

I built a lesson for my daughter using the Python GUI toolkit called kivy to test more of the API functions of the THETA camera. 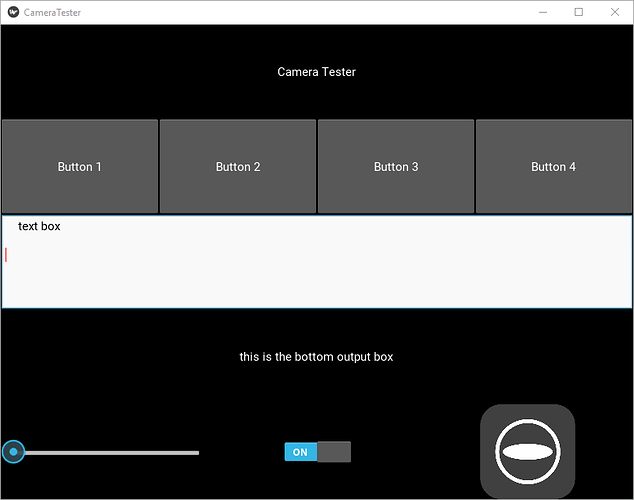 Previously, I worked with my son to build a used-car 360 picture taking system with Python and Pygame. In the screenshot below, the thing that looks like a tablet is actually a Raspberry Pi with touchscreen. 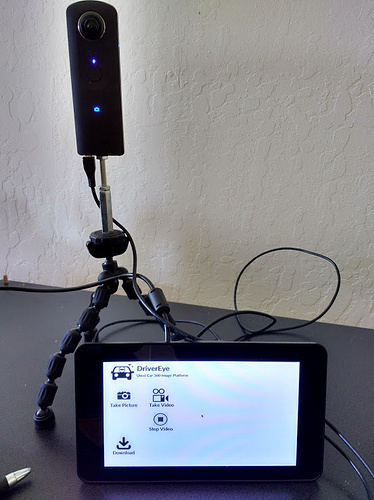 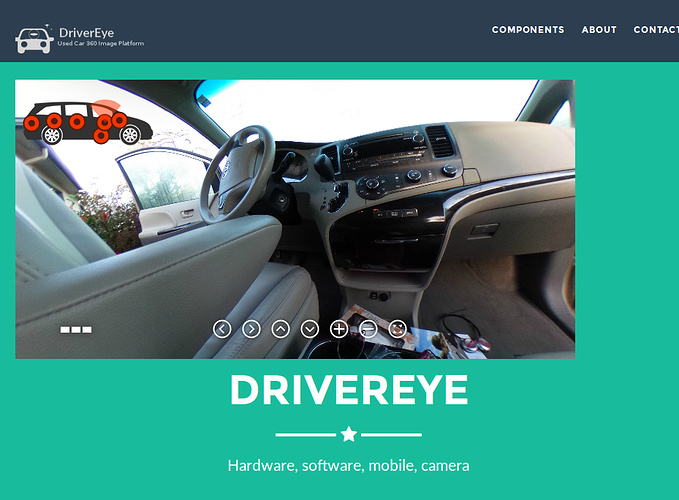 In the example below, I built a mobile app with Python to take take pictures for a prototype real estate site that was powered by A-Frame for the web-browser interface. I’m using Python to control the camera. The GUI Pygame. You can use RAPT to get the Pygrame app onto Android.

My early projects used Pygame simply because my son and I were familiar with it. I don’t think it’s a good choice for a GUI. Though, I used it and it was easy to use. If I were to start a new project, I would use kivy.

, I found the problem is due to json.dumps() instead of using it I took json=thetacommand and it will work.

@jasondaywalker, thanks a ton for posting, this looks like useful info. If you have a chance to share more details about your project and what you’re trying accomplish, I’d love to hear more.

Hi. I’ve got problem when the sample using v2.0 app just identity TheTA M15 without preview. I have to download sample using api v2.1 to open TheTa V. How can i combine both of them in only one app? My idea is identify appversion but still can’t find the difference in code in 2 ver of example.

The m15 uses ptp API, which is completely different from the THETA S and above.

You can try GetDeviceInfo with the m15 and see if it responds. If not, then use state with the Wi-Fi API to get the _apiVersion.