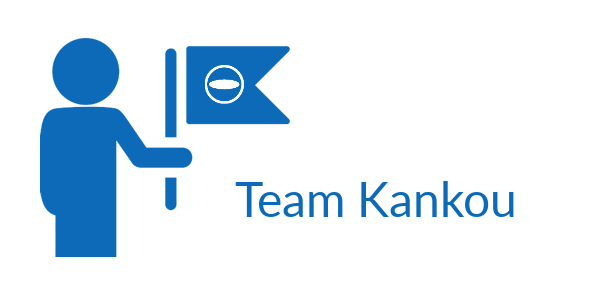 Team Kankou is an online hackathon team started with Unofficial Community Guide members @jcasman and @codetricity. This team cannot win any prizes. However, if you want to join us online for fun and potential glory, please add your ideas and code to the discussion.

Ideas will be discussed here any time and the project will be decided on between 4pm PT and 5pm PT on October 7th. After that, we’ll build the project. Although we’ll use THETA V cameras, you should be able to build parts of the project with either the THETA S or the SC.

Currently, we have these ideas: 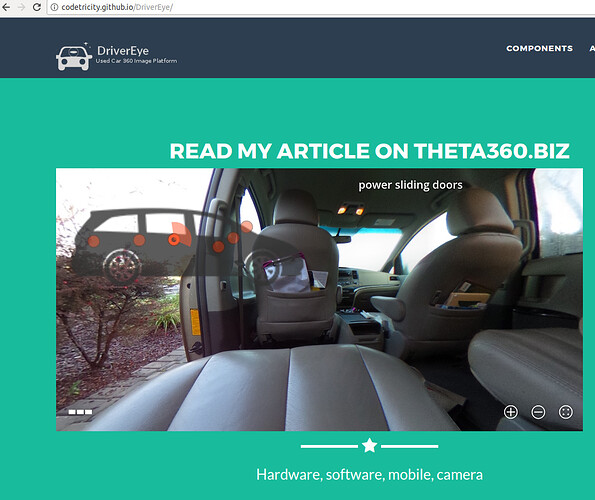 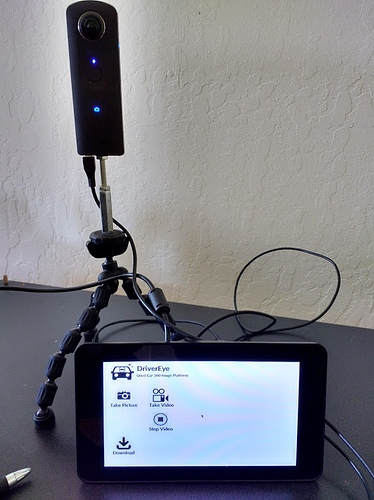 Use this template and create a virtual training room. 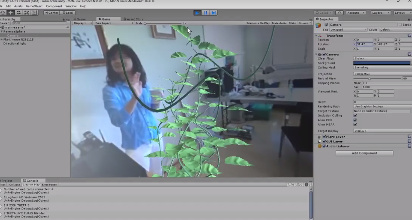 Other ideas for user interface

The ways to interact with 360 images inside a headset is wide open. Should they enter the sphere from a sphere, a square, a cylinder? 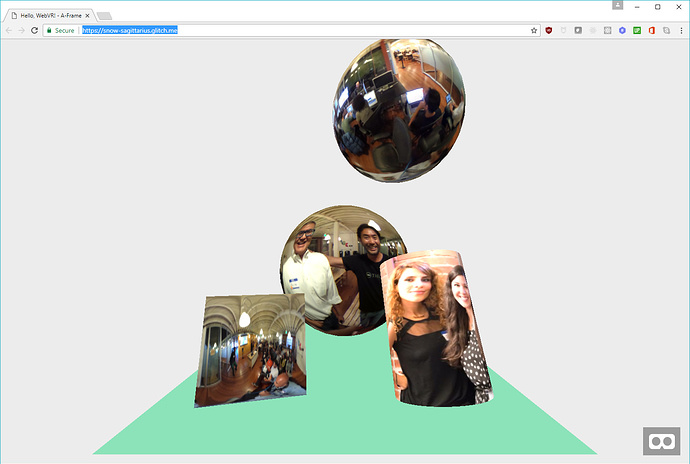 Do you overlay spheres inside of the main image sphere? 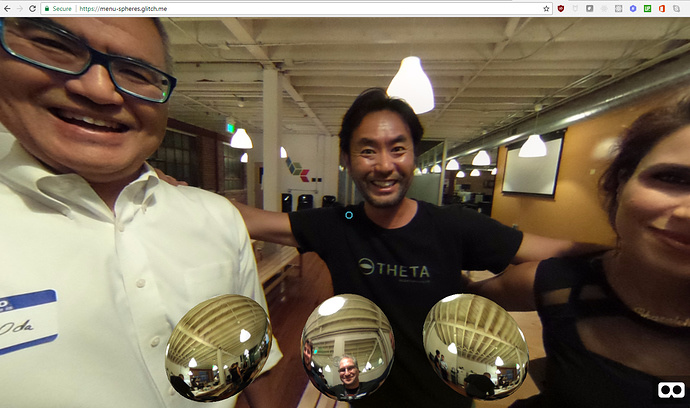 Do we create a menu at the bottom, possibly breaking the VR scheme? 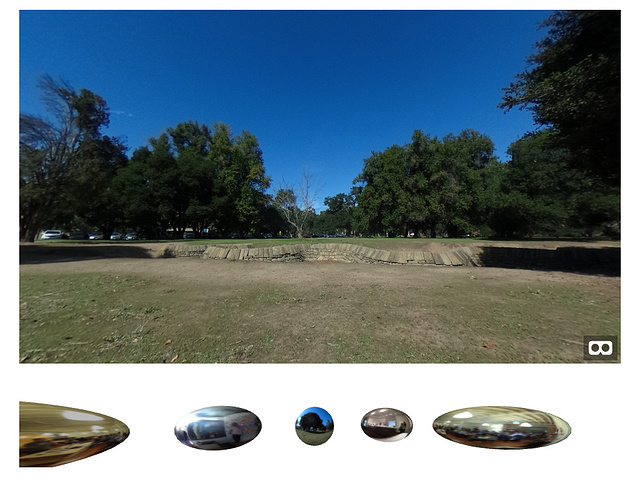 We’ll need to target Android and iOS phones as we don’t have HTC Vive or Rift headsets at home. If we build a Unity app, we’ll need to try and build it for Android, which we have no experience with.

One idea: We could build an extended A-Frame headset gallery that let’s the headset wearer move around within the Presidio in San Francisco. It would not be a large area, but they could go North-South-East-West for maybe two jumps in each direction. I could take the 360 images so that the content is interesting. 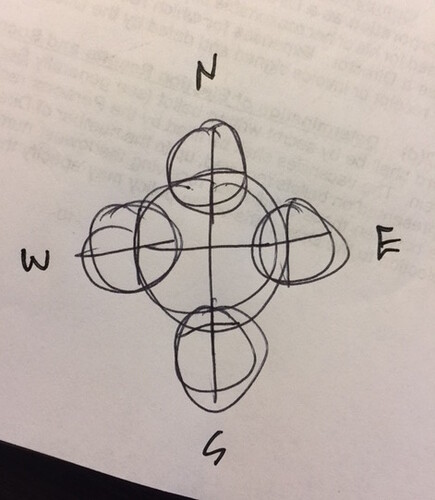 You’d need to set consistent spacing and direction, probably with a compass and measurement of the distance. How far to make the distance, like 30 feet from the radius in each of North, South, East, West? 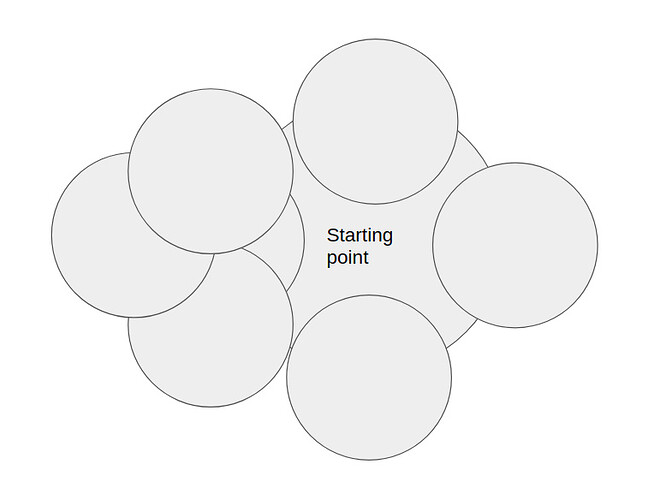 This could be like Google Streetview, but with some other AR stuff thrown into the sphere. Maybe like a Pokemon Go game?

Oh, oh, oh! We could add a small item, like a Pokemon Go character, something cool, that the user has to look around for. They would have to look around within the spheres, jumping from one to the next, in order to search for and find the object. A scavenger hunt!

So, the prize they find would be on the third sphere out, like for example, looking for a panda?

My daughter built some panda icons in A-Frame, so no shortage of those… Can you find the panda in the screenshot below? 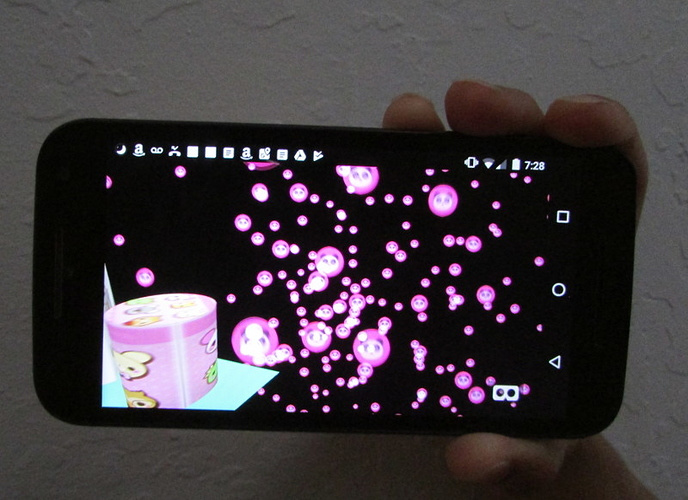 Yes, that’s the idea. Your daughter is probably way better at coming up with some cool panda character for us.

Scavenger hunt where kids or people look for things inside of VR headset or cardboard. 3D assets are placed inside of the spheres for prizes and clues. Winning the game is based on finding the final item. Could mix with historical or geographical learning about physical space. Physical space is built from real 360 images.

Just a quick glance at A-Frame, the position of the menu image appears to not include any directional data. Position is set manually, as in the code here:

This still might work just fine, if we know North in the images.

I can rotate the entire sphere. See this:

Note that the attribute is rotation and NOT position for the entire sphere. If we’re trying to put one menu 180 degrees from another menu, how do we do it?

If we can’t place the menus 180 degrees apart, we need to switch to another idea.

If we just move the x coordinate of the menu, we’ll get something like this, where the image goes off on one axis only. 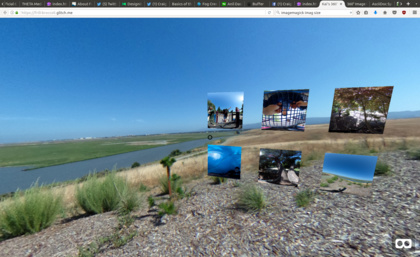 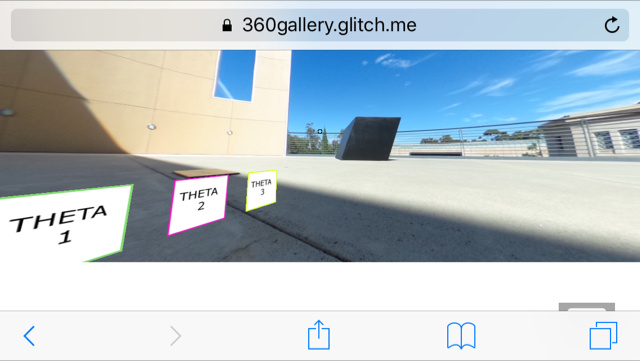 This seems like it would be a common problem with a solution out there. Google search?

This is not a solution, but look what Kieran built 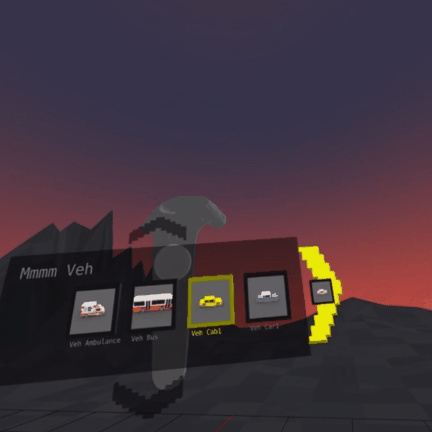 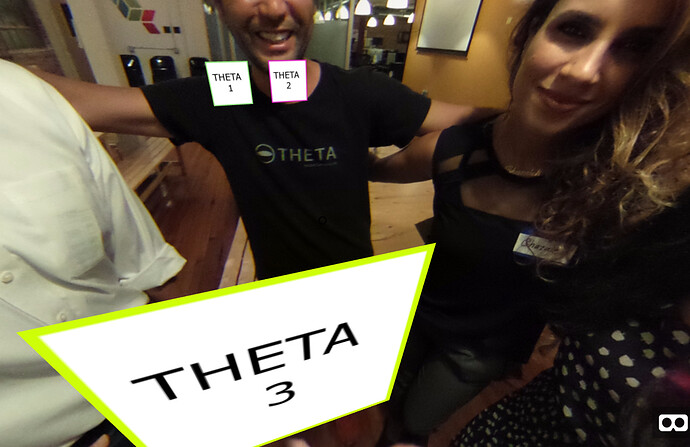 The placement of the spheres work, but it may take time to get the fuse links to work.

I think I can get it to work, but it seems fairly unpolished. I’m thinking of going back to Unity.

Remember the Bugatti example using the FPS built-in libraries with Unity and WebGL? We used the THETA images from the contest. The example below uses an image from a temple. 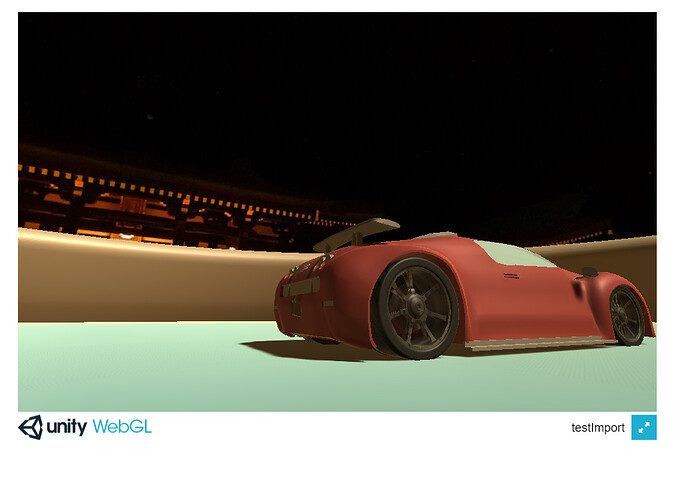 Unity might be a better option for still images as well as live streaming if we’re dealing with movement inside of the sphere.

Unless we find a library for A-Frame that handles the FPS (First-Person-Shooter) movements that Unity has built-in, we’ll need to build our own movement controls for walking inside the sphere, which is going to suck up time. There’s a lot of stuff already built into Unity that will make dev easier.

First step could be to find assets to put into the live stream. I think the hockey rink is too complex.

We’re working on an idea for a VR enabled real estate app. You can look through a whole house while sitting at your desk, using a headset that’s running from a browser on your smartphone.

On the real estate agent side, there’s a mobile app, build with JavaScript and Cordova, where there interface uses the RICOH THETA API to take and store pictures. The agent just presses one button in each separate room, and has to enter a small amount of information on where the picture is. (Probably a pulldown menu of rooms in a house.) 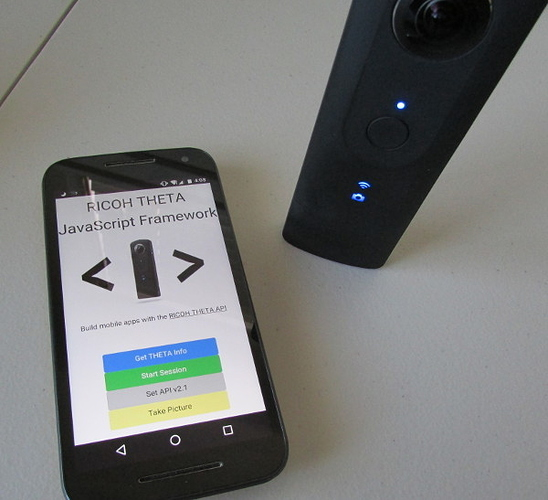 On the house buyer side, we settled on Glitch + A-Frame, as a great framework for getting VR content into a headset quickly. We built a small world, starting outside a door, moving into a hallway, and finally into an office. There are clear floating boxes, and a small circle where your headset is aimed. 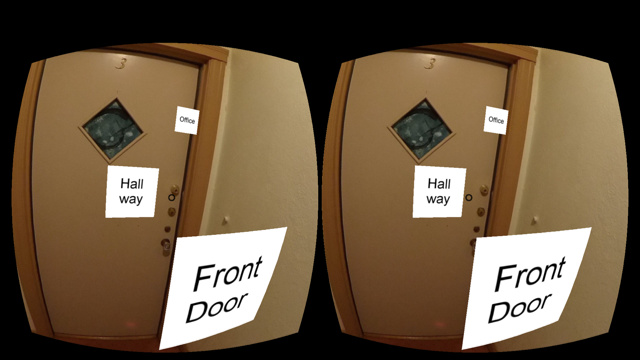 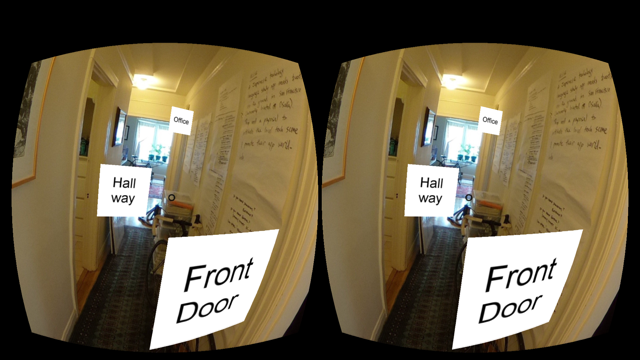 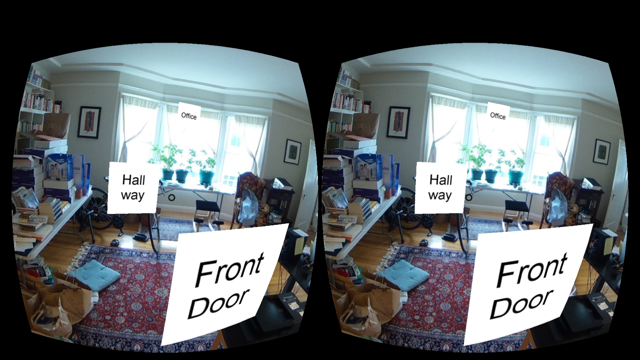 Here’s the A-Frame code we’re running in Glitch. This can be viewed at kankou.glitch.me - Comments welcome!

EXTRA TIPS: If you want to show are general environment with the THETA, taking pictures at eye level provides a very familiar point of view. We used a tripod (careful, tipping over and scratching lens is a common problem) and a extendable monopod. (See picture below.)

Also, suggest setting the THETA “Shooting Method” to Self-timer and 10 seconds, so you can step out of the picture. 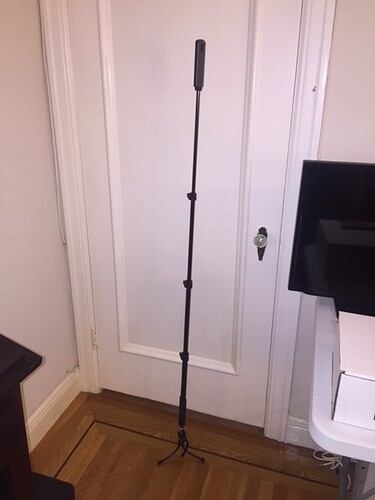 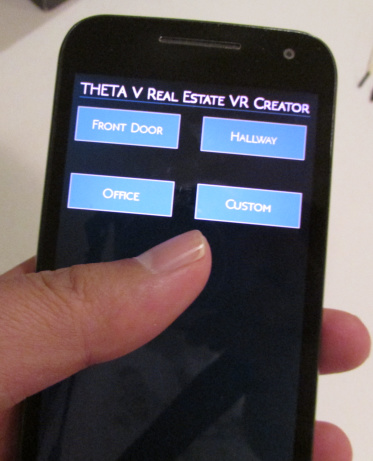 This is a first step to improve the efficiency of real-estate agents in creating a VR scene for their clients. As there is still manual creation required, the pictures can be sent to people anywhere in the world to reduce costs of building the VR scene. Only HTML and A-Frame knowledge is required.

This version with equirectangular image displayed below main button set. 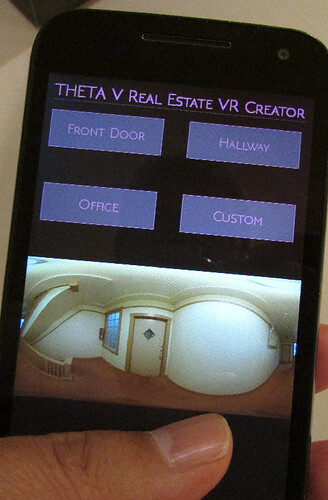 @jcasman let’s meet at 11am PT tomorrow to discuss next steps and how to finish the project.

11am PT sounds great, talk to you then

About a year ago, we built this demo using an Android emulator.

The primary differences between the old demo from a year ago and the current demo: 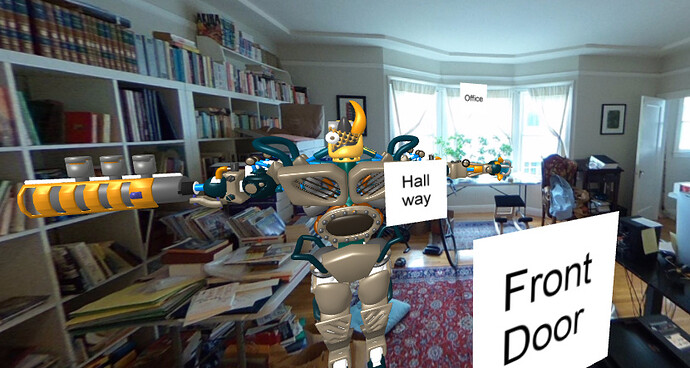 In A-Saturday-Night, we used the glTF format for all of the 3D content. glTF (gl Transmission Format) is a new 3D file format positioning itself as "the JPEG of 3D" for the Web. glTF has features such as JSON descriptions of entire scenes included...

Installed collada2gltf on my Linux workstation 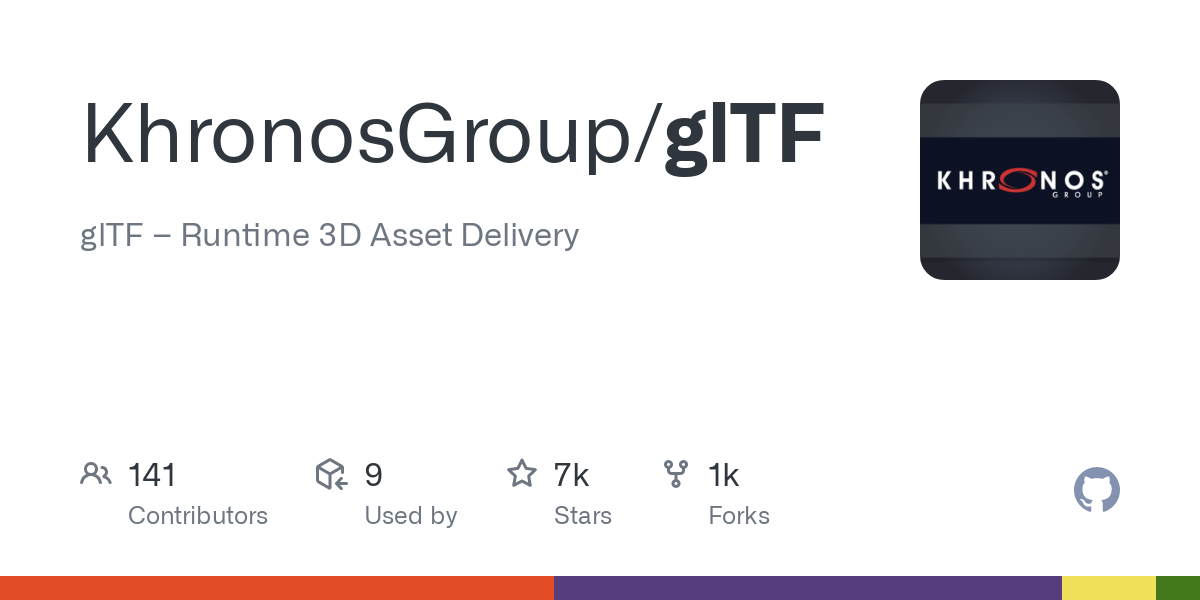 About to break for lunch. 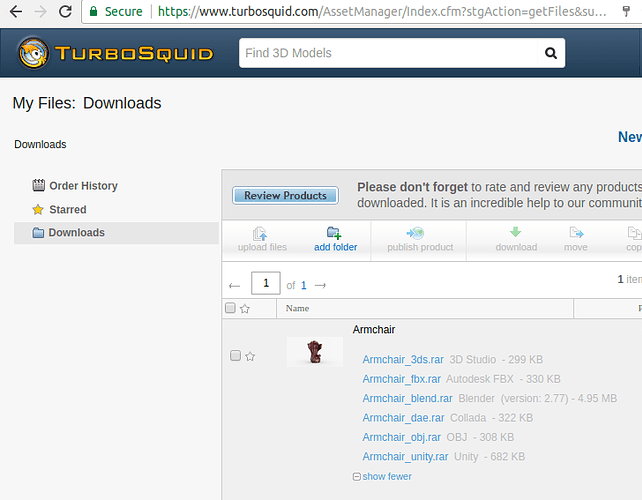 First attempt to import into scene did not work. Have armchair in blender now. 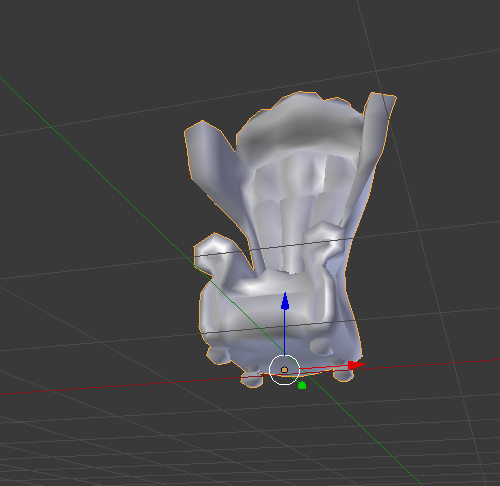 Attempting to load 4 files into Glitch.

Getting this error message. Will move to another server.

Some progress. That white thing in the lower left is the chair. 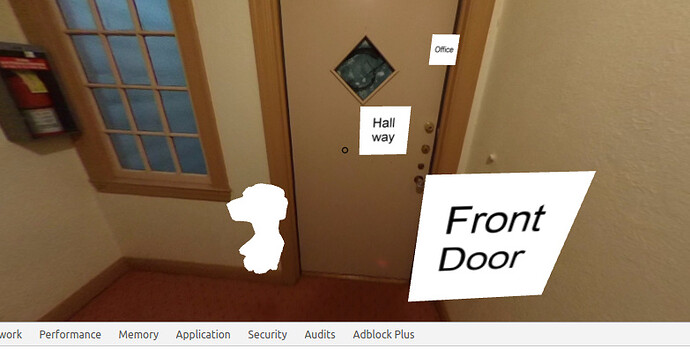 Have this error message, so will try and get the colors to work.

I inserted the chair into the Oppkey world headquarters office. 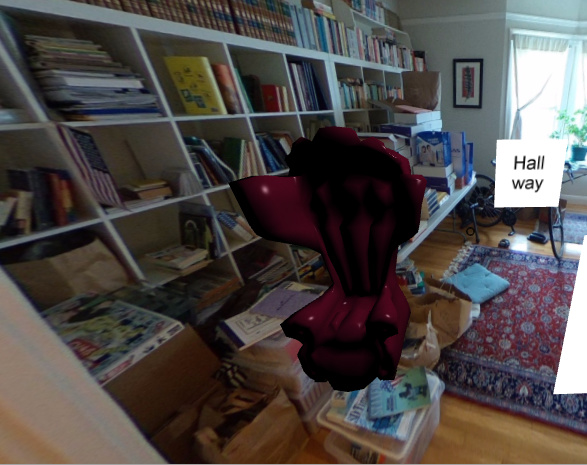 Rotated and put on stack of boxes. 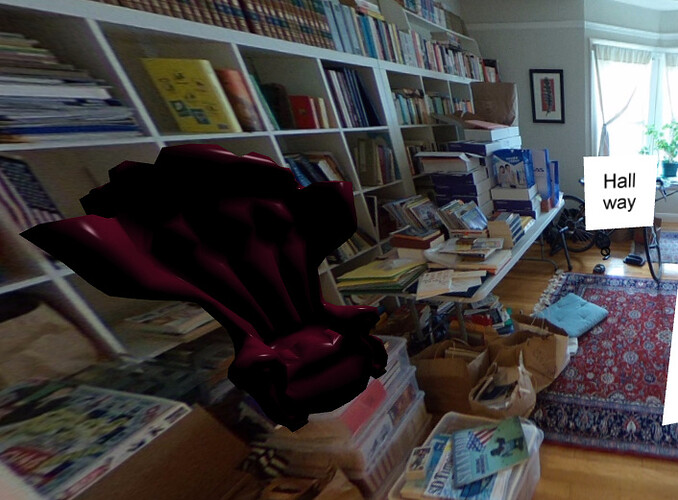 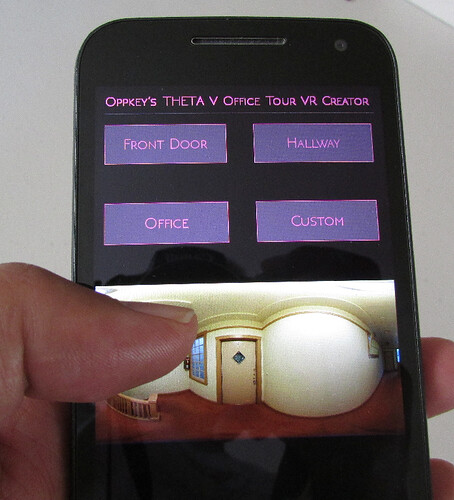 Tried several different ways of improving the experience for our VR real estate users. Adding text to the first sphere - an introduction with instructions - seemed like a good way to start users walking through the tour. I found ways to add text but was not able to successfully add the components needed:

How can I display text in A-Frame?

We settled on wanting to brand the tour more directly. We imported our logo - Oppkey - and could do more to make it useful as a tour of an office or other location that you’re showing off, perhaps as part of an interview process, and showing where they will actually be working will help recruit candidates. If so, company branding could possibly be an important item.

The Oppkey logo now guides the viewer to the office:

The Oppkey logo now guides the viewer to the office:

Nice use of that logo. I think we have a solid entry for the Unofficial category of the hackathon. I learned quite a bit during the virtual hackathon.

Here’s a presentation of our full project, submitted 13 minutes before the deadline!