Information translated from the original Japanese by the Unofficial Guide. Original article posted in 360 Worlds on August 26, 2017. 360 Worlds tagline is “Covering topics on 360 panaromas focused around the RICOH THETA.”

Take a look at this video: 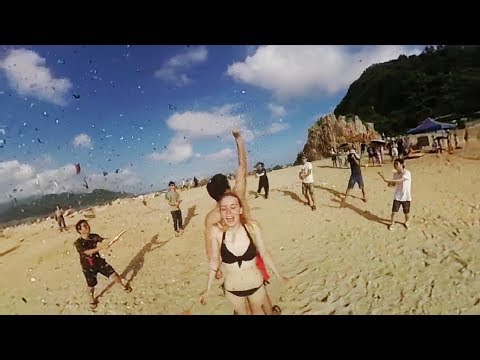 It’s a video produced using the new Insta360 that’s being announced on Aug 28. The video is available publicly on YouTube, but people who’ve seen it are surprised at this seemingly new technology.

Hang on just a minute!

Actually, it can be produced pretty easily using a RICOH THETA S. Here we’ve made a video without much difficulty: 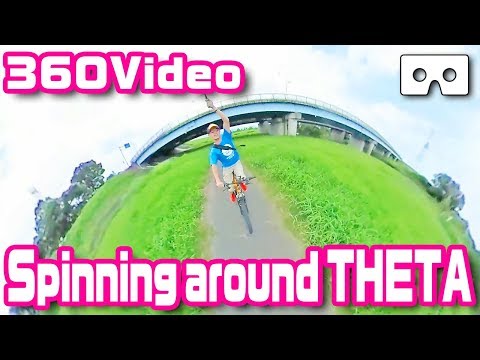 Attach a grip to the bottom of a selfie stick, and then all you need to do is record as you’re twirling the THETA around and around. (When filming, we are extending only one section of the selfie stick.) 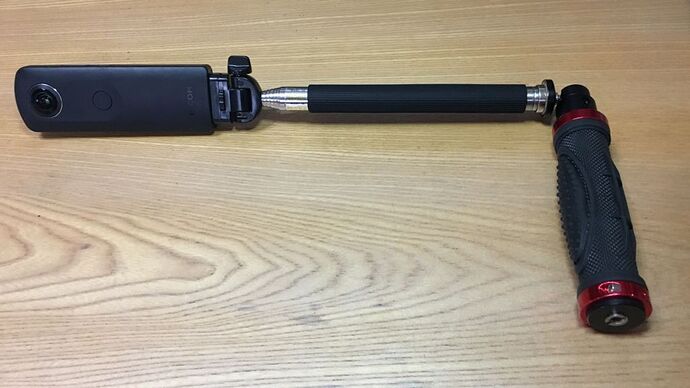 Then take that video, and in After Effects, apply the half speed slow motion (15 fps), do color tone correction, and with the Skybox plugin just do a little bit of touch up. 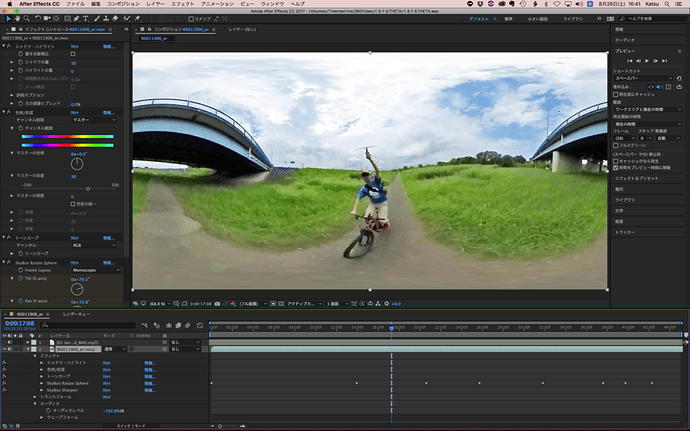 Ok, well, we were able to do it. But if you take a look at the video, you can tell that the resolution and the frame rate are not at all good enough.

Or maybe it’s not even a panorama camera? Except you can see at least one stitch line, so it’s got to have at least two lenses…

Either way, I’m looking forward to the announcement on Aug 28 at 11pm!

Dang. The Insta360 One has a lot of cool features. With this camera and the Xiaomi 360 camera getting great reviews it is hard to wait for the new Theta, but I’m a loyalist

I would like to see Ricoh add a new app or add some new functionality to an existing app to do manipulated edits of 360 footage (what GoPro is calling “over capture”) - I’ve used the Insta360 Studio desktop app to give Theta videos that treatment and I think being able to manipulate 360 footage in post will become a standard use for 360 cameras. I’ve loved the Theta family of apps and this seems like a logical evolution.

Note that all the “cool features” Insta360 is selling are not camera-specific but done in post-production!

Looking at the product page: https://www.insta360.com/product/insta360-one/ these features are:

Insta360 has done a really good marketing job! They are not primarily addressing the ‘true 360’ customer segment but that of ‘friends & family action’ (GoPro and alikes) and extend this significantly.

Ricoh could actually add these features to their THETA line if they are willing and capable to invest in a post-production software development.

Actually, there are some camera-specific features:

The 240fps timebullet is done in software (optical flow ?)

The 120fps + the gyroscopic stabilization makes the difference to me

Of course the ONE has also some nice tech specs: 4K video is a must, we THETA fans are still eagerly waiting for. Photo raw and video log encoding are also on our wish list in order to handle the dynamic range appropriately. These are my favorites.

The frame rate of 120 fps sounds great but the resolution is just too low for my taste, even less than FHD. Maybe it’s possible to use 60 or even 30 fps instead for bullet timing, as slow motion via optical flow can work surprisingly well. I’ve used proDAD’s ReSpeedr for action videos but not 360° as it can’t handle the equirectangular format correctly.

I wonder why Insta360 has chosen to use the gyro for image stabilization. This should be implementable completely in software.

Ricoh could actually add these features to their THETA line if they are willing and capable to invest in a post-production software development.

As the new THETA will have a full OS built into the camera, it should be possible to do more post-production work inside the camera. The OS is Android-based, though I suspect that it will take time before this is opened up to developers. One challenge for Ricoh is to figure out what features customers want.

IMO, it would be awesome if we could somehow work with the community to prototype some of these features and show it to Ricoh.

@jcasman and I have these communication channels with Ricoh managers:

If you or anyone in the community wanted to propose to prototype an application for Ricoh for either fun or money, feel free to write down some ideas in a public or private note. If it were for payment, I imagine that the project would have to be small initially, like no more than a few thousand dollars.