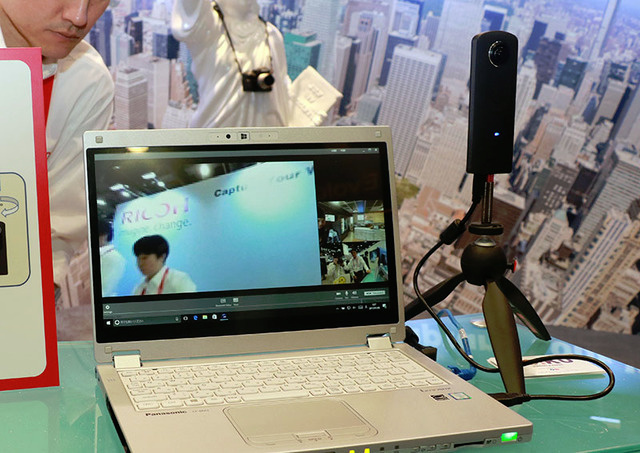 RICOH demoed a cool 360 video conferencing cloud platform at CES. It appears that the demo was based on RICOH’s conference service that is used in Japan, both internally at RICOH and commercially. We have not confirmed this with RICOH, but it appears to be based on that proven system. If anyone has more information on this 360 conferencing system, please post it here.

Back in June of 2016, I wrote an extensive article of a demo open source video conferencing system that RICOH released as sample code to stimulate interest in their THETA x IoT Developer Contest. That demo used the RICOH Cloud API for WebRTC signalling only. The video data did not go through the RICOH cloud.

From what I can tell, this new demo uses a commercial, large-scale system that makes it easy to use 360 video conferencing.

Here’s a recap of where the Unofficial Guide Community is with regards to 360 video conferencing or live streaming with the THETA.

As of November 2016, RICOH updated the firmware of the THETA to 01.82 which added the ability to stream video from the USB port at 1080p @ 30fps. They also released UVC FullHD Blender to handle the stitching of the two dual-fisheye spheres into equirectangular. With this combo, we’re set up to get a good 360 video conference experience. But, we still face challenges.

Although Skype and Google Hangouts work with THETA UVC, you can’t do navigation. Also, in my experience, it’s not a smooth session, probably because my upstream bandwidth is a meager 1.5M bps.

YouTube works fine, but the setup with OBS is a bit daunting. YouTube also has a lag of anywhere from 3 to 8 seconds. I have not run extensive tests, but this is my guess on the latency.

What we really need is something with the ease of use of Skype or Google Hangouts. While it’s likely that 360 navigation functionality will be added into Skype, Hangouts, and Facebook Messenger in the future, it doesn’t exist today. The RICOH demo gives us a glimpse for what might be possible in the future. What I’d really like to see is a demo of 360 video conferencing in a headset. Maybe the Sony PlayStation VR will add this in the future by working with RICOH? They already appear to have collaborated on video files and still images. Hope they make that cool application soon.

The technology exists in different places today. The companies just need to make things easier to use and bring the technology to the people.

Note: Some of this information was translated from Phile-web and other Japanese sources.

It looks like there is a new model of the Theta that just came out.

This does hardware stitching specifically for live streaming,

The main thing to note is that this appears to be a developer kit, not a commercially available camera. In other words, it’s got features for developers, you apply to be in the program, a limited number are loaned/sold. That’s my understanding. I don’t have any more info than what’s publicly available.