Yep another battery thread. Just thought I’d share my particular symptoms. Im sitting here typing this with the Z1 in front of me, turned on. I started with a 88% charge and I’m watching it drop 2% every two minutes or so. Wifi and BT are off. I did the “Wifi reset” procedure as well. Not sure what else to conclude except for a crap battery. The performance in the cold is especially terrible. I was on a film set last night with the battery fully charged. I took the camera outside for the shoot in about 2 degrees celsius. It sat on the tripod for about 15 minutes and then I turned it on. It immediately shut itself off again. This poor cold weather performance has been a theme all year. Fortunately I’ve been able to hook the camera up to a battery pack that provides constant power and this works well. Still, this battery is awful. What’s the warranty like on these?

did you try a force shutdown by pressing and hold down the power and wifi buttons until the camera reboots? roughly about 12 seconds.

I did replace the battery on my V back in March and it is still working. However, my V was completely dead, so I had nothing to lose.

I can’t recommend this as it is risky. However, something to keep in mind as a last resort if all else fails. 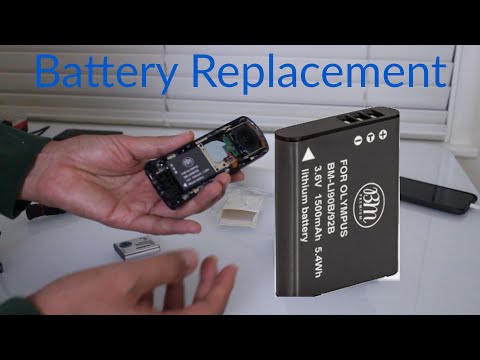 You should first try calling the official RICOH support center and check on the cost of battery replacement or related repair.

Hello,
This is my first post, and I am happy to have found this very specialized source.
I became the owner of a Z1 (second-hand) from a few days, and I was amazed by the quality of the photos, even without post-production (but I knew that relying on Ricoh means being in good hands). I have experiences with different spherical cameras, in the past I have consumed 2 theta S, and after other brands they have finally arrived at the Z1, even if it is the 19GB version. Well, …I’m curious about the battery factor of this camera. I didn’t find details on the network about the capacity and features of the internal battery. Since I noticed little performance, I ask you if you have any more information. Given the small size of the camera, I imagine that the battery does not have this great autonomy, and in a charge cycle starting from almost zero I measured about 900mAh, it’s the right capacity?
I didn’t even find a video on the disassembly of the camera, it seems that whoever has if he keeps her well …
Thanks in advance and I wish you a happy new year
Franco from Italy

I have not taken the Z1 apart. Perhaps someone on the forum has more information and they will be able to answer your question.

The V has a battery in it that has a 1360mAh rating. I imagine that the Z1 has a larger battery.

I replaced with V battery with a 1500mAh LI90B/92B and it is still working after almost a year.

I do not recommend taking apart the Z1 unless it is completely dead and you have no other option.

You can attach an external battery to your tripod and power the Z1 for the duration of your shoot.

I attach the weights at the mid point 1/4" mount point because the rubber at the end of the feet gets in the way of screwing the weights all the way in. Then I use some strong Velcro to mount the battery. Works really well and looks very professional. [Attach72881_20210710_135131]

The Z1 has both sleep and power off modes. Before the shoot, power it off. During the shoot, put it to sleep when possible and charge it from a portable battery pack and USB C cable when you are not shooting.

Thank you Craig, I will try to find out more. Obviously being under warranty I will avoid getting my hands on it, for now… thanks again

I asked a guy on Facebook that offered to replace a battery on a Z1 for free and had no takers. He’s never done it before on a Z1, but has experience with a V. 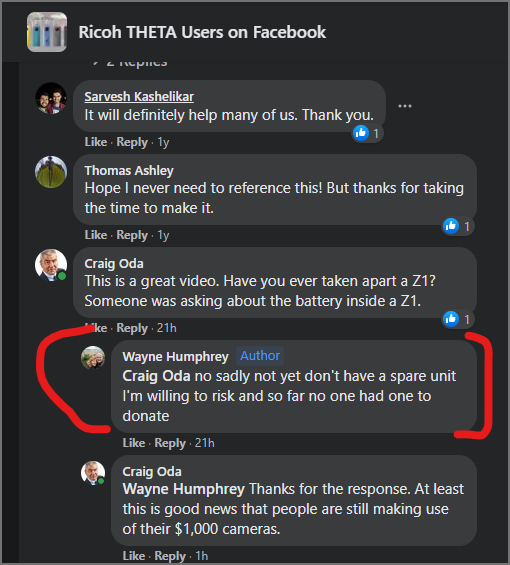 Here’s his video on the V.

If you find any pictures or videos on the inside battery of of the Z1, please post. Unless the lens is cracked, most people will not have tried to take it apart.

Just to reiterate to everyone, do not take the Z1 apart unless it is completely dead and you have no other option. There have been no success reports yet.

Thank you again Craig, and yes, let’s take same time to find the information we need. …But I remember that there is a version of the Z1 with transparent covers…do you remember??? 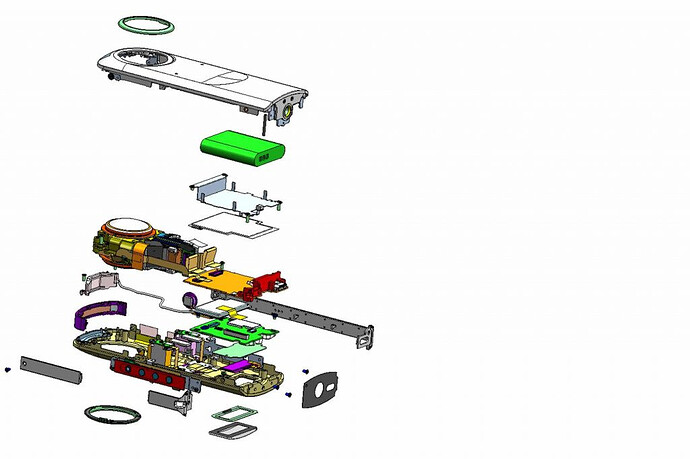 Oh great Craig, congrats on finding this information which already gives us an idea of what the shape is like, thank you very much

based on the shape, it may be the same 1360mAh battery in the V. The Z1 has side screws.

Personally, I would not try and take the camera apart unless I had no other option. I would try and use the stock internal battery for as long as possible until it stops holding a charge.

Yes Craig, that’s right, I’ll do the same thing too, being covered by a guarantee it is unthinkable to invalidate it now, thank you again

Using Developer tools, I can identify the battery capacity as 2000 mAh 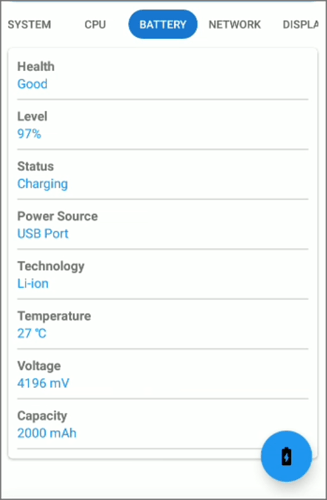 Test was run with this app running as a plug-in and using Vysor to view information.

This one done with CPU X 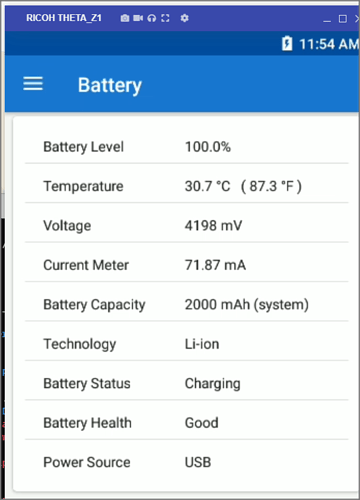 Congratulations Craig, these data are very interesting!!.
Now it is easy to know what conditions of life is the battery of Z1 !!!