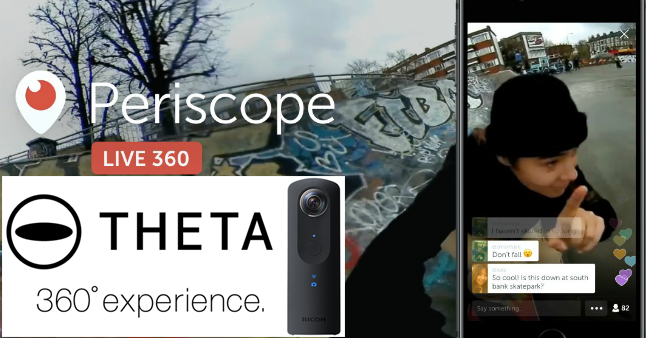 You need a Periscope account that has both Periscope Producer and Periscope360 enabled. Both are free, but on a waitlist. Signup now. 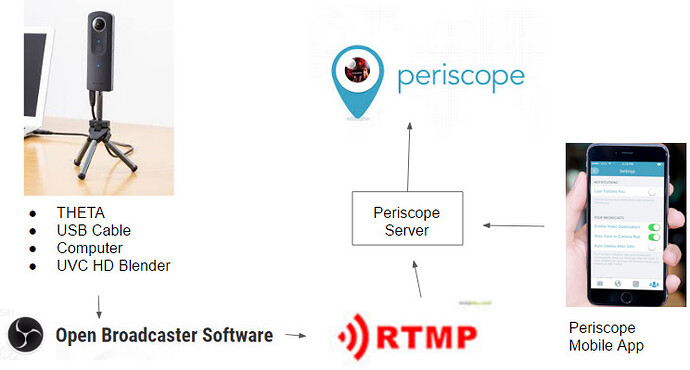 For more information on live streaming with the THETA, read the 360 Live Streaming Guide. The guide covers installation of the RICOH software and OBS.

Periscope test was done with Android. iOS should work the same. 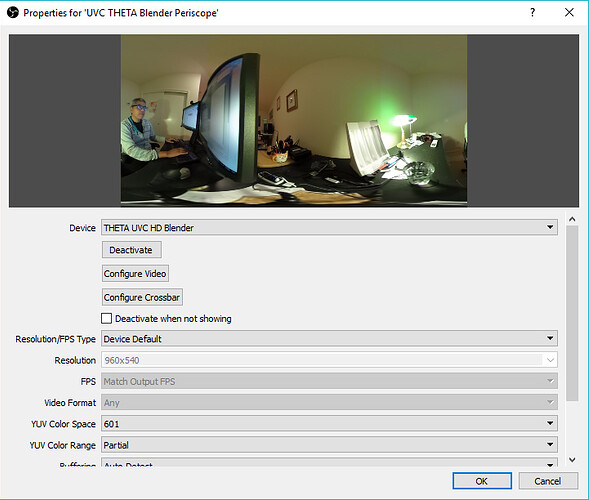 In the Output section, set Streaming Bitrate to 1500 to 2000. If you have good upstream bandwidth about 2Mbps, set it to 2000… The Keyframe Interval needs to be set to 2. 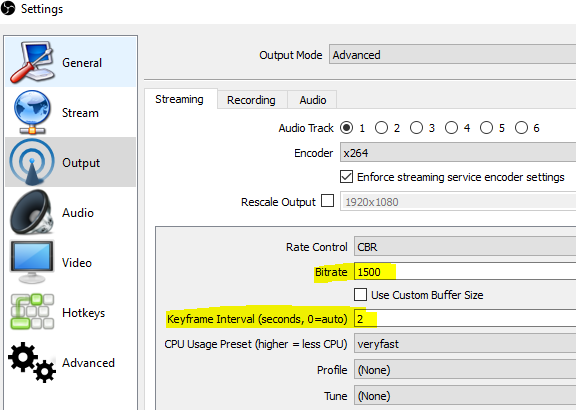 Under Output → Audio, set Audio Bitrate to 96. It’s AAC or AAC-LC if you need this info.

Get Stream Information from Periscope App

Input URL and Stream key from the Periscope mobile app.

Click on your profile info in the upper right corner. 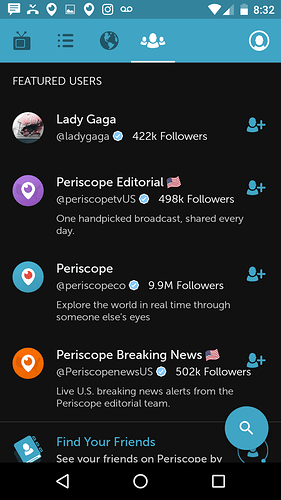 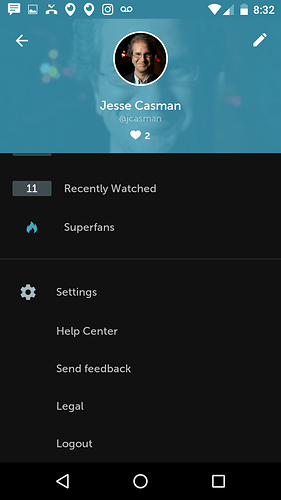 Scroll down to Advanced Sources. Press the button. 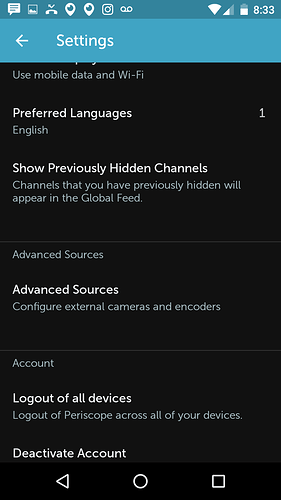 IMPORTANT: You will only see Advanced Sources if your Periscope account is enabled as a Periscope Producer account.

IMPORTANT: You should see Create External Encoder [360]. If you do not see the 360 portion, you do not have Periscope360 enabled on your account. 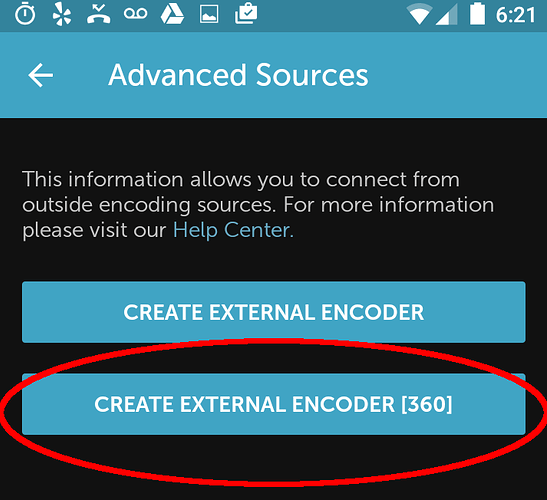 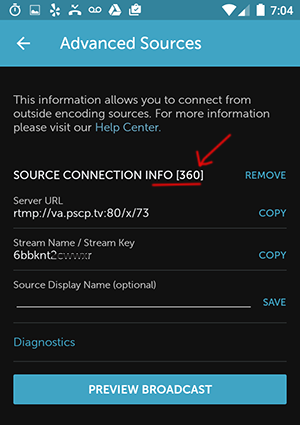 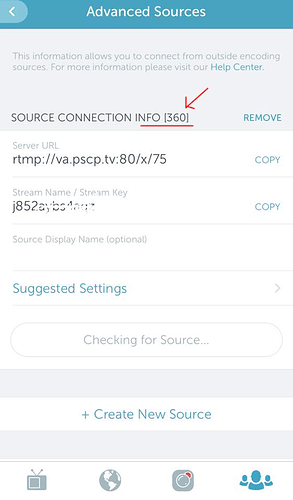 You should see a 360 video that you can navigate with touch and swipe. 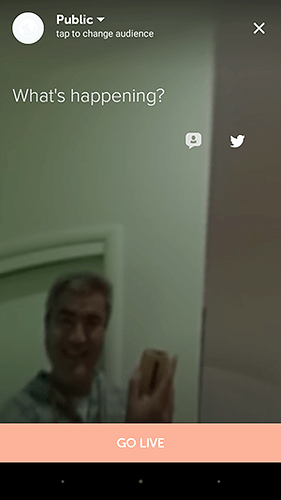 I heard from Bob Hildeman, the CEO of Streambox, that his team tested the THETA S streaming 360 video to an Avenir Micro with embedded modem module with four modems and then used their Cloud Stitching platform to stitch the dual-fisheye stream into equirectangular for broadcast on Periscope360.

The AVENIRMicro bonds all 4 modems to achieve an effective streaming bitrate from the THETA mobile feed of up to 12mbps. In their experience, 5mbps is normally enough for the THETA camera feed.

Below are two official Periscope Help Center links related to this guide. I’ve found the information to be incomplete but am including them here for reference.

Just announced: Periscope Producer API. If anyone is testing this, I’d love to get more information.

It lists the following examples:

The settings above are likely out of date. I suggest the settings from ellabondella.

I am able to stream via Periscope Producer using OBS and through trial and error (many trials and still trying) the best settings I have found are:

I also discovered a significant increase in clarity and less lag for my periscope, I simply changed servers because logic tells me there could be a lot of traffic in my region; so I am scoping on Ireland’s server with the optimal resolution I have scoped thus far.

Given that this works with OBS it seems logical this would work with any other platforms using OBS to broadcast yes? Its simply a video source so id imagine it might work…though some user being able to move visual may be something else that would need to be supported id imagine.

This is my first look into 360 cameras and I’m wondering how it would work in terms of user visuals. Lets say for example im streaming to a platform and someone wants to see whats behind me and they move the camera’s viewing angle…will others simultaneously be able to see visuals unique to their experience, will everyone view whoever moves it or will that be up to the streamer/administrator to adjust accordingly?

Each person viewing the live stream can see a different view.

The “viewer” angle changes, not the camera. The camera is in a tripod and does not need to move. If you move the tripod, the viewer can still rotate their head or use a mouse to change the view.

I recently found a video on YouTube of Michael Wohl giving a presentation at Los Angeles Creative Pro User Group about the 360° video production process. This talk emphasizes key changes that traditional filmmakers have to make in their approach to succeed with this new medium. As an amateur in both 360° and traditional film, I still found many of of his considerations helpful, as they opened up to me a whole world of thinking about this medium, helping me approach it more intelligently and meth…

Wow thanks for the quick reply! Been trying to find someone who has used one of these on twitch but have not found anyone who has. I see that a lot of these are very expensive so was looking in the $100-200 range. Since there’s no mention of using on twitch I’m not sure if it would even work

The streaming standard is called RTMP.

I do not know of anyone using a THETA with Twitch. It should work, but best to find someone using it in your target use case before you buy.

If you’re using Twitch primarily, suggest you rent a camera first or buy a camera with a solid return policy in case it doesn’t work. You can look on eBay for a used camera. Just remember that the 2K resolution is NOT the full viewable area. The viewer will only see a portion of the 2K screen and thus it will look like SD. Go onto YouTube and look for 360 videos of different resolutions.