EDITED (June 8) - For plug-in developers: Do not upgrade to 2.21.1. I was able to test firmware 2.21.1 with the dual fish-eye plug-in. It made the plug-in crash consistently. I strongly recommend AGAINST upgrading to 2.21.1 if you are currently developing a plug-in with a previous version of the firmware. We will let you know when 2.30.x is available.

RICOH had complaints around HDR with their most recent firmware release. Firmware version 2.21.1 is aimed at fixing those issues. This may be a good upgrade for end users of the camera.

I have just updated a THETA V from firmware version 1.00.2 (yea, the camera was quite a bit behind in updating the firmware) through the THETA mobile app (iOS). It took about 12 minutes to download the 672MB file to my smartphone, and then took another 5 minutes to move it from the phone to the THETA. The final step, the firmware update itself, took about 1 minute. 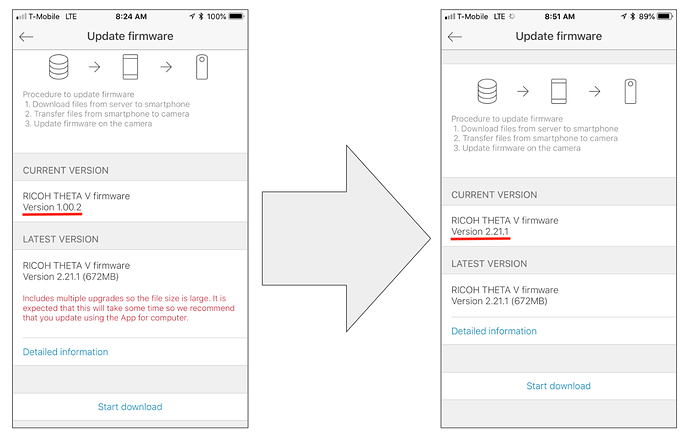 It’s several steps total and you need to reconnect to the camera wifi to confirm the update was installed but doing it through the mobile app is easy.

Notes from RICOH on specific upgrades in Firmware version 2.21.1

Do you know if firmware 2.21.1 supports the new plug-in API on unlocked THETA V cameras?

After you upgraded the camera to 2.21.1, can you still build and use the apks from the tutorials in this guide:

I’m currently running firmware 2.20.1 and want to know if I should upgrade to 2.21.1 on my development camera that I’m using to build plug-ins. 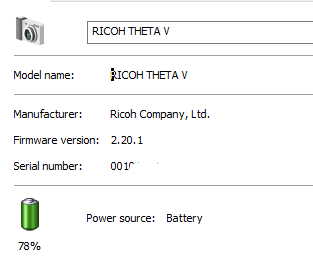 Confirmed also that using Vysor’s keyboard - to configure wifi for a plug-in, for example - with firmware 2.21.1 does not work.

Did you see that the developer firmware 2.30.1 is available to developers in the closed beta program? I’m downloading it now and will test it. Remember that there is no way to downgrade the firmware. I’ll test it first.

For your previous test with 2.21.1 (which is no longer needed), did you kill the camera process before trying to use the keyboard?

I remember that the Plug-in API changed at some point. The section below is from the Ricoh documentation. This seems to indicate that the resources need to be released with ACTION_MAIN_CAMERA_CLOSE. Did you try the keyboard with no plug-in installed and with the Ricoh camera app process stopped manually?

When using “com.theta360.plugin.ACTION_MAIN_CAMERA_CLOSE” with Broadcast Intent, the fact that the plug-in is controlling camera resources will be reported to the camera, and the Camera APIwill be able to be used.

When using “com.theta360.plugin.ACTION_MAIN_CAMERA_OPEN” with Broadcast Intent, the fact that the plug-in has released camera resources will be reported to the camera, and the Camera APIwill not be able to be used.

A post was split to a new topic: Plug-in Development: Tests After Upgrade to 2.30.1 firmware on THETA V