Plugin for auto bracketing in hdr

One more topic - and this time a question for plugin developers

I miss a function or plugin which does bracketing in just a push.
Shouldn´t it be not to much difficult to develop a plugin which shoot three or five -3 +3 brackets automaticly? (in manual mode & hdr)

i should have open my eyes …
Maybe this is the good tool: Bracket Quick Shot

it is only for the theta v …

Hi, I’m trying to figure out if the mobile app from RICOH has this feature. It does, right?

The auto bracket option is in the API. We can build a small plug-in that sets and unsets this one option if there is a need.

Another guy @Nikolai_Michaleski just had a similar question about auto-bracketing. I don’t know the mobile app that well and I’m assuming that this feature is inside of the mobile app, right?

If the feature exists in the mobile, but you want to avoid using the mobile app for convenience, then it is an easy plug-into create. We can maybe find someone to build it. If it’s a plug-in, how do you want to trigger the picture? Is a delay okay? Or, do you need it triggered by a mobile phone (which is possible, but requires someone to build a web gui for the plugin)?

I’m looking for a way to have the V do auto bracketing. I found an app for the S that does exactly this called “THETA S Bracket for HDR” but so far haven’t found anything for the V. Anyone have any insight on this? And no, the S app doesn’t work with the V. This will be for use on set where time is money. I want to be able to throw up the tripod/V in the middle of the set and have the camera shoot a bracket of X shots with the middle one being roughly a natural exposure. As it stands now i have …

Hi, in the mobile app there is a feature (i dont know how exactly in english) inside capture method /
exposure series.
With this feature it is possible to capture a serie of different pictures with adjustable settings (just as you like).
Possible to use but it is very uncomfortable and there is no possibility of auto white-balance.

The DualFisheye Plugin is now available for the Z1 too 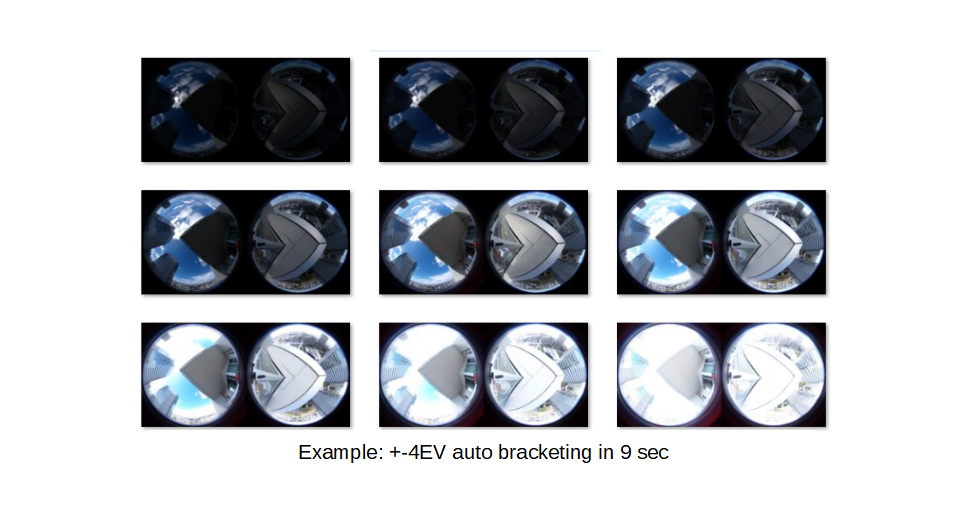