Hi,
I’m working on an app that can take automated brackets for hdr but I’m currently blocked because when calling “camera.startCapture” it never end.
right now, I do setOptions with

that is working, then I’m calling startCapture with _mode:‘bracket’
then when following the capture status, I receive something like that

So basically it take all the pictures of my brackets, the progression is working too, but then it just go back to completion 0 and I never receive state done, it just stay “inProgress” forever.
I’m I missing an option or doing it wrong? I don’t really understand.
My SC2 is on the latest firmware (1.31)
Thanks!

Using /osc/command/status with the id received on startCapture didn’t work, state is always inProgess but I found a way to bypass that looking at /osc/state and waiting for _captureStatus to go back to “idle”. Then using camera.listFiles to get the list of images captured by my brackets.
Is there a better way to use the auto bracket feature?

I ran a test with autoBracket and it works the same as your code with my setup, SC2, firmware 1.31.

Using /osc/command/status with the id received on startCapture didn’t work, state is always inProgess but I found a way to bypass that looking at /osc/state and waiting for _captureStatus to go back to “idle”. Then using camera.listFiles to get the list of images captured by my brackets.
Is there a better way to use the auto bracket feature?

Can you provide more information on if this is a problem in your application? You seem to have the correct process.

I’m assuming you have a loop that is checking state, similar to the example below for takePicture.

If there is no problem with your solution, I’m going to add it to the SC2 community documentation below and provide the example for startCapture

The SC2 appears to take quite a bit longer to be ready for the next picture shoot. The V/Z1 is faster in my experience. When you write your own program you should check _captureStatus with state to make sure the _captureStatus is idle.

The flow of your program will be as follows:

I just realized that the public API documentation has an example on /osc/commands/status that does not appear to work with the SC2. I confirmed your test with my own test. I put the picture below in the community documentation and provided attribution to you. That’s a nice find that you made. I can only imagine the frustration that other people have having. 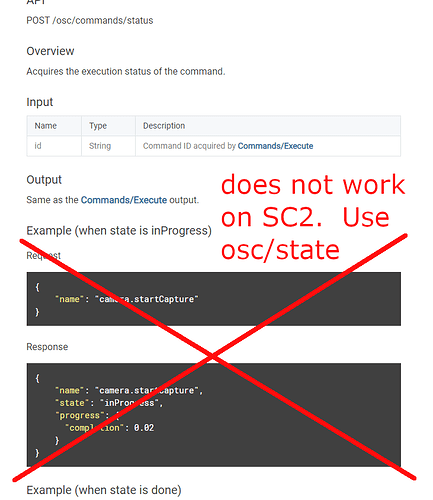 Since I can use /osc/state to get the capture status I guess that is a solution.
camera.takePicture is working perfectly with /osc/command/status the issue was only with camera.startCapture.

Thanks for all your testing and help you’re providing to other people. I’m going to do some tests based on your information and update the community document that I’m helping to maintain.

I’ll test the shutterspeed as well.

Have a nice day.

Thanks for all your support regarding theta api versioning and integrations examples.

I have been testing inProgress couple of days, my case as following:

And keep checking status of camera, the result returns inProgress but always completion is 0, then after a while it returns done and everything working perfect.

So I was trying to implement fake progress while camera is processing, the thing is I have tested it many times, but the processing time between 5 seconds up to 15 seconds ( default option/settings is used ) using SC2.

I will share the example project soon on Github for better vision on what is happening.

Are you using POST /osc/commands/status to get the state of the camera?

Example to check on camera status.

Example of take picture and then display on mobile app when it is ready.

If you use startCapture, you must use /osc/state. From my tests, you can use /osc/status with takePicture on the SC2. 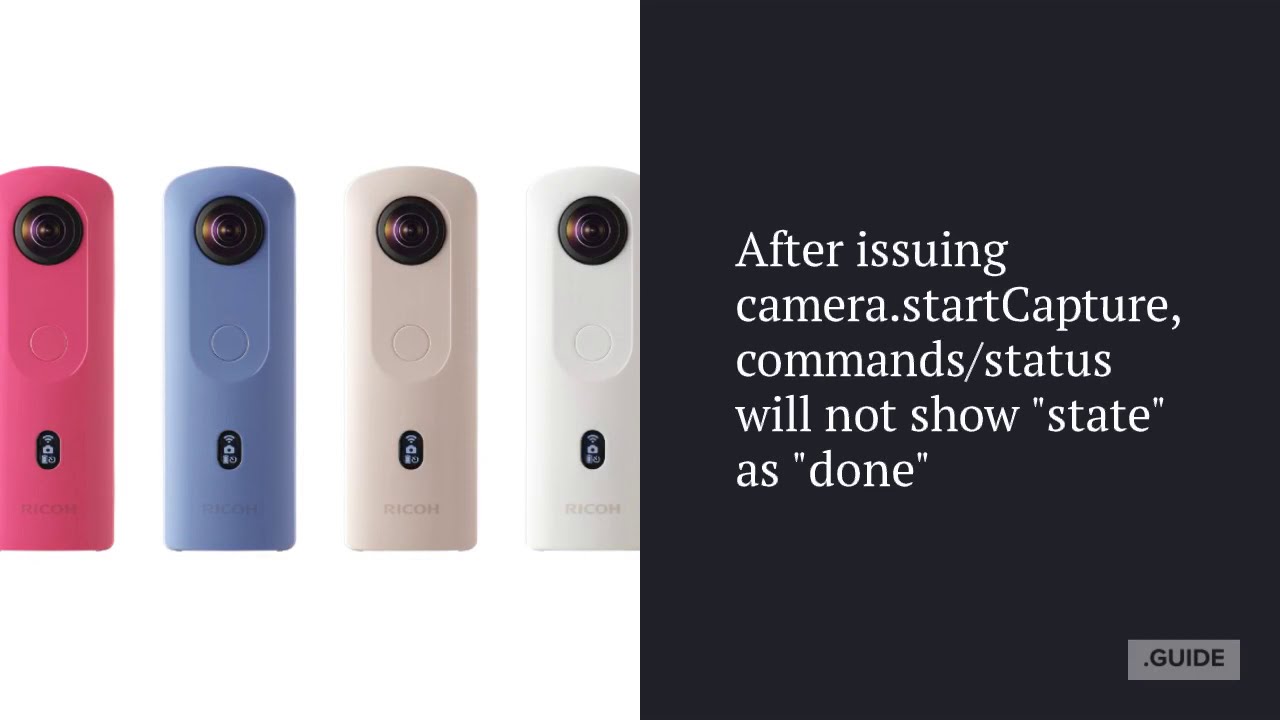 Please post more information on your problem. @jcasman and I will try and solve it.

Also, if you want to use the same API testing tool, send @jcasman an email and he can send you a link to the current binaries we’re using on Windows, Mac, Linux.

if you want to use the same API testing tool

@msabah Sounds like you’re making good progress! I did some testing recently on which process is quicker: Using takePicture or autoBracket. Results are here:

If you would like to install the useful command line tool for THETA API developed by Oppkey used in articles like Using BASH Scripts To Easily Test THETAs and Saving HDR _filter Setting to mySetting, please go to: SC2 Developers - Community Docs, Code Samples and Tutorial Videos The registration and the command line tool are free. Binaries are available for Linux, Windows, Mac and Raspberry Pi. Or you can compile the code yourself! I tested taking a series of 7 images in a row on a THETA Z1.…

It’s easy for you to test it yourself. Drop me a note if you’d like access to the binaries. What’s your development environment?

@jcasman you can also replicate the same test I did on the Z1 with the SC2.

It’s theoretically problem that the SC2 is responding differently. change the anme to theta_endurance_test.sh and change the comments at the top if the SC2 is successful

The above 500 picture endurance test using /osc/status failed for me with the SC2. The camera locks up.

@jcasman, can you run the script above on the SC2 and help me test it? I tried to increase the delay to 2 seconds and the camera still locks up.

I’m going to try a longer delay first and then if the camera still locks up, I am going to use osc/state.

The SC2 camera only locks up when many shots are taken in rapid sequence.

This is the test. I ran it on a Raspberry Pi. You may have better results from WSL2 or a mobile phone. Keep trying different scenarios. 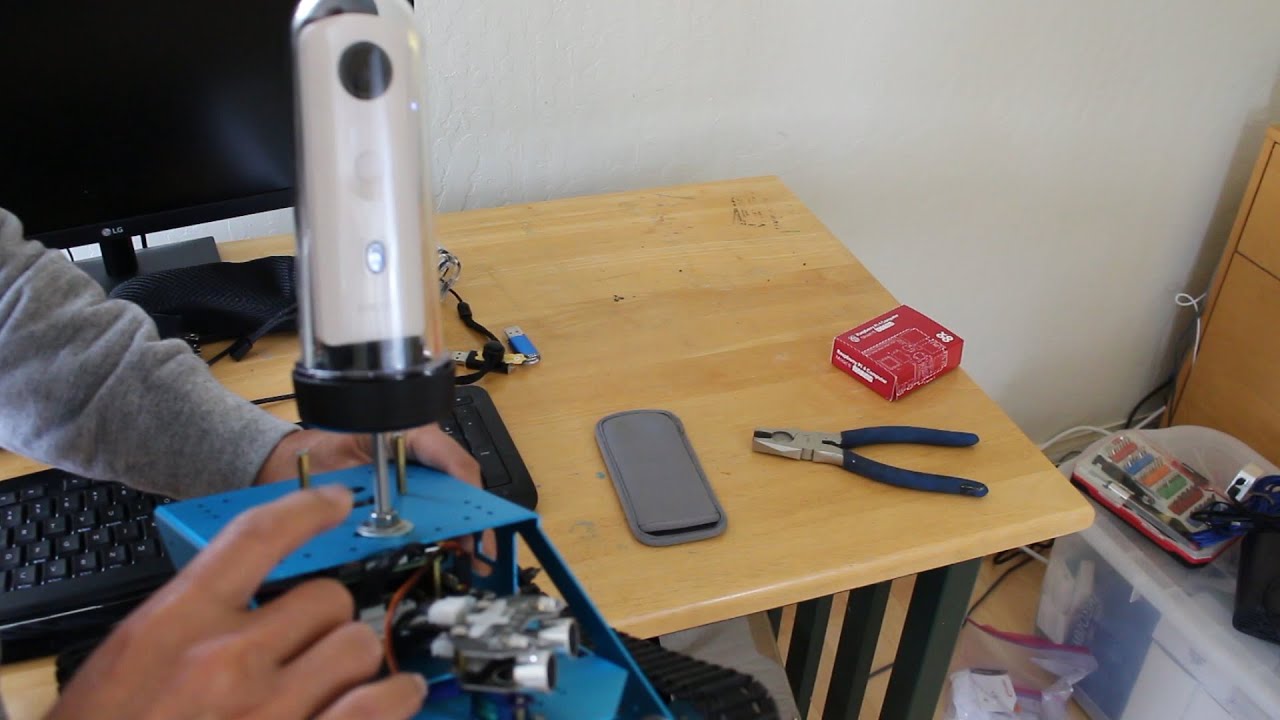 I just tried another test with the robot on the SC2 and had to replace the camera with a THETA V. I was not able to establish a stable Wi-Fi connection for hundreds of sequential shots between the SC2 and the RPi4. This may be due to the Wi-Fi chipset and use of 2.4GHz. There may be Wi-Fi interface in my office. I’m not sure. I think we can get the SC2 to work reliably for long-term sequential use, but at the moment, it is showing unexpected behavior under stress tests. We should document the test equipment and script when the test is done.

I’m building out my test results at the link below.

With a non-HDR filter, the picture consistently takes 8 seconds to be ready for the next picture.

Thus, you can create a fake progress bar by using the elapsed time.

If I don’t insert a delay between shots, I can’t accurately check the inProgress as the camera locks up.

Test with 5 second delay after done is received

I’m redoing the test again with a 5 second delay, 200 shots. This is a delay of 5 seconds after I receive the status as done. This means that I am waiting a total of 13 seconds between shots, not including the download time. In this test, I am not downloading the image after each shot.

Test with 8 second delay after done is received

Redoing test with 8 second delay. This is 8 second after I receive the done status. Time between shots is at least 16 seconds.

the processing time between 5 seconds up to 15 seconds ( default option/settings is used ) using SC2.

@msabah It sounds like you are making good progress!

@codetricity and I are doing some more testing here. Can you confirm you are:

We don’t know, but we think if pictures are taken in succession, there may be a problem.

Even if it says “done,” if you take another picture immediately, there might be a problem.

Try inserting a 3 second delay in between shots. We’re not 100% sure. But this is what we are currently testing. Just giving you this update right now.