Information translated from the original Japanese by the Unofficial Guide. Original article by Katsunori Takamatsu (“Wackys”), posted in 360 Worlds on April 21, 2017. 360 Worlds tagline is “Covering topics on 360 panaromas focused around the RICOH THETA.”

Information on the new product we’ve all been waiting for!

A new model from the original 360° camera “RICOH THETA” series compatible with 4K movie shooting will be exhibited for the first time at the NAB show. (NAB Show 2017 Apr 22-27, Las Vegas) 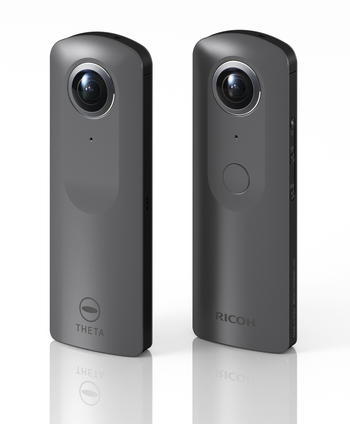 It’s easy to get excited about the 4K video functionality, but there are other new functions that are supposed to be extremely cool!

The current flagship model “THETA S” was released in 2015. I am using it as my main 360° camera regularly for good operability and high stitch accuracy. (I own two.) However, he 1920 x 960 (2K) for video resolution is not enough at all, to be honest. So I basically don’t ever use it for video. And nowadays there are more and more models out there with 4K video.

Are we getting 4K? That was in 2016. And was was announced was the "THETA SC.” Honestly, a lot of people were disappointed. (I was one of those people.) I felt maybe that that shape (design) and doing 4K video was probably quite difficult. But in the pictures for this new announcement, the shape is nearly the same! I used various 360° cameras, but ultimately this shape is the easiest to use!

The actual resolution has not been announced, but 4K = 3840 x 1920 probably. In that case it will be 4x in pixels. The frame rate is 30 fps. I think it will depend on the exact specs but this should be enough.

Although there are many 360 degree VR images around the world, the sound associated with the 360 media is mostly stereo. This limits the VR experience. For a VR experience to be immersive, the sound needs to move with the movement of the field of view. This is impossible with 2 channel stereo recording.

Ambisonic (*) format is currently the main way to handle 360 ° video spatial sounds. This is used by places such as YouTube. To get this effect, it was necessary to prepare a separate microphone for recording spatial sounds.

However, the new THETA has built-in 4 channel microphone. With the new feature, it is possible to record spatial sounds linked to 360 ° motion picture.

Using the THETA alone, you can now take VR images with even more immersion.

See this example added by community.

I was surprised that the camera internal OS appears to be based on the Android OS.

With this as a base, it appears that specialized applications and functions can be installed!

This is something that other companies will be hard pressed to imitate.

What’s the Purpose of Extensions?
Until now, in cooperation with the smartphone application, various shooting functions were possible. Will it be possible to expand the functionality of the THETA itself?

This developer opportunity is unique to Ricoh who provided API and SDK for developers. THETA’s superiority will become increasingly important. 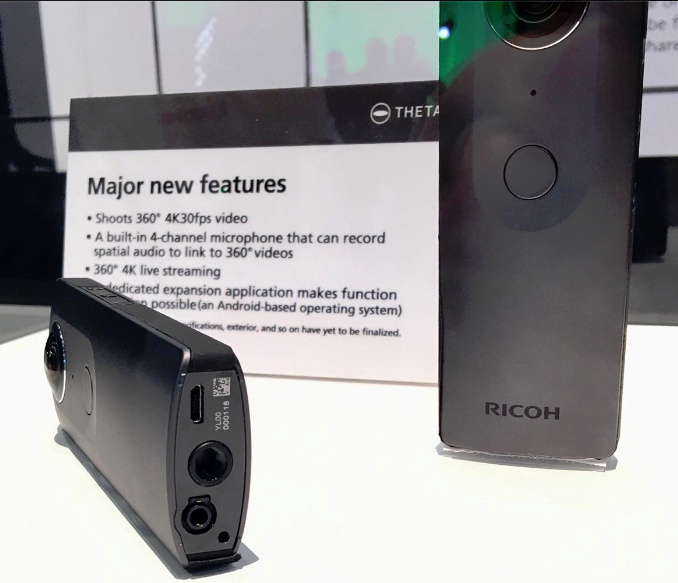 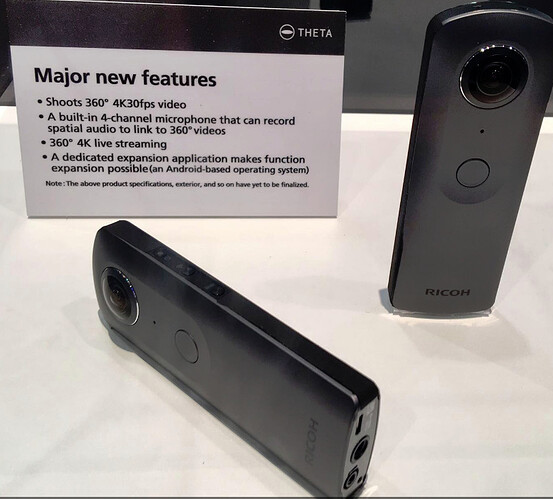 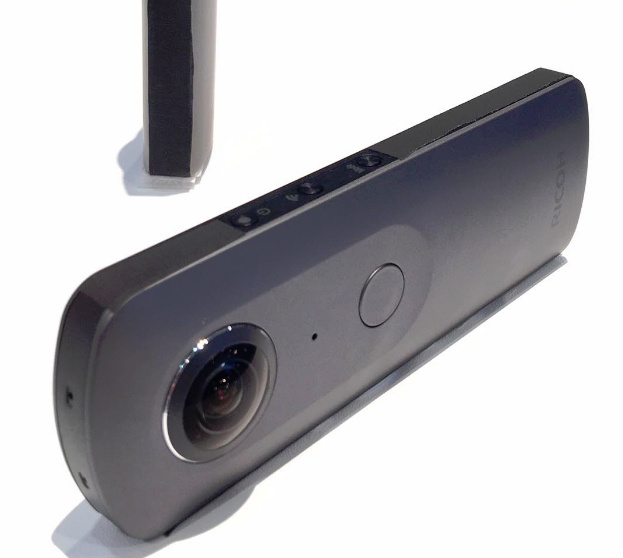 The picture showing the bottom is totally fascinating! The audio jack would be a major advantage. It looks like it has the USB port, but I don’t see the HDMI out.

Good one, thanks for the link. I can see the AdoramaTV interviewer was interested in the Android-based OS app expansion functionality, like me. I’d like more details, PLEASE!!

Here is another interview at NAB.

@jcasman Did you ever meet this guy, Kazunobu Saiki-san?

It looks like they have a demo of the spatial audio. Is our contact at Ricoh going to show that demo at the meetup in San Francisco?

I met Saiki-san about a year and a half ago in Tokyo. He’s a marketing manager for RICOH THETA (sorry, don’t know his exact title) and seems like a good guy with lots of knowledge and enthusiasm. I haven’t heard back from TK (product manager, speaking at the RICOH THETA meetup next week) whether he’s including the statial audio demo or not. I certainly hope so. I’ve made sure we have a good AV setup for sound, just in case.

That interview indicates that you need a PC to do live streaming. However, as we saw with the Ricoh R Dev Kit, the company has the technology to stitch live streaming video internal to the camera. For the RICOH THETA S, the features came out over time. If you recall, at time of launch, there was no UVC Blender. This was added later with firmware and software upgrades.

We’ll probably need to evaluate both the feature set at launch and also what the camera is capable of with future firmware and software upgrades. The tantalizing information about the internal Android OS really opens up the possibility to do many things with the camera in the future.

Wonder is it Audio out and Microfon in ?
Running Android 6.0.1Marshmallow you can even use the USB to connect external storage.

Android "Marshmallow" (codenamed Android M during development) is the sixth major version of the Android operating system and the 13th version of Android. First released as a beta build on May 28, 2015, it was officially released on October 5, 2015, with the Nexus devices being the first to receive the update. Marshmallow primarily focuses on improving the overall user experience of its predecessor, Lollipop. It introduced a new permissions architecture, new APIs for contextual assistants (fir...

Edit: But will it be Mac friendly running Android ?

I have no special knowledge and am only speculating. I think it is a microphone in jack to use higher-quality external microphones.

I think the camera will work with both Mac and Windows, same as now. I believe the function of the Android OS is to help with image processing inside of the camera, possibly related to stitching or other image processing. Once the image or stream is processed, it should interface with Mac/Windows the same.

I am just speculating.

All right test with @jcasman mac and connect Your Android Phone to his iMac
IF it functions with a THETA running 6.0.1Marshmallow it is good
hate to say but our experience on this are a bit troublesome

The product manager for the THETA in the US has a Mac and several engineers at RICOH working on the THETA have Macs. Once the camera is available, we’ll also test it with a Mac. Based on past history, I believe the Mac will be a tier-1 supported platform, no different from Windows and that the Mac compatibility will be tested extensively.

Sirs, would this release be the Ricoh Dev R or is it the continuation of Ricoh Theta S? Are they different products? I am very thrilled with ambisonic audio. Thank you!

Sirs, I work exclusively with Live Streaming 360. Yes, I bought the Ricoh R Dev. But I am sad to know that only another model will be 4k. The model for consumers is 4K, but for us the professional product is full HD, very strange. Sad, but I’ll have to buy the two products.

I did not receive the Ricoh R Dev. As far as I know Ricoh will send from May. Has anyone received your Ricoh Dev R?
Yes, from what I read it has internal sewing.

Am very stoked about this announcement…like others here eager to know more details.

Paul, me, too! There’s a meetup in San Francisco next week, and the product manager will be giving an overview of the announcement details. Wish you were closer! I’ll let you know if we find out anything more: