Has anyone had success using a Bluetooth microphone to Theta X? I successfully paired a Bluetooth headset to the X with no problems. I can hear audio out from the camera (eg sound notifications) in my headset, but audio in from the headset microphone was not picked up in the 360 video I recorded. Given the X has no audio input jack, adding Bluetooth mic support seems to be an obvious feature to add. The X’s QCS605 chipset supports Bluetooth 5, so should be feasible to add support if it is not already there. Is it on Ricoh’s X roadmap? +1 if you agree.

I tested with my Enacfire wireless headphones (which has a mic), rather than a dedicated bluetooth microphone. It paired with Theta X OK and camera audio out worked fine. Microphone audio in did not work, no audio was recorded by Theta X.

So not a conclusive test and Bluetooth has various profiles so could work with a dedicated mic but I’ve not seen mention of it anywhere. Hence why I am asking if anyone has tried with any success. Or if you can enquire of Ricoh the current status and any plans.

So not a conclusive test and Bluetooth has various profiles so could work with a dedicated mic but I’ve not seen mention of it anywhere. Hence why I am asking if anyone has tried with any success. Or if you can enquire of Ricoh the current status and any plans.

Other people have asked about the microphone and I have unsuccessfully tested my headset, same as you.

We can report to RICOH, but I am trying to organize information status of test to make it easier to report.

It’s possible someone in the community has a positive test report.

I have not heard of any positive test report yet.

Hi Craig, could you take this topic to Ricoh please, asking if they do (or will soon) support Bluetooth microphones. I think it is a very reasonable feature to support for such a camera. But it becomes an essential feature for streaming to avoid air noise picked up by the internal microphone when a fan is used for cooling. A fan is required to prevent Theta X thermal shutdown after 10 min use for wireless streaming.

@jcasman brought this up in the meeting last week. Our contact indicated they would ask around. I’ll add it to the agenda again for Thursday.

thank you, do let us know what Ricoh said.

We are still trying to get more information. We explained the in use case for using a Bluetooth microphone.

Is it possible to use a USB microphone instead of a Bluetooth microphone?

On my pixel 4a Android device, I can use an external USB microphone, but I am not sure how to set this with the THETA X. 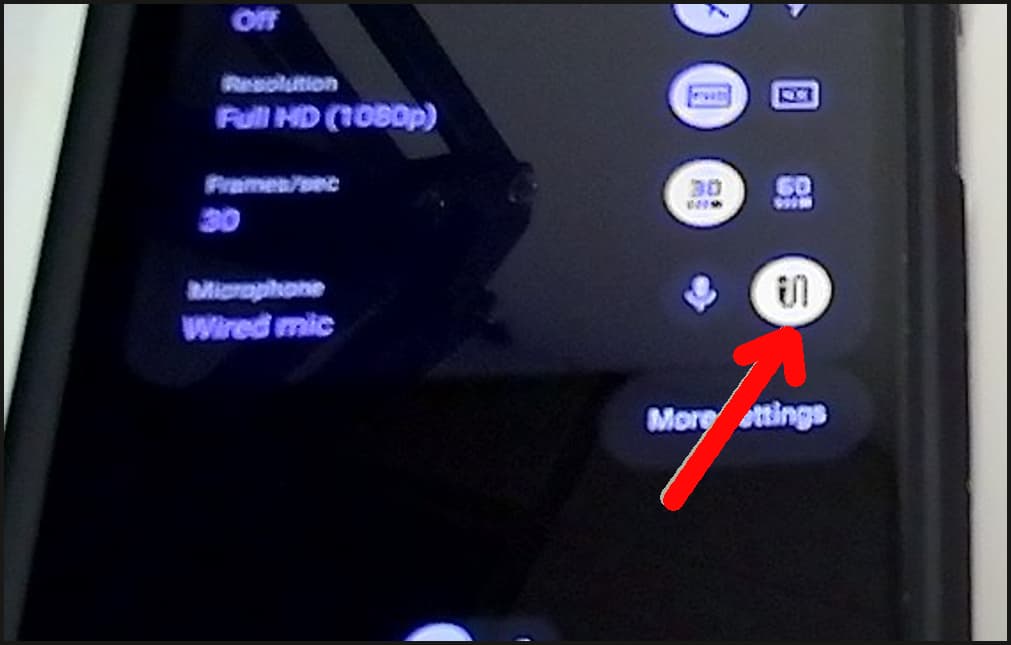 I plugged the same microphone into the THETA X, but I am not sure how to test if the audio is coming through the USB microphone or the onboard microphone.

hi, @gthomas , I’m a developer, working on an advanced, high quality wireless streaming plugin, it’s in alpha test phase for Theta Z1. I built a fan to make it stream for 3-4 hours in 32°C (~89.5°F) environment, looks like this: 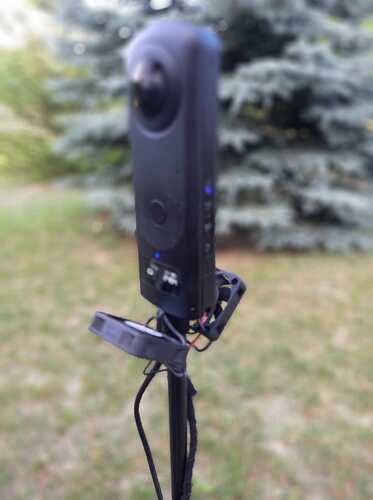 1.jpg1504×2015 123 KB
powered by same powerbank as Z1. I own an X too, tried to adjust the plugin, but for now it works on Z1 as X heating is a much bigger issue for now and also I was facing with some programming issues on X.
I’m using low noise fans and also tried to attach some furry tapes to the microphones, which helped a lot… Do you have a sample stream to share to hear the noise of your fans? btw. fans are invisisble as my plugin is able to render nadir logo too, on the fly, while live streaming. Thanks!
1 Like
craig August 3, 2022, 1:16am #11

@biviel , thanks for posting your info here. if you and @gthomas want to video chat on Google Meet, I think that @jcasman can help set it up and join the call too. We can then start to organize ideas for solutions to heating issues for the THETA X, potentially in a private conference if it is easier to share ideas that way.

utions to heating issues for the THETA X, potentially in a private conference if it is easier to share

Sounds good form my end. Although I’m still focusing on Z1 for now, but it’s only a question of time… Thanks, @craig !

Is it possible to stream 8K with the THETA X from your plug-in? I noticed that the SDK has this option. Maybe it works streaming at 8K with a lot of cooling? I set it to 8K live preview and it seems to work on the body of the camera, but I have not tried to stream it over a network. 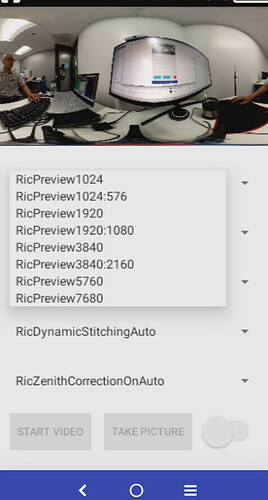 Hi! At the moment Theta X is not supported by my plugin. Preview is one thing, the question is which profile level is supported by the encoder hardware…and it’s maximum resolution. I’m able to get 8k preview at z1 too, fps is low, but it works, but I can’t encode into mp4 because of limitations of encoder hardware in Z1.

@gthomas is there a specific bluetooth wireless headset or microphone that you wish your customers to use? Can you post a target model?

No, just having Theta X support standard bluetooth audio input (like most other Android devices) is the requirement on Ricoh.

OK. Thanks for the response. I will report back.

I’m going to request for testing on generic equipment like this:

Thanks. Note the Enacfire was just what I used for personal test, which caused me to raise the original question.

Perhaps a good addition to the test device list would be a BT analogue audio adapter/transmitter. This would allow independent choice of mics. Avantree Lock or Avantree TC417. There is also the SabineTek SmartMike+ levalier mic but I have no experience of these.

a good addition to the test device list would be a BT analogue audio adapter/transmitter. This would allow independent choice of mics. Avantree Lock or Avantree TC417. There is also the SabineTek SmartMike+ levalier mic but I have no experience of these.

Thank you for your contribution. this is a good idea. I will organize your idea into a report that I will send to RICOH and link to your original post.

Perhaps a good addition to the test device list would be a BT analogue audio adapter/transmitter. This would allow independent choice of mics. Avantree Lock or Avantree TC417. There is also the SabineTek SmartMike+ levalier mic but I have no experience of these.

The Enacfire E90 is not available in Japan. It’s going to be difficult to test the different combinations of microphones with the bluetooth to 3.5mm audio adapter that you listed above. It’s a good feature, just difficult to test.

If they test a standalone BT microphone, there’s just one device that needs to connect with the THETA. For the Avantree Lock, there looks to be three devices, the transmitter, receiver, and the microphone. 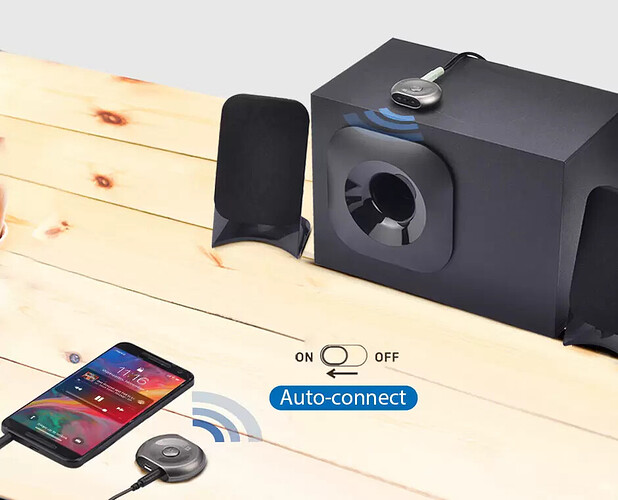 For the Avantree TC417, there are still two devices, the receiver and the microphone. In the picture below, the speakers would be replaced with a microphone and the square device would need to transmit to the THETA over bluetooth. 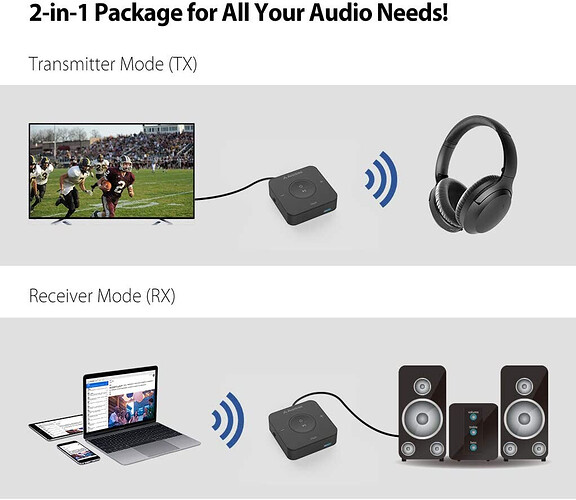 Its just an idea / example, I am sure there are plenty other BT audio transmitter devices available in Japan.