Z1 firmware 1.60.1 release on Sept 24 improves live streaming, likely due to better heat management (my informal assessment based on touching the camera).

To take advantage of this improvement, we need to connect the Z1 to either a mobile phone or computer and then upgrade the firmware. 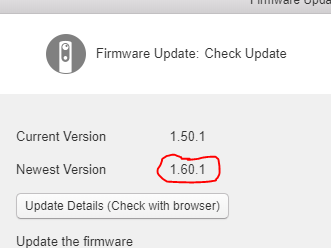 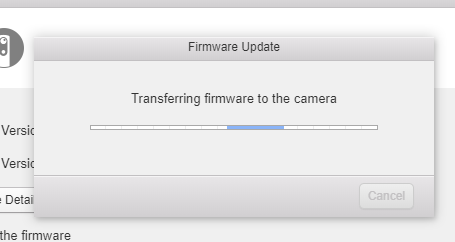 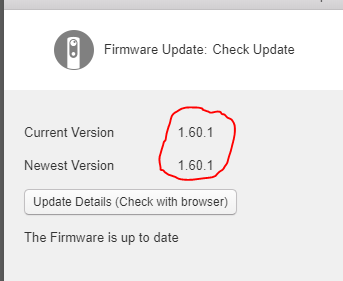 On Windows, select the RICOH THETA V/Z1 4K that I downloaded from the RICOH site. 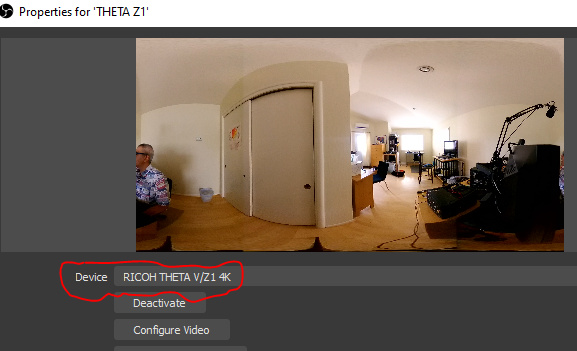 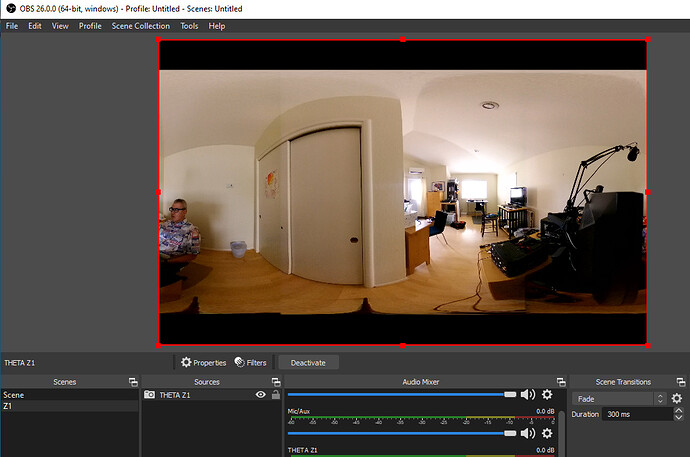 CPU utilization is quite low at 3% 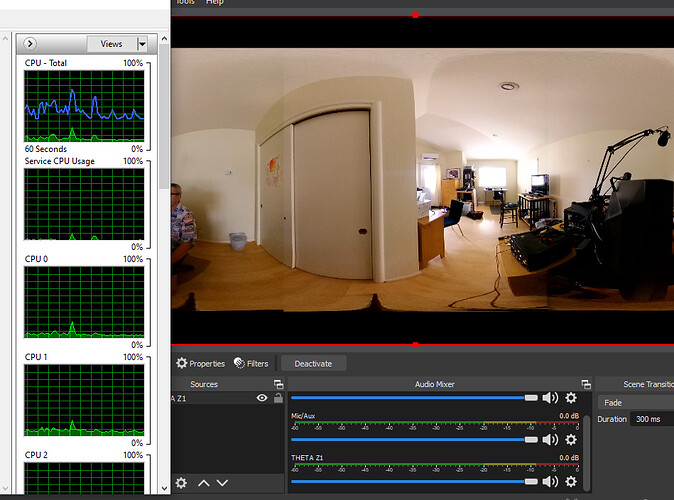 Camera feels cooler to the touch.

OBS configuration is covered in this video.
How to stream to YouTube

I don’t have an thermometer attached to the camera, but using my hand on the camera body, it feels much cooler after a few hours of streaming. This is a much more stable setup for continuous live streaming.

The battery charge appears to be dropping on my USB 3.1 Gen 1 port. It may be the cable or the port on my ASRock X99-ITX motherboard. According to Wikipedia, the USB 3.0 specification only requires 900mA. There is a separate USB Battery Charging specification. However, I don’t have the specifications on my motherboard’s power output from the USB 3.1 ports. A newer mainboard chipset would likely yield better results.

Current draw is 0.41A, which may not be sufficient to keep the camera fully charged indefinitely. 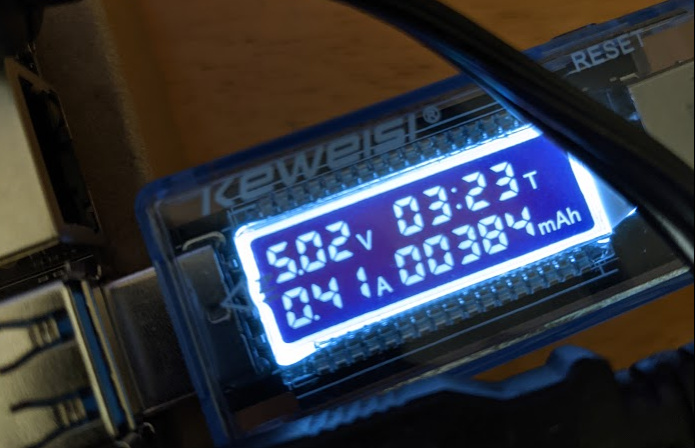 This is different from my previous test on Windows 10 where the battery charge was increasing.

I’m using a different computer in this test. In the previous test, I did not use an inline current tester.

Test #2 On NVIDIA Jetson Nano Using USB 3.0 Ports and 5A Power to Nano at 2K Resolution

The battery looks more stable on the Nano using a 4A barrel connector to supply power to the Nano. 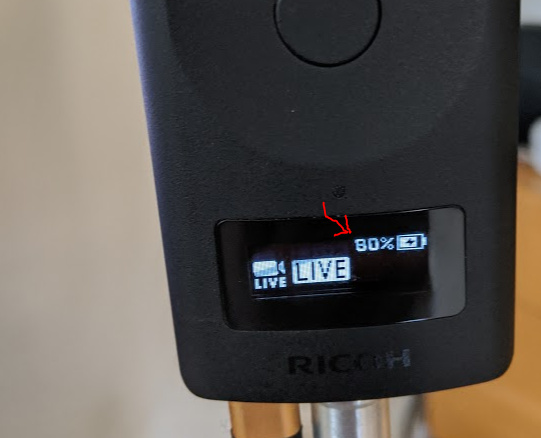 I reset the timer on the inline USB current tester. This shows that the THETA has been streaming for 8 minutes in the new test. It is consuming 5.03V at 0.41Amps. 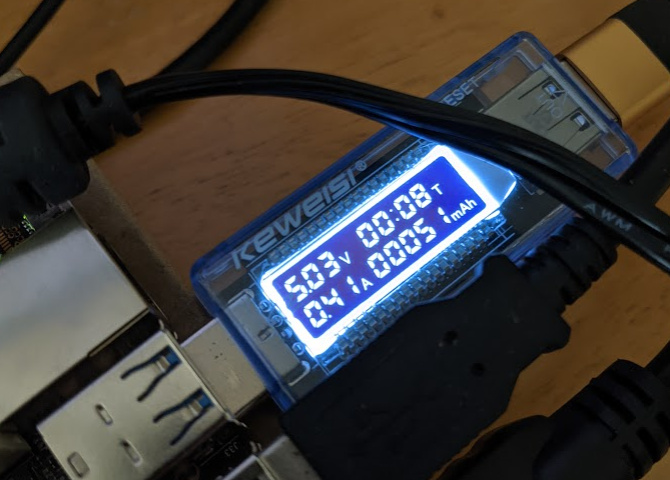 This is the setup for the test. 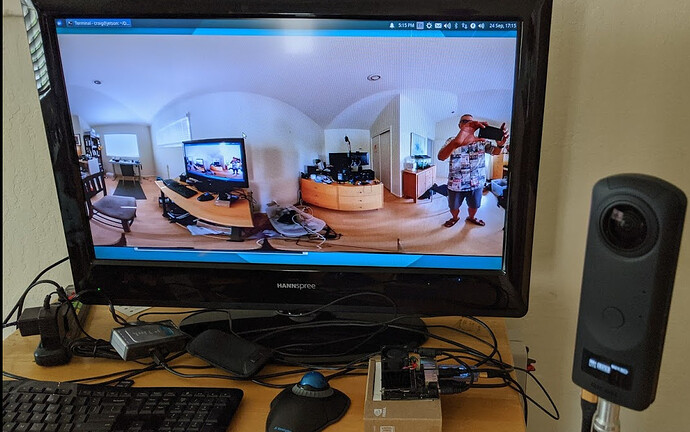 I increased the resolution to 4K and reset the timer on my inline current tester. Initial results show the battery is slowly losing power when streaming at 4K with the new firmware.

Used 1m USB-C cable and results remain the same. I can stream for hours, but likely not indefinitely. I’ll keep trying.

This is a great upgrade as it reduces the heat of the camera, greatly improving streaming stability for sessions of 4 hours. If I figure out a way to send more power into the camera, I can likely stream for days. However, I haven’t been able to figure this out. The heat reduction is outstanding.

I just upgraded a few hours ago to this version. I’m using my own modified Wireless streaming plugin, resolution 4k FPS about 20, and I can confirm that this upgrade rocks and not only for wired streaming but for wireless too!

I also tuned the body with heatsinks around and I was able to make it run prior this upgrade for an hour without moving camera, it turned off after aobut 60 minutes. If I was moving it, it could work even longer because air flow helps to cool heatsinks… But now during test I didn’t move to reproduce the test I did before.

Now after upgrade, I was able to run more than 2 hours wireless streaming, while charging at the same time, same settings as before… and at the end I stopped manually and it didn’t shut down as usually when overheats.

This is a great upgrade! I was testing this to see if any improvement on heat, but since last year this is the only significant improvement during upgrades.

Great to hear! Thank you for testing this and reporting back. It helps us all. Can you tell me what type of computer you have the Z1 plugged into? Is the battery charge increasing on a standard USB 3.0 port?

I looked in for a few minutes! I’m in San Francisco, USA. The feed was good resolution. I could see leaves moving, I could see the deck umbrella (closed and tied down but still it could move) flapping a little. And I could see the light change a little. (Last screenshot.) I believe the sun was starting to go down. And, I could even hear some audio, a little bit of the wind blowing. 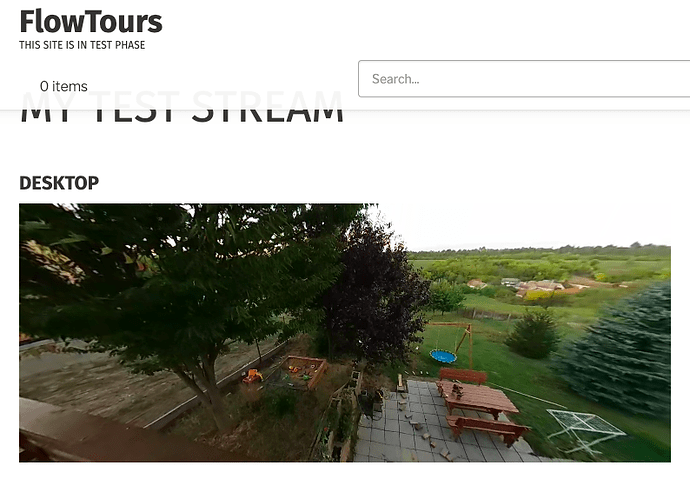 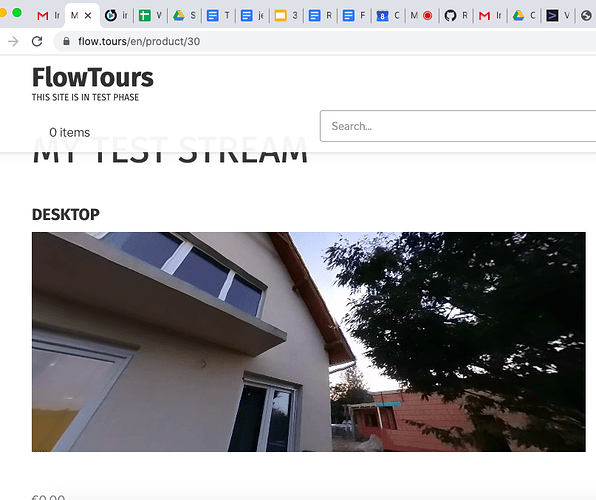 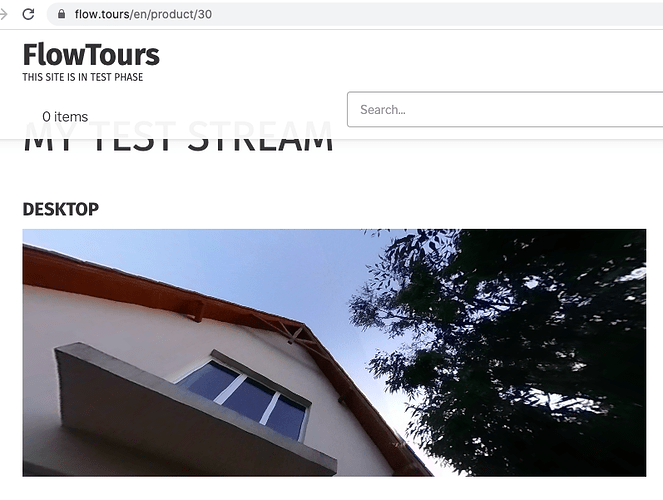 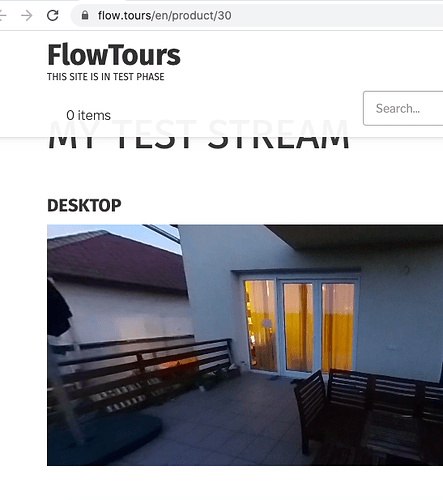 Yes, but anyway it was too dark there and at the moment our kitchen/living room may be a bit messy to stream from indoor. 2 kids… it’s like haveing 2 or 4.

I was searching for a stream sample video on youtube for USB streaming via stitching on Nano device, do you have a link may be? thanks!

Thanks a lot for watching! Did you also switched to full screen? It didn’t buffer a lot? I’m using AWS Cloudfront to distribute file chunks but viewer needs to stay close to router for sure not to drop below 14-15mb/s! Thanks a lot again! I’m trying to get out the maximum from this device and this firware upgrade also helps a bit. Not much as anyway I attached already heatsinks to my first Z1.

However I have another one, without any “upgrades” I’m planning to test how long can it run and stream wirelessly. Are you interested in some other tests too upcoming day? I’ve recorded my first test done in Budapest city, Hungary, connected to my mobile device as hotspot, sharing 4g mobile internet: https://www.flow.tours/en/event/vigado

I did not switch to full screen. Even without full screen, it did buffer for a noticeable amount of time before starting. I did not measure it, but maybe 10-20 seconds. Once the stream started, it felt reasonably smooth. When I navigated (click and drag with mouse) to look around, there was maybe 2-3 seconds latency with each change in direction.

Yes, if you do more tests, please post here, I would like to see if the upgrades make any difference.

the recorded video is quite good. The system you built is great. Nice job on the development. How are you selling this? Are you renting out the equipment, sending people down to the site, or selling access to your software?

thanks!However improvement is still in progress. I’m able to do live streaming in HDR, also around 20FPS, it looks much better, color much more detailed, clearly dynamic range. But static stiching doesn’t work well there is a bigger stitching issue when doing in HDR, which I don’t like. If I would be able to correct that would be great, however seems I may not be able to do that through camera API. I know I could do it in theory on client end, but it would take more cpu resources there.

Regarding service, in this system anyone could become a “host” for the event, to come and book a broadcasting time, pick the date time, see the schedule/calendar and see timeslots when there is a free timeslot and pay/book with credit card. In exchange would get access to that timeslot and get a dedicated media server with additional services for stream delivery. Probably there will be different types for broadcasting, depending on the number of viewers, etc. Also a host would have several options: make this event a “public commercial” event, so anyone could watch who buys a ticket, my shop is there behind and able to cover this to pay by credit card directly. another option would be to make this event public free, which means that directly anyone who clicks could watch (for broadcaster/host this would cost more of course). Also I’m planning to let host add a list of emails and those would be able only to login and watch the event.

I picked Z1 because this was the only cam I could tune programatically a bit if needed. And unfortunatelly and luckily at the same time, it was necessary to tune a bit.

Originally I was planning to provide a system , including camera to museums, other agencies, to be able to show exhibitions worldwide, to do realtime virtuals tours for money or for free up to them. I started this way before COVID, but now it may help to these organisations. My system could work with any camera, but it needs to be lightweight and with decent quality and relatively cheap. To be able to charge and stream through wifi at the same time for at least an hour or a bit more.

I’m planning to start contacting some museums probably soon, for them I may have to provide camera too, need to put heatsinks to sell or to let them rent form me, not sure. For me it would be the best if this camera would be able to stream wirelessly without my tuning work honestly. But I have to provide some more services to museums, they will not be able to use it easily, not at the beginning, etc. also in museums it may make sense to make HDR streaming work too. Let me know if you have any questions, I may missed to answer your question.

and i didn’t get to also mention 2 things. it can do fast roaming when connected to wifi. this is important. can switch automatically to another router in a wifi mesh system without disconnecting stream. 802.11r an k isn’t mentioned in specs. will do compare my 2 z1 cameras for heating during streaming next 1-2 days.

I did a fair comparison of this latest firmware 1.60.1, with 1.31.1, expeciall during wireless streaming.

First of all, there was not noticable difference, camera shut down about at the same time.

However less frames were dropped and overall streaming was better after the upgrade. I did a comparion on a usual Z1, without any heat sinks, etc.

However there is also something wrong with this ugprade, I noticed that in Android Studio I’m not able anymore to get live logs (Timber.d)… So I’m not able to get any debugging information while running a plugin via Android Studio, anyone any thougths or solution for this?

Before firmware upgrade all worked fine after it’s empty. I repeated on 2 cams the same result after upgrade and so far I couldn’t find a solution.