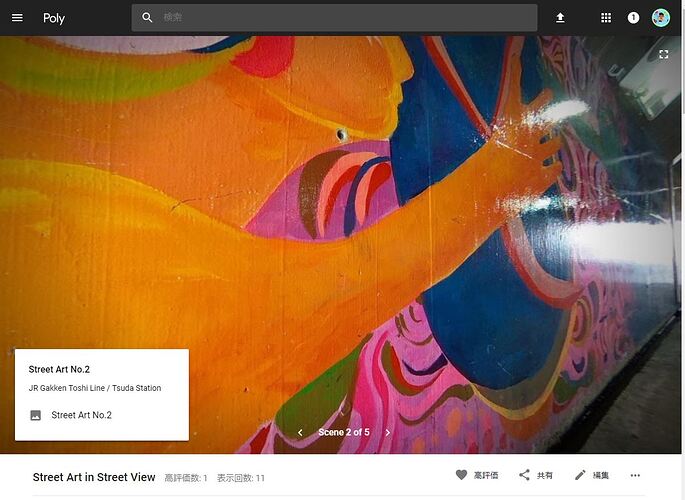 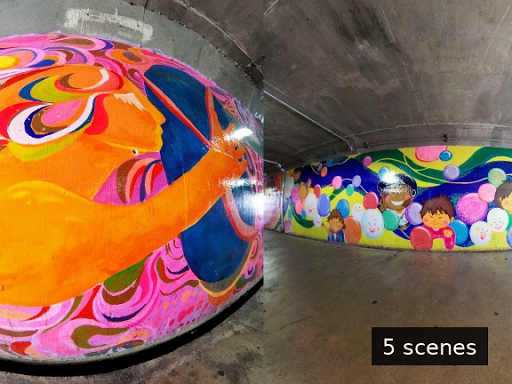 Of course, all the images were shot by RICOH THETA V. Enjoy!

This is great. Nice shots!

Is it possible to give creators the option of sharing their photo settings?

One of the great things with Flickr is that you can see the XMP data of the images. I’d like to improve my own pictures and it would be awesome to see more details on how you created that great Street Art.

Hi, thanks a lot for your commenting. I just use HDR Mode +1EV.
Tour Creator has launched today. More,more interesting features are coming soon!
Toyo

Embedding code is not allowed here?

As far as I know, Discourse does not support iframe embedding. We used to use whitelist-iframe on this site, but the plug-in stopped working with the current version of Discourse, version 2.0.0. I would like to enable iframes on this site, but I have not figured out a way to add it to Discourse 2.0.0. It would with version 1.9.

Thank you for your reply. I understood well.
All the exif data as below, from one of the THETA V images that I published to Google Maps, here.

Hi, Craig. I have another Tour Creator’s virtual tour. It is new one! 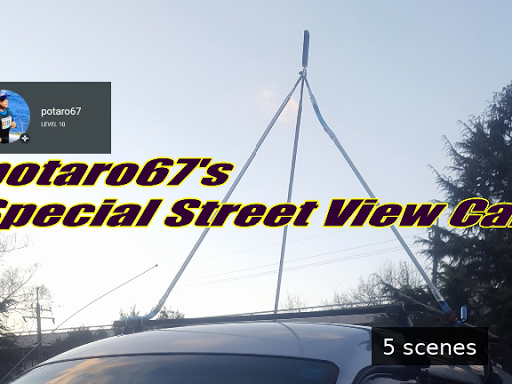 My favorite collection of potaro67s'

I moderate and publish the tour. but THETA V shooter is not myself. potaro67 did them all.
Enjoy it again

Based on @Juantonto’s tip, I took a look at the new Google Tour Creator. Wow, it’s simple to build VR tours!

From the Google announcement:

Tour Creator …enables students, teachers, and anyone with a story to tell, to make a VR tour using imagery from Google Street View or their own 360 photos. The tool is designed to let you produce professional-level VR content without a steep learning curve.

RICOH THETA seems to be pretty closely aligned with the announcement, judging from this link:

I jumped in and tried it myself. I went here: 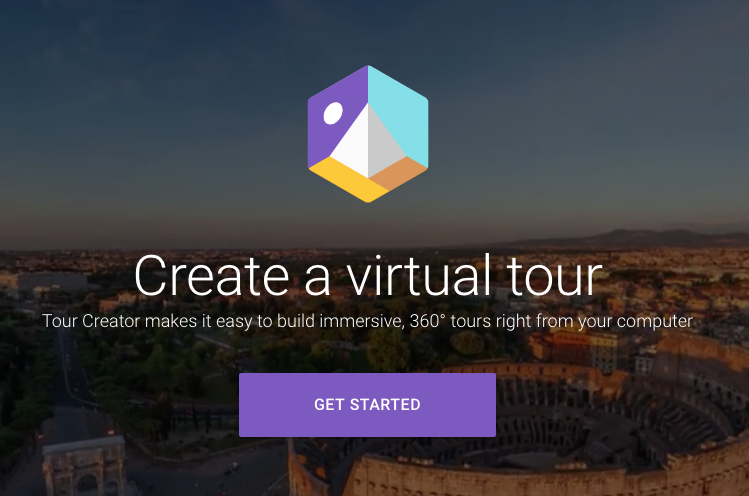 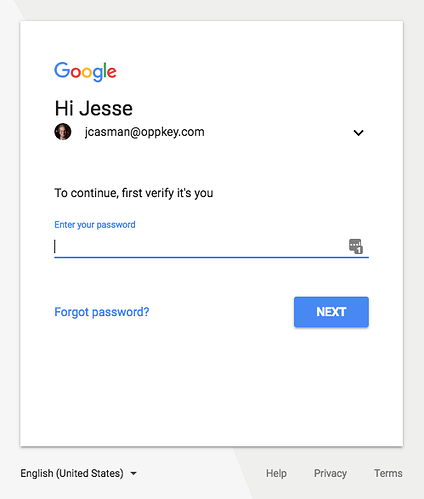 At first I had some trouble with the site settings:

But I talked to the site administrator (me) and got it fixed. Got started: 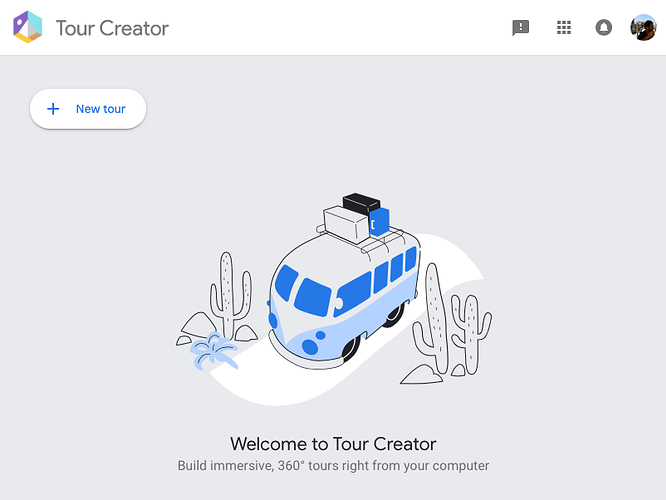 And built a short little tour of a trip up the coast from the Bay Area last year. No extra software needed. Easy to edit titles and attribution. I’d like a way to set orientation. And I’d like some simple editing tools. But both of those can be done before the uploads.

Then you post on a Google site called Poly. Take a look! 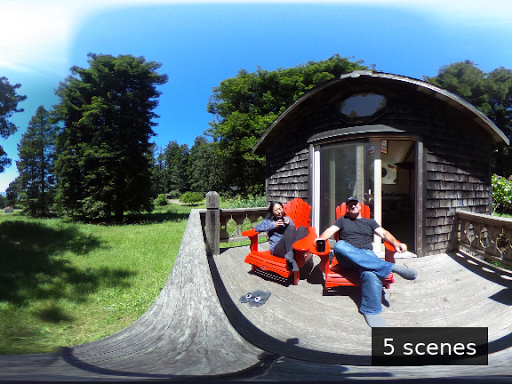 A Weekend at St Orres

Comment: Google has stated that this is aimed for teachers and students. I think it is strong on getting up and going quickly, which would be great in an education setting. It’s weaker on features that would make it feel like a more personalized or professional site.

It does have a nice polished feel, with titling, easy navigation, recommendations for other Tours, and more. While editing, I liked that I was able to first create it as Unlisted and then switch to Public when I felt like it was closer to the final version. It’s also easy to move the order of the Scenes, delete, change them later.

Toyo, awesome use of QR code for more engagement.

I created it during a Yoga workshop. Now, the teachers can connect through social media or e-commerce. It allows for pose instruction, teacher bio’s and product placement. The student’s feedback was for the addition of Video as a gaze control in-menu option, like the current 2D photo option. This would allow for an additional view+explanation of the pose.

This 2-scene product was kind of an un-tour, but could be a stand alone product and new revenue source for digital creators. How have you used this VR skin to make something awesome?

I think this is very useful for activities like Yoga, physical therapy, exercises where the person viewing needs to get into exact poses.

Nice use of 360 imagery with an activity like yoga. Really like the POV between the two handstand examples and being able to look around. I see the potential, too, for adding extra information and images on poses or products.

Google Street Views Summit is going on this week, and there’s more information coming out about Street View ready tools. RICOH THETA - V, S and SC - is mentioned prominently on the Google list of manufacturers/developers that are enabling publication of Street View imagery and is still the only supported 360 video camera for Google Street Views. 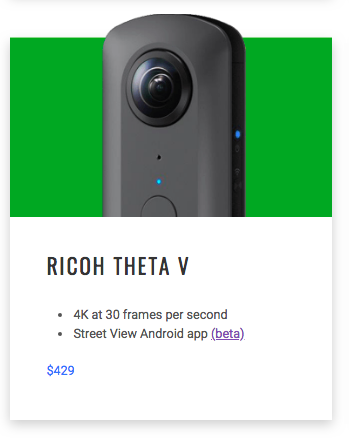 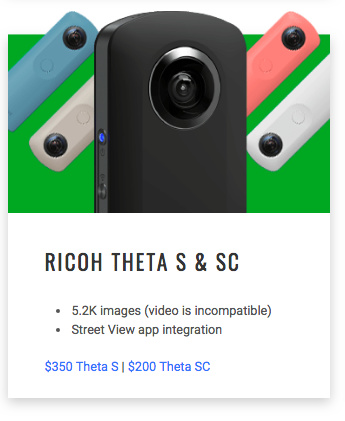 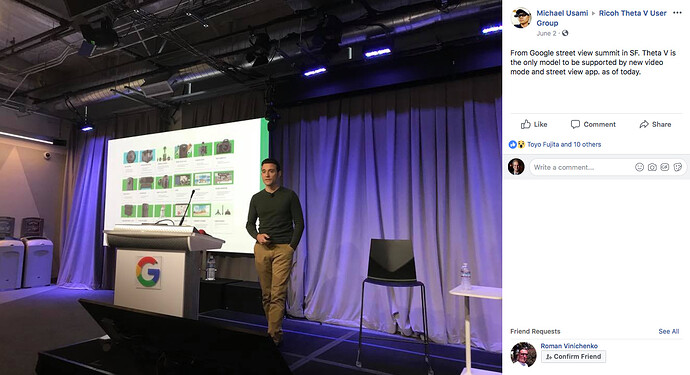 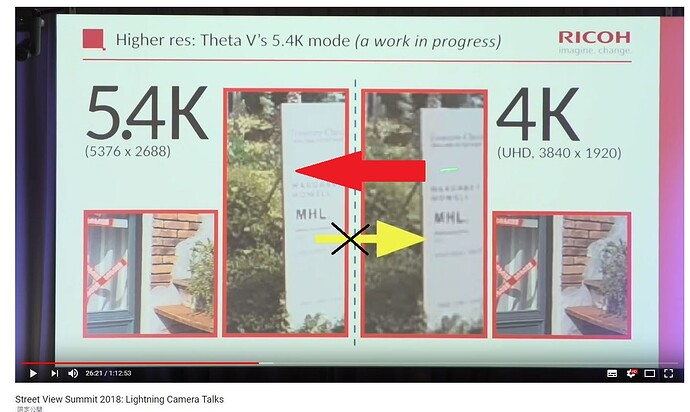 And our project was introduced in SV Summit.

Thanks for sharing this. Your project looks fantastic. Do you live near Hiroshima? Your other subway project was from Tokyo, right?

Thank you for viewing our project. I live in Osaka, not near Hiroshima island.

I added Youtube link of Street View Summit(Camera Talk) on the previous reply.

@Juantonto, thanks for pointing that out. I had missed it in your earlier post. I’m going to put the Ricoh section of that video up as a separate topic. Good stuff.

BTW, I’m quite interested in your project and the Local Guides Connect platform. It would be great to get more information on this.

based on your post, I just signed up for the Local Guides and posted a few pictures for a local working space in Palo Alto.

This is the exact space we had the last THETA VR Lounge at.

based on your post, I just signed up for the Local Guides and posted a few pictures for a local working space in Palo Alto.

Wow very nice! This is my profile on Connect. You can see a lot of discussions and articles regarding Video Mode publishing with THETA V.

I sometimes share some valuable informations of theta360.guide with my mates on Connect, the SVtp and Japanese board.

Other boards are also interesting and full of amazing experiences. Enjoy one of my posts as below.