App for computer supporting the RICOH THETA V will be released today.
RICOH THETA Movie Converter
－Spatial audio of videos recorded on the RICOH THETA V can be converted to the YouTube spatial audio format.
－Instructions
1. Drag and drop the video file you want to convert onto the app icon.
2. The converted video file (*.mov) is saved in the same folder as the original video file.
Perform a fresh install from the download page.
https://theta360.com/en/support/download/

How to install RICOH THETA Movie Converter for Windows

To install the converter, launch the Setup.exe supplied with the product and follow the
dialog boxes for installation.

How to use RICOH THETA Movie Converter for Windows

This procedure applies when the firmware ver.1.00.2 and the main app for computer
“RICOH THETA” ver.3.1.0 are used.

The procedure may change when the software is updated in the future.

When using RICOH THETA V for shooting, place it on a tripod, etc. and stand it vertically.

You need to convert the file into equirectangular format. The file must have ER in it. Verify that the spatial audio works on the Ricoh desktop app 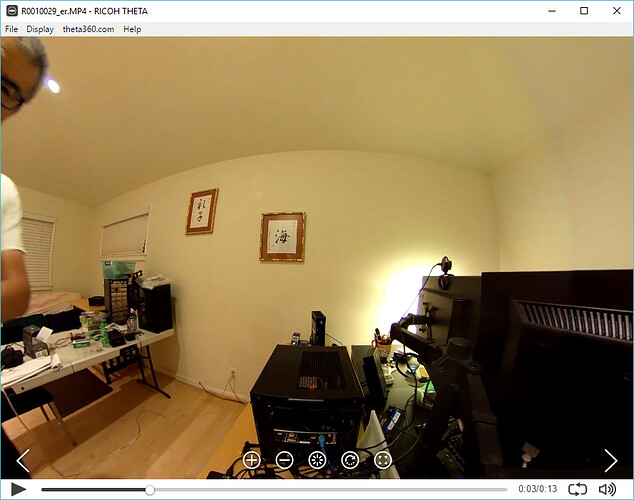 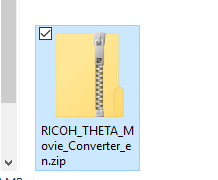 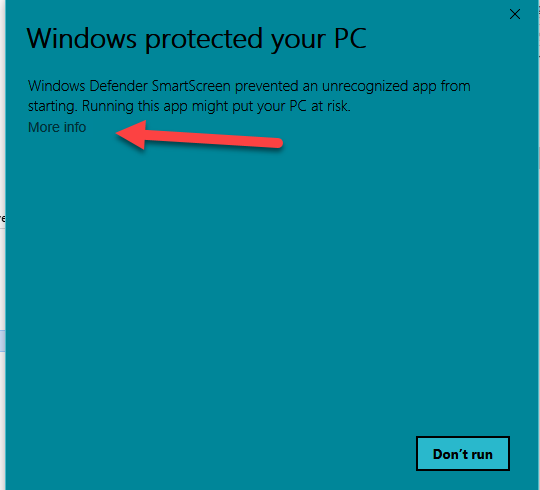 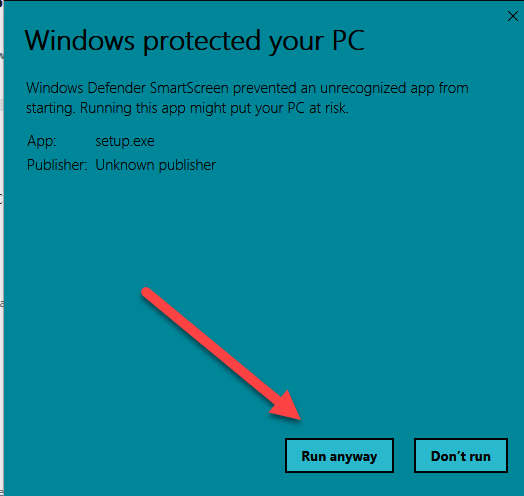 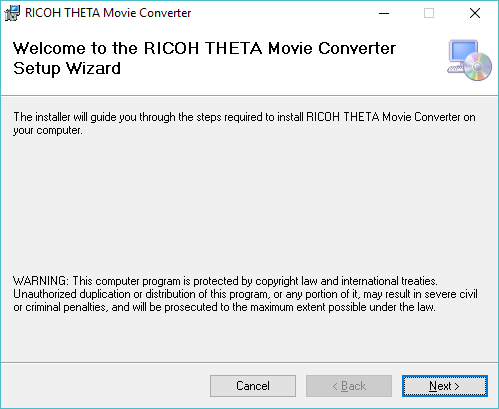 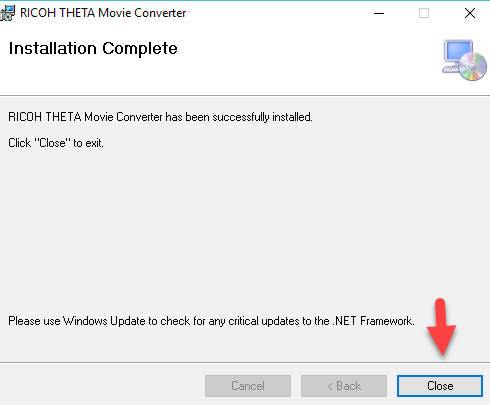 Make sure you drag the file with ER in the filename.

Make sure you upload the file ending in .mov 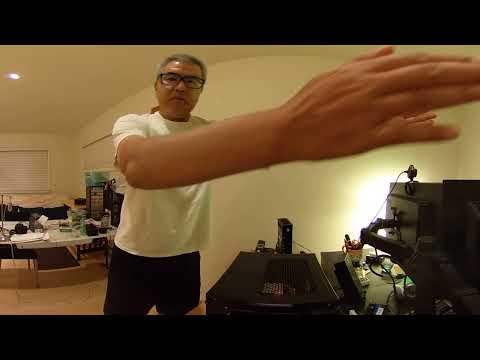 Contribute Your Spatial Audio Test Below

If you have a YouTube video with spatial audio that you created with the THETA V, please share it with the community. Simply reply to this post and put the link into the reply. We can all enjoy your interesting use of spatial audio.

This note from community member @ZZChu

The beautiful side effect is that Final Cut Pro X sees all 4 audio channels once the clip is converted Whooo-hoooo!!! (The export process from Final Cut Pro X is a bit tricky though… one has to export the tracks separately, video and separate audio channels, Convert the audio to multichannel AIFF. Mux the video track and the multichannel AIFF into a new movie, and then run the Spatial Media Metadata injector. FCPX doesn’t currently do a one button share of 360 video.)

And one more. The mics on the built in camera isn’t ideal in windy conditions. (One reason to get the external microphone they are selling for it.) I might try fashioning something like the furry miccovers. (double sided tape and furry material).

Thanks @ZZChu, these tests videos are useful.

That is really interesting. Would you have an example of a “fixed” video for me to check out? I’m embarrassed to say I don’t have a good reference on how it should actually sound.

Yes.
I made the test using a Genelec studio monitor placed in front of the
camera, equipped with the external microphone TA1, playing pnk noise
filtered in the 1kHz octave band.
then I rotated manually the camera, so that the spurce goes also on left,
back, right and back to front (you see the rotations in the the video). And
finally I lower the camera, so that the source becomes Front-Up at 30
degrees elevation.
I uploaded on my web server both the original .MOV coming out of your Movie
Converter app, and the version where I edited the channel order and reduced
by 3 dB the gain of channel W.

Here you see a photo of the setup: 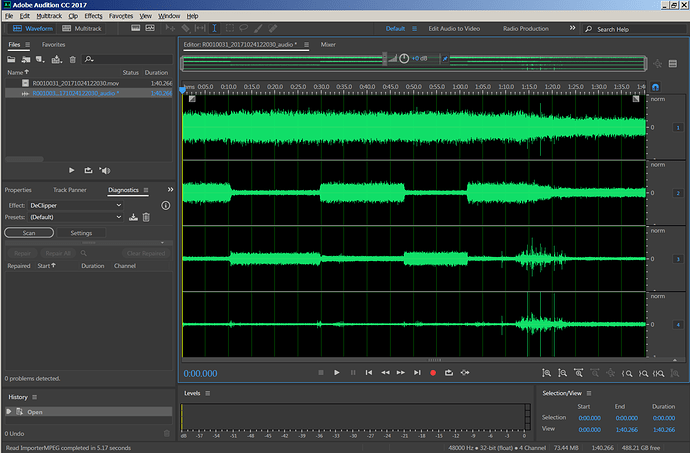 Here you see the sound track (imported in Adobe Audition CC). Please look
at the initial part of the recording, when the sound source was in front,
along axis x; it is expected that the amplitude of W is almost equal to X,
and the other two channels should be much weaker.
This is the original .MOV coming out: 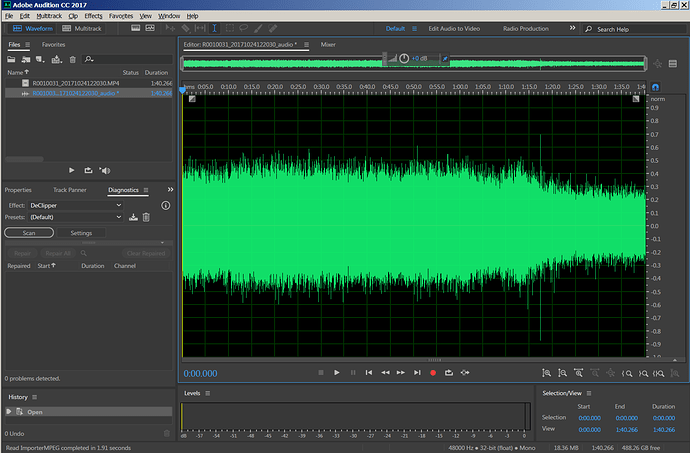 As you see, initially the loudest channel is the second one, which becomes
weak when the source is Left or Right. Hence chennel 2 is X. Channel 3 is
the opposite, hence it is Y. And channel 4 is weak for most of the
recording, except at the end, with the source Front-Up, when it becomes
louder, almost equating X. Hence channel 4 is Z. So the order is WXYZ,
which is wrong!
Furthermore, the amplitude of W is always too large.

Here the soundtrack after channel reordering and reducing the gain of W by
3 dB: 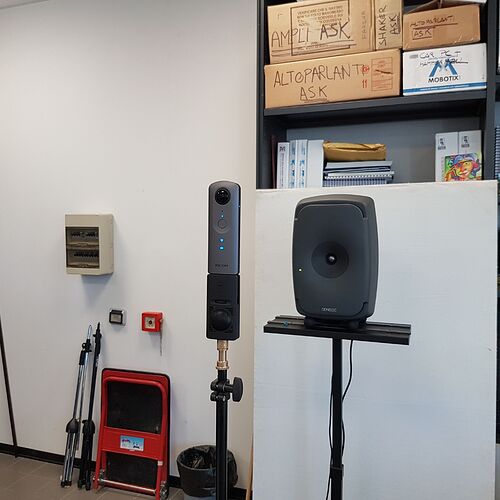 Now the channel order is the correct one (WYZX), and the amplitude of W is
matched with X. Indeed, the amplitudes of Y and Z are still a bit too low
for me (when the source is far Left of far Right, the amplitude of Y should
match W).
I will do better measurements the next week, exploring several frequency
bands, and not just the 1 kHz octave band as in this test.

You should look and listen to the recordings using a smartphone equipped
with a good “cardboard” VR visor, we are using a Samsung S7 with a BoboVR
Z4 visor, and the Jump Inspector program.
Or you can upload the recordings to Youtube, if you prefer (I applied
proper metadata injection also to the fixed video).

Finally, you can visualize graphically the direction-of-arrival of sound
using the free plugin called “O3A Flare”, being part of the O3A Core suite
by Richard Furse (Blue RIpple Sound):
http://www.blueripplesound.com/products/o3a-core-vst
Here what is shown when the initial part of the original .MOV file coming
out from Movie Converter is analysed: 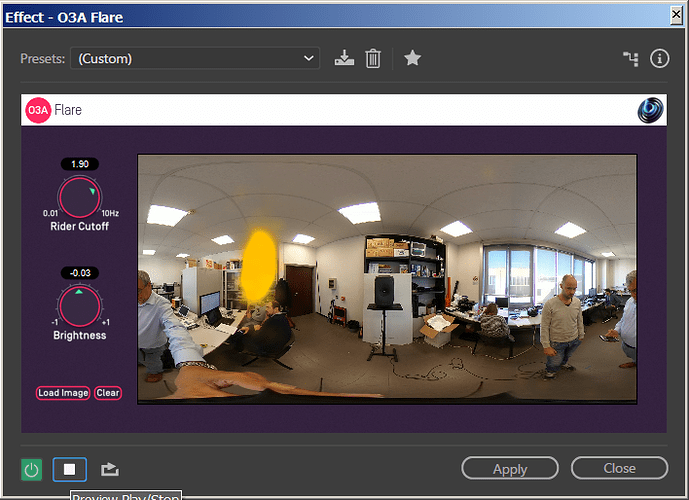 As you see, the sound does not appear to come from the loudspeaker, it
appears on far left instead!

And here instead what happens analysing the fixed version of the video file: 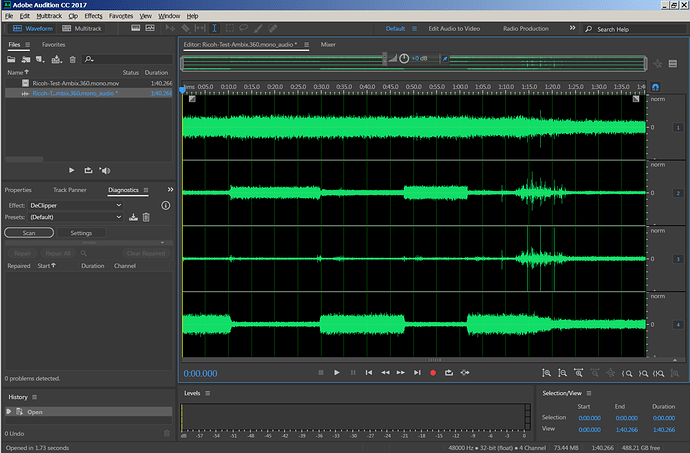 Now the sound is perfectly centered with the real position of the sound
source…
I hope you can fix easily the Movie Converter app. It should be easy…
Indeed, I would also be able to extract my self the original 4-channels
soundtrack from the MP4 file recorded by the camera.
In reality I was expecting that the MP4 file did already contain the
4-channels soundtrack, instead when opening it with Audition I see only a
mono track (which is substantially identical to W): 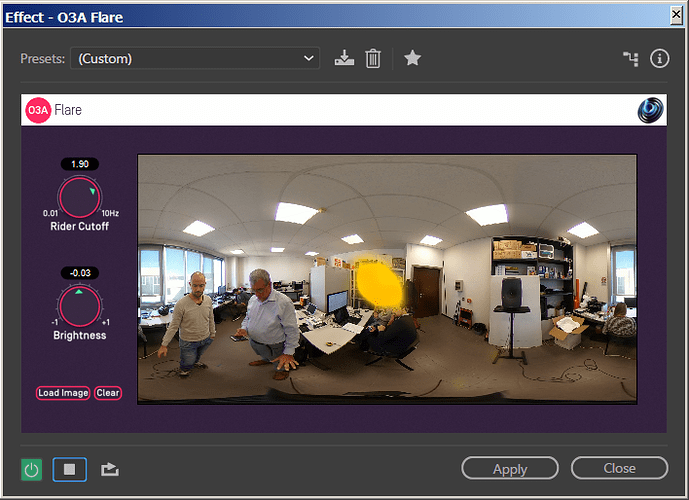 Having to reprocess the MP4 for converting to MOV using the Movie Converter
app is not practical.
I wpould have access directly to the 4 channels on the MP4 file, instead of
having to use a converter app.

One buys the Ricoh Theta V mainly for its 4-channels microphone system, if
it was just for the 4k Video there are better alternatives at smaller
price. So one expects to have immediately access to the 4 channels
soundtrack…
So I hope that in a subsequent camera firmware update you can jut save
directly an MP4 or MOV file with a single soundtrack containing plain
4-channels Ambix signals.
Of course, also a much larger camera memory would be appreciated, as 19
Gbytes are really poor. I attempted to record Verdi’s Messa da Requiem past
week (the same day I received my Ricoh Theta V), but the recording stopped
approximately after 40 minutes due to filling the camera internal memory,
so I did loose half of the concert! At least 64 Gbytes of memory would make
this camera much better value for the money, although I would go directly
to 128 Gbytes if there was the possibility to replace the internal SD-card,
as in our previous Ricoh Theta-S unit…

If you want to download and test my video recording yourself, here is the
link:
http://www.angelofarina.it/Public/Jump-Videos/Ricoh-Theta-V-Test/
Bye

Your fixed clip appears at 1:40

I hope the Ricoh Theta people can take a look.

I did open already a ticket, I also hope they fix this nightmare as soon as
possible…

I just applied your fix to a clip—(removed my previous wrong steps) and adjusted the first channel -3db and it seems to work. Thank you for the heads up on this!

I can’t trust my ears though on what is “right” here. 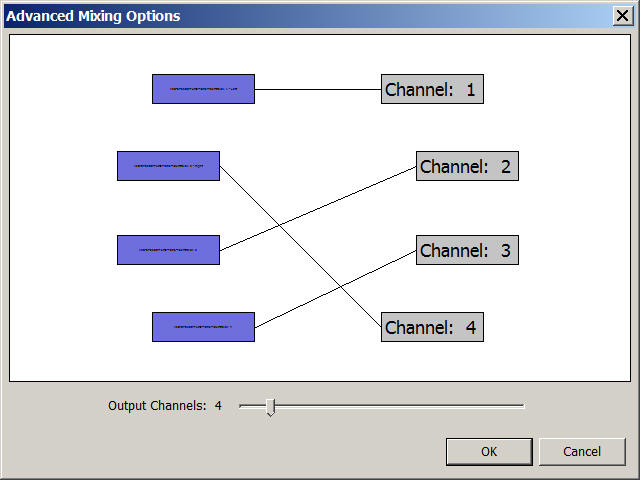 Thank you! I was wondering why it sounded so flat and lifeless. I updated the clip with your instructions and it is working! 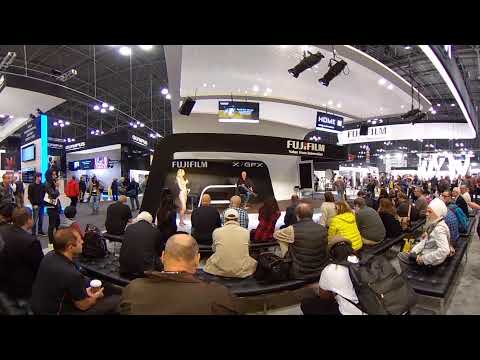 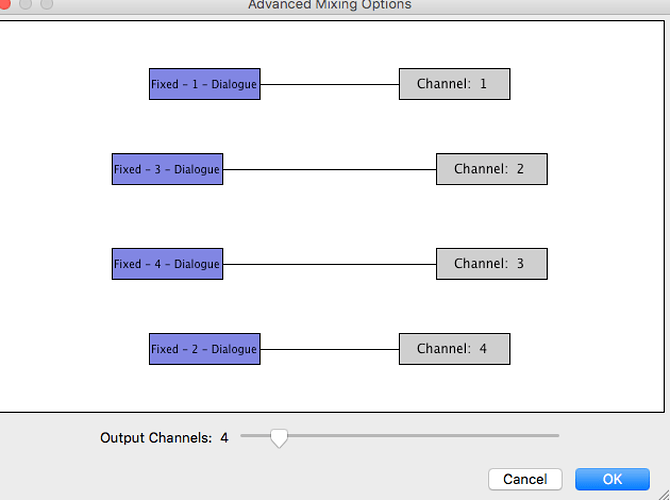 I made a quick video showing the steps in using both Audacity and iFFmpeg (or Windows http://www.myffmpeg.com) to correct the issue using Professor Farina’s instructions.
(wrong video removed)

Very nice, but there is still one error. Initialy the gain reduction of 3dB
applied to channel W is not operational, as you did simply go down with the
playback gain of channel 1, which does not affect the amplitude of the data
saved into the file.
You need to apply the Amplify effect, by first selecting the whole content
of channel 1, and then go to Effect-Amplify, as shown here: 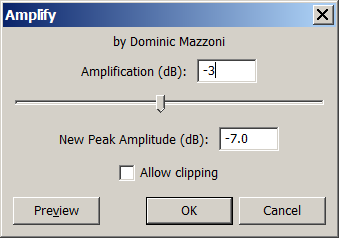 After pressing OK, you will see visually that the amplitude of channel W is
reduced, becoming comparable with that of the other 3 channels. The rest of
your giude is perfect, although I favour using FFMPEG from the terminal
window instead of using the crappy iFFMPEG. But that is juts matter of
preferences, of course, as the two programs do exactly the same job…
Thanks.
Bye

Thanks for all the help. I have updated that video.

I think @jcasman is sending this information to some people he knows at Ricoh.

I did open already a ticket, I also hope they fix this nightmare as soon as

Did you open a ticket using the main customer support system?

Today I made further experiments outdoors in a very silent place with my
Ricoh Theta V, using both internal and external microphones. I have just
updated the firmware to v. 1.10.1.
In each recording, I was talking subsequently in Front, Left, Back and
Right positions, as shown in this picture: 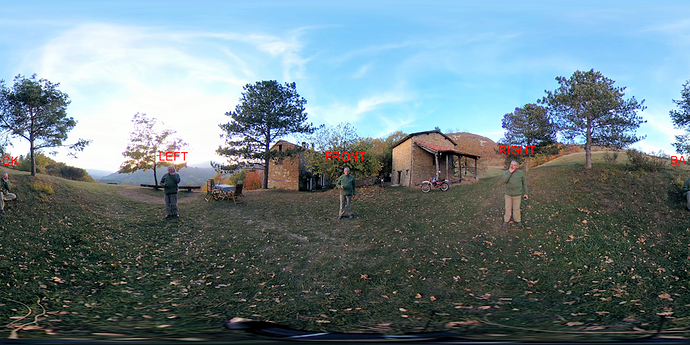 Here the results, first with the internal microphone: 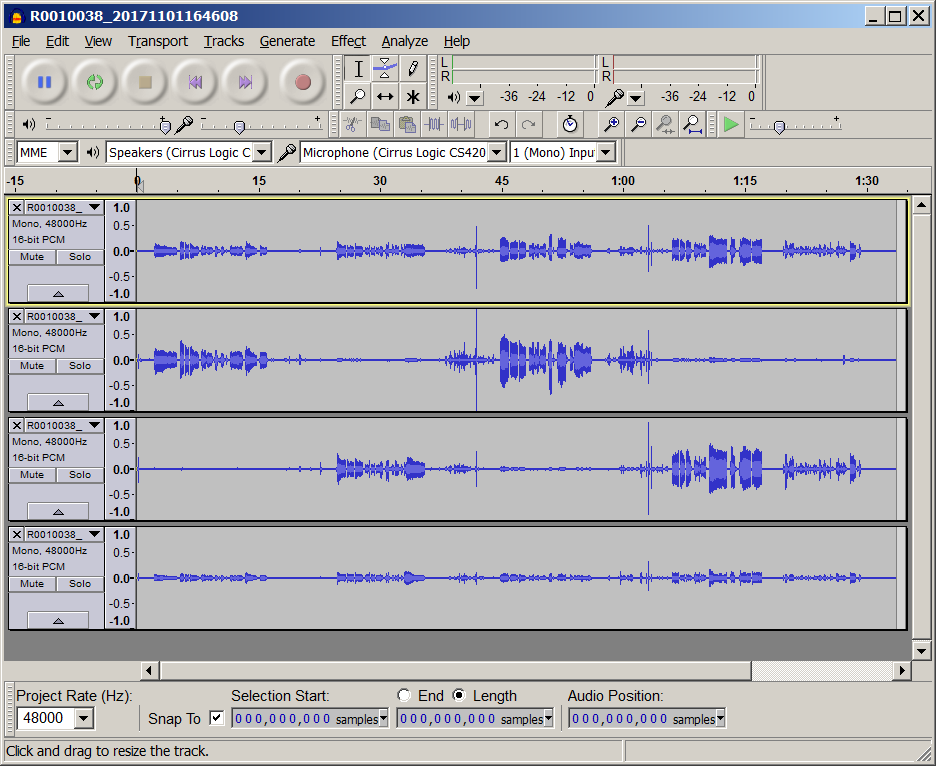 And here with the external TA1 microphone: 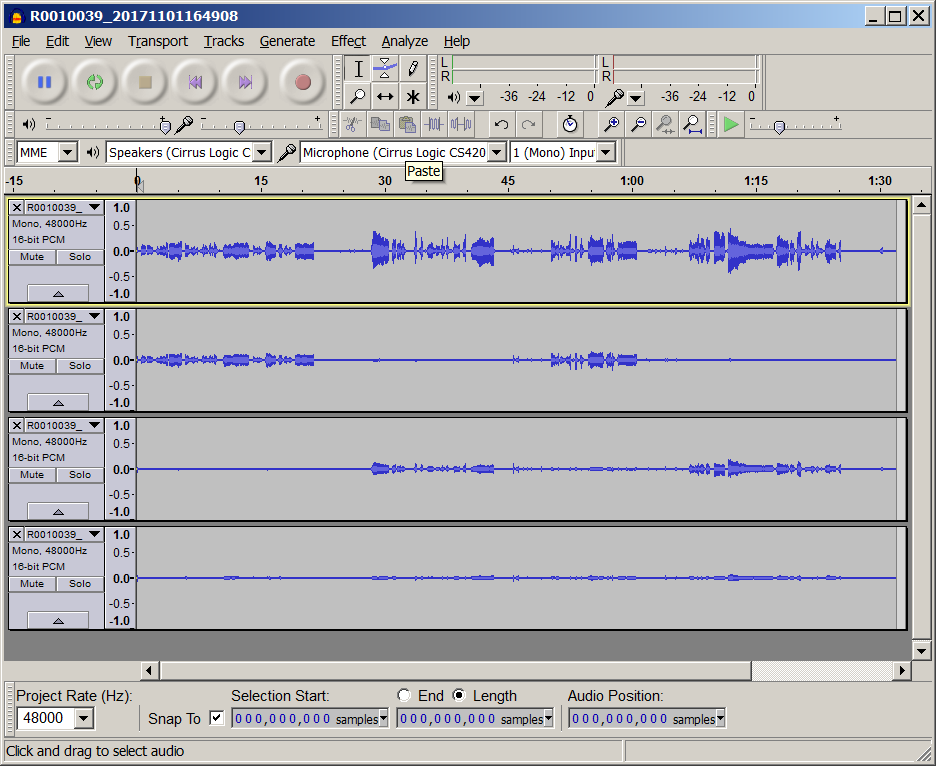 It can be seen (and it has been confirmed by measurements) that using the
internal microphones channel W (the first one) is much smaller than X
(approximately by 6 dB, when looking at the portion of the recording in
which I was in front and Back positions).
instead, when using the external microphone TA2, the opposite happens: now
the 1st channel (W) is louder than the second channel (X), by approximately
3dB.
This means that the recipe for fixing these wrong Ambix recordings already
suggested above and outlined in the video posted by John Chu is correct for
recordings done with the external TA1 microphone.
Instead, for recordings made with the internal MEMS microphones of the
Ricoh Tehta V, it appears that it is wrong to attenuate channel W by 3 dB,
it would instead be necessary to boost it by 6 dB!
So we have two recipes: 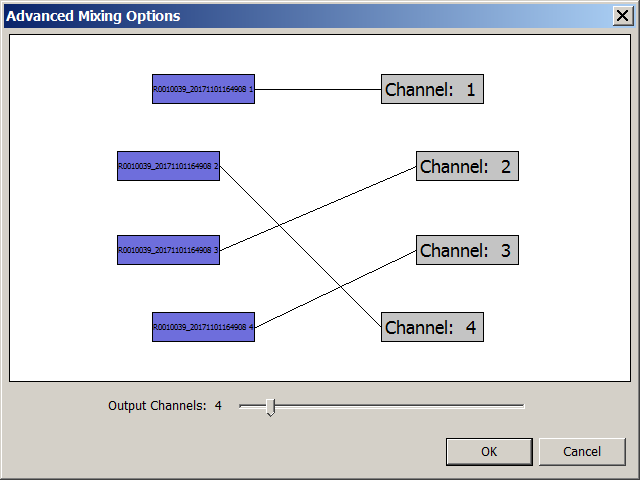 Thank you for sharing these tests. I reviewed the information with a manager at Ricoh that is influential with the THETA. He had already watched the video you made and had already sent the information to the engineering team in Japan. He understands about FuMa and Ambix. The right people are reviewing the great information you provided, including the link to this thread.

Great, thanks! I hope they can fix the code inside the Movie Converter
program as soon as possible, taking into account the different behaviour of
the internal and external microphones. The point is that the recorded MP4
file does not seem to provide in any way the info about having recorded
with the internal or external microphones. And, as proven by my tests of
yesterday, the camera behaves quite differently in the two cases…
So perhaps the problem cannot be solved just with a modification of the
Movie Converter app, also a firmware update inside the camera will be
required.
This could be the possibility to record an MP4 or MOV file with the
4-channels soundtrack already available, and with proper metadata injection
for Youtube, without the need of the additional passage through the Movie
Converter app, which looks to me as a temporary solution.
If someone wants to repeat my tests, here you can download the 4 MOV videos
(original and fixed, internal and external microphones):
http://www.angelofarina.it/Public/Jump-Videos/Ricoh-Theta-V-New-Test/