This is not a recommended hack as it will void your warranty. I am including the information here since the original post does not have comment thread anymore.

Ricoh Theta S camera is a camera able to capture 360-degree panoramas in one click.

Very well made and pretty good quality for the price, one of its main advantage is to be able to capture a 360 degree panorama every 8 seconds and then turn them into timlelapse.

But Ricoh has chosen to use a 8Gb internal storage, which represents about 1600 views …

1600 panoramas represents 3:30 hours of shooting and hardly a minute of film at 30 frames per second.

It’s frustrating not being able to capture a place during one day long, you can increase the duration of use with external batteries (the camera can be recharged during operation), but the 8Gb internal memory will be full very quickly.

Roberto Leone who paved the way by opening the famous Theta S realized that as his little sister (the M15) it used a micro SD card (8Gb Transcend) as internal storage, which could be replaced with a larger capacity.

If Ricoh had opted for an access door to this card would have made life easier, but here is a step by step tutorial how to replace the micro SD card from your Ricoh Theta S with a larger capacity, at your own risk (open your camera manufacturer will void its warranty …)

STEP 1 - Remove the cover (Definitely not authorized by RICOH) 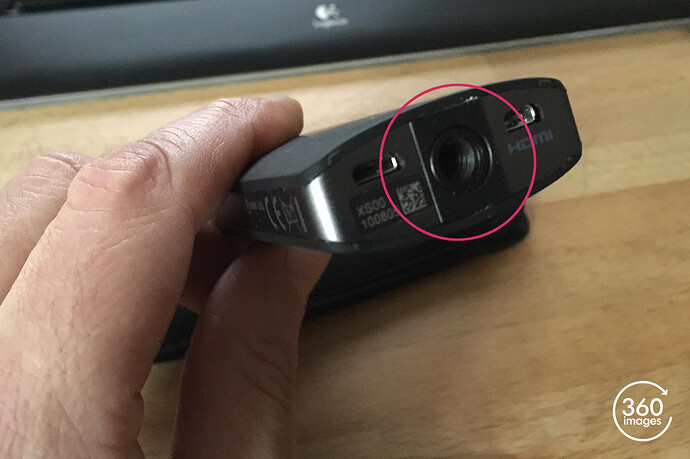 Once removed you will find four small Phillips screws. 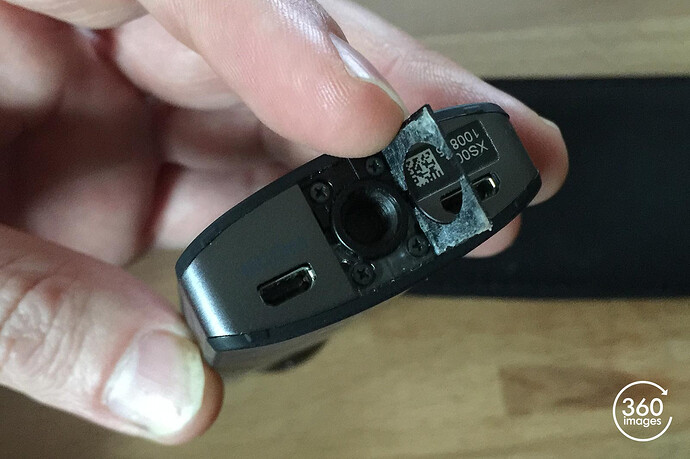 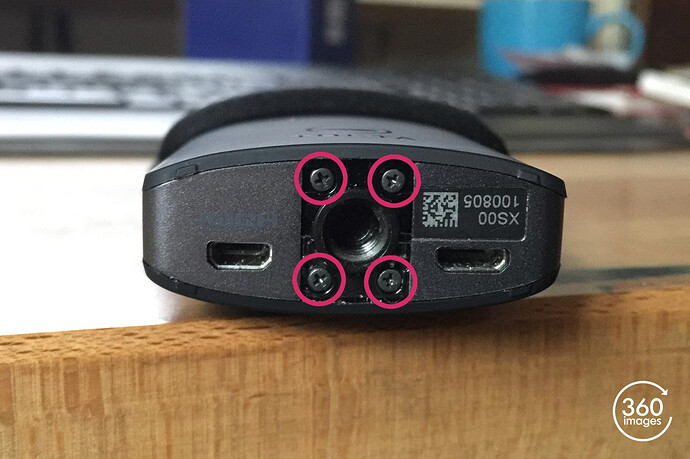 STEP 3 - Open the Theta S and VOID YOUR WARRANTY

Pull the opposite part of the case to the usb and HDMI jacks. You can help yourself with plastic utensil to pry . Don’t be afraid to pull , the case is fermemant clipped . 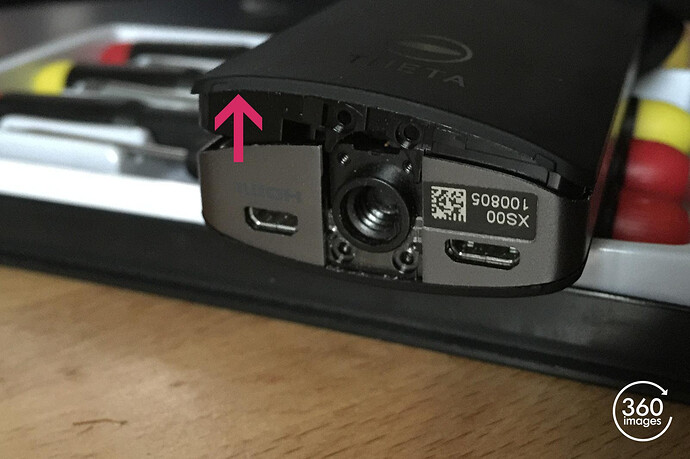 STEP 4 - Remove the trim - (You may break your camera) 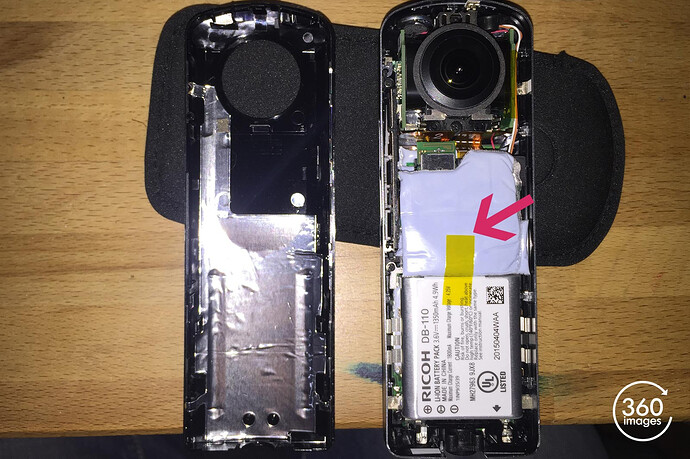 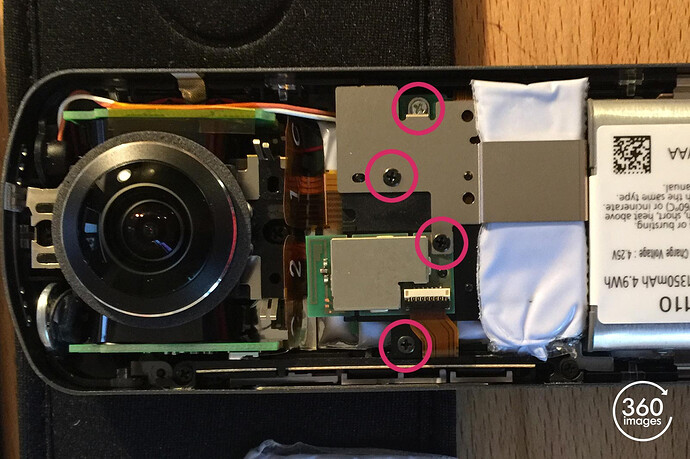 STEP 6 - Remove the pcb board

Be careful not to bend the ribbon cable. 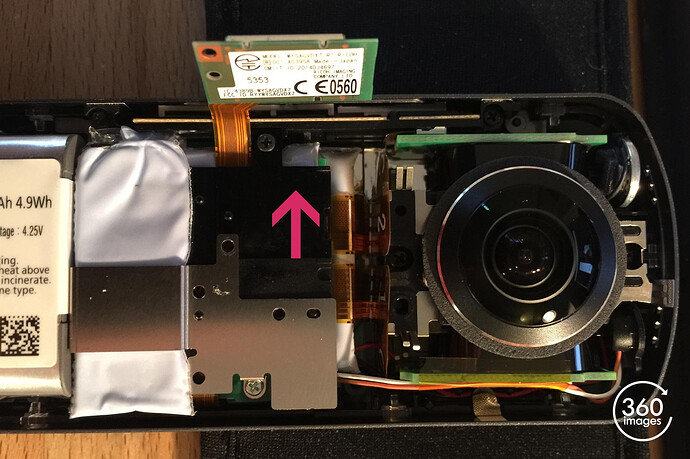 The battery is tapped, so don’t be afraid to pull it hard. But don’t bend the connexions 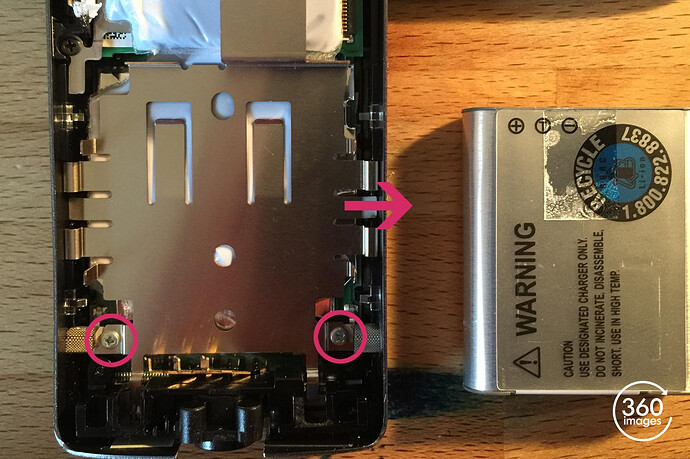 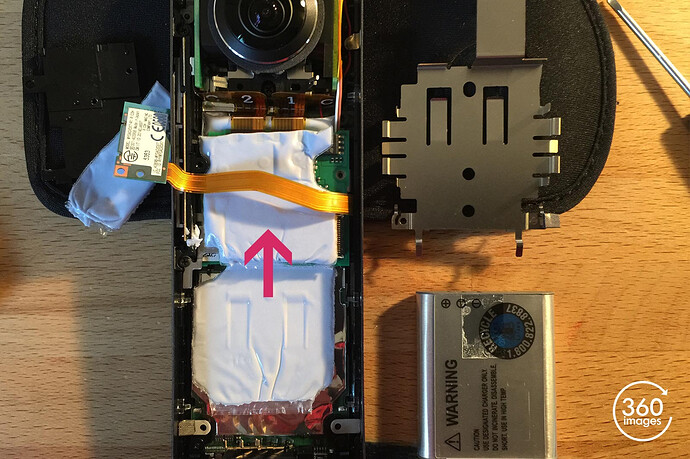 The micro SD card is under 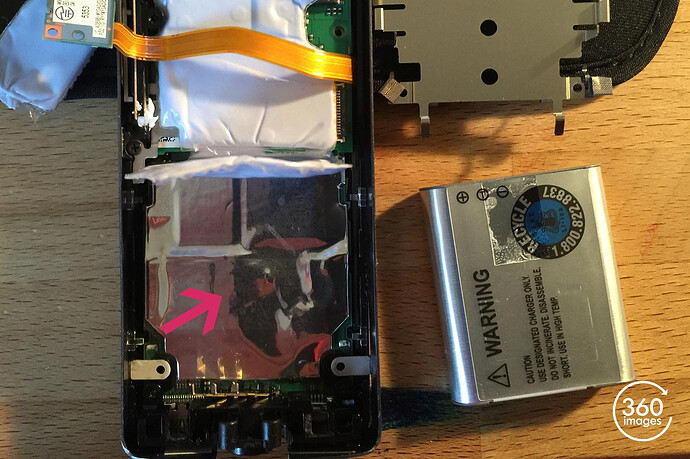 You have to push on the SD card to disengage from its location, don’t pull on it ! 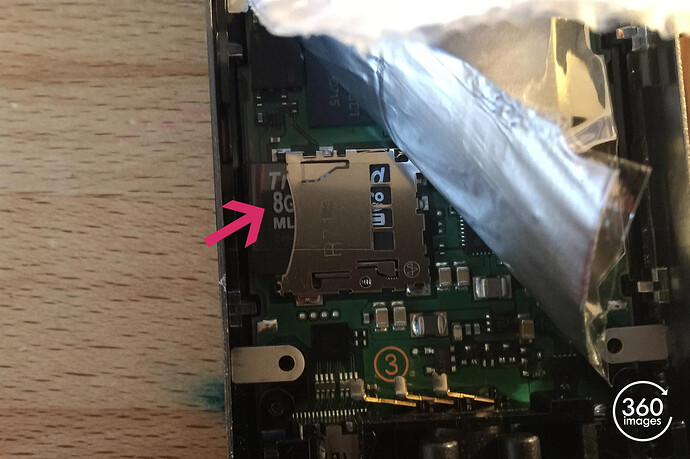 Remove the two screws holding the left edge of the camera to get out the SD card. 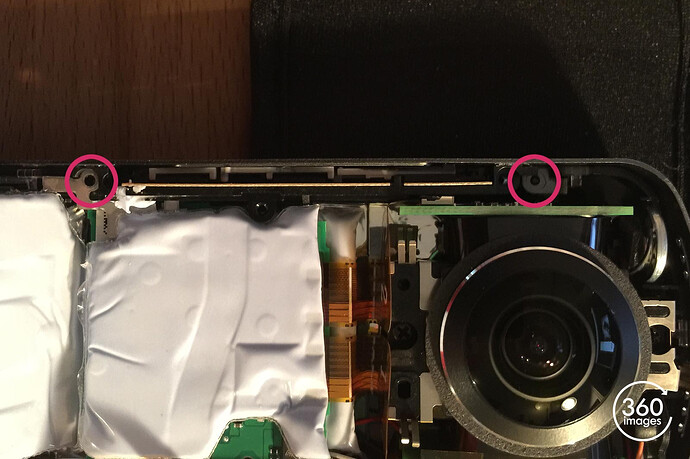 Pull down the camera cover to be able to remove the 8Gb SD card. 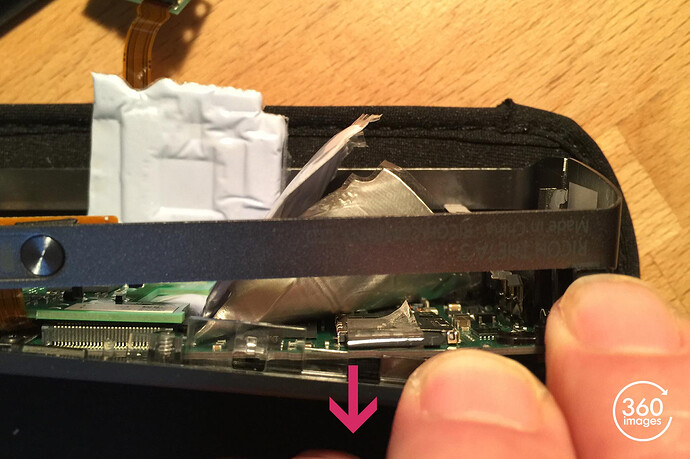 Pull down the camera cover to be able to remove the 8Gb SD card.

Replace the micro SD card with a bigger one (haven’t tried more than 32Gb) and format it FAT32. 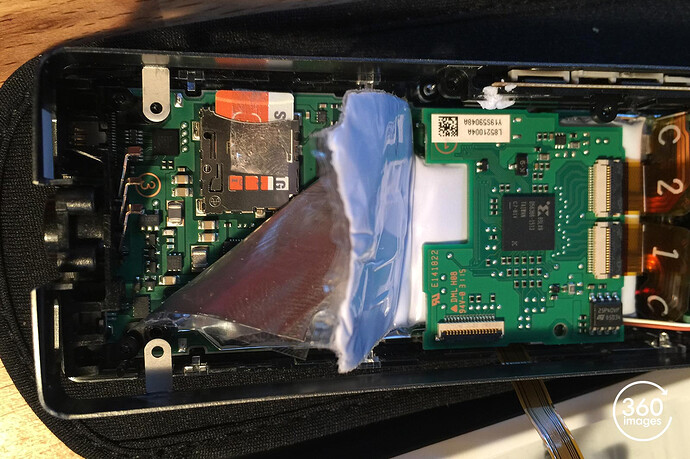 Follow the steps in reverse order and don’t forget to reposition this small part. 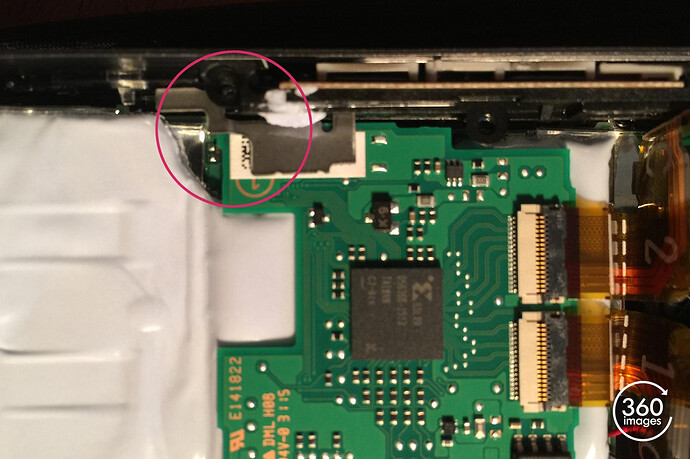 Turn your Ricoh Theta S to check that everything works well. 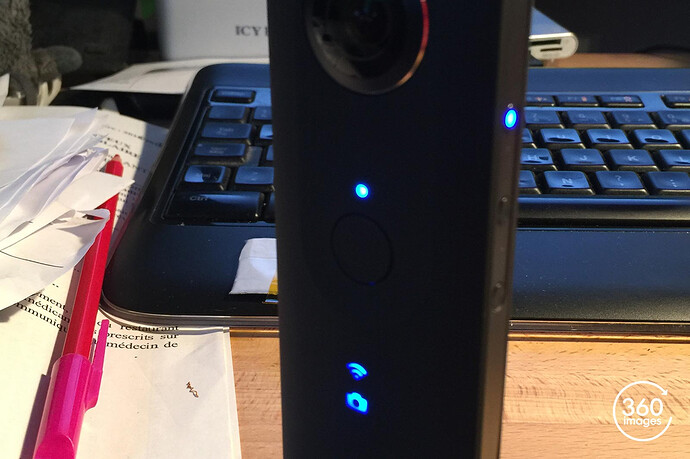 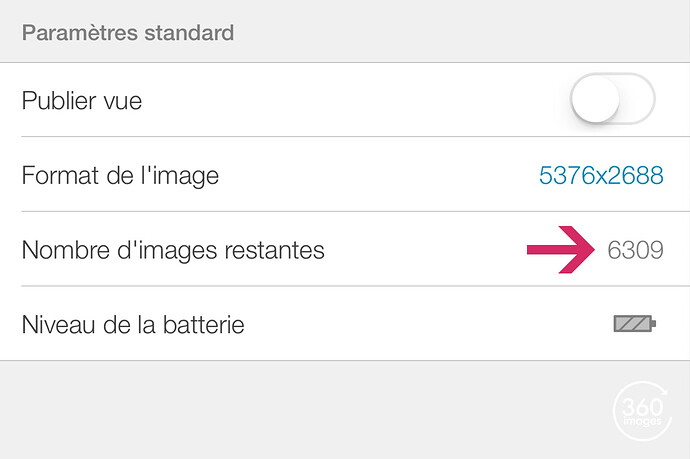 From mbirth
By the way, the used MicroSD card is an industry-grade MLC card which is more stable than the cards you can buy in stores.

From me in a different discussion

Actually, the guy Boby Brown that had the problem got it to work with a Samsung evo 32gb orange card, class 10. He basically copied the exact same setup as the first guy, Jerome Baccon-Gibod. Amazing that they’re willing to void their warranties this way. Not sure why they don’t just use the API to delete the images on the camera and download it to an external disk

Thanks. So this is a bit of a problem with larger videos over 4GB, right? Does the MicroSD card need to be FAT32, or do you think it can be exFAT?

It is no idea to use a 64GB SD card when you have to make 2 Partitions on it
here below are a image from Image Capture on a mac the video are 25min 1,4GB 1280x720
i docent think a1920x1080 become over the 4GB limit
we shot a video simultaneous with a AS200V Action Cam XAVC format SD card
1920x1080 50 frames p.sek 25min Video file size 10GB
exFAT (Extended File Allocation Table) is a MS format i docent think the Camera will recognize the card then.
A THETA 4K version runs into trouble extending the 4GB limit 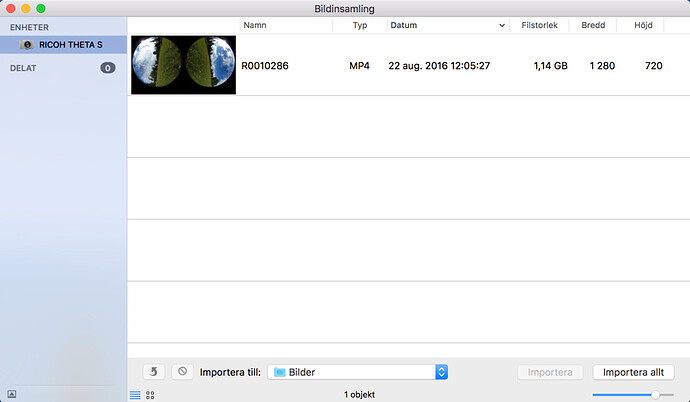 Great guide! My only request is that it would be helpful if the Theta was always oriented in the same direction (lens on the left because that is how it’s easiest to remove the SD card ?), if possible, in all the pics so that people won’t get “turned around” when assembling/re-assembling.

There was a point during re-assembly that I had laid out my screws in the position that i removed them (the 4 screws (1 silver, 3 black), but because certain pictures had been rotated, I almost put them in the wrong way during re-assembly.

Also, I believe Step 15 has an incorrect picture - I think the metal “washer” goes over the black piece and not under it. If you see Step 9, it appears the silver metal piece goes between the screw and the black plastic “hole”

Thanks for your contribution to the knowledge pool.

Also, would be nice to see a picture of the 4 screws (1 silver, 3 black) of Step 5 and how they align with the holes. Per my last comment, my placement may have been incorrect. I’ll try to add in a picture of the 4 screws (1 silver, 3 black) and how I think they’re aligned in my next upgrade, but if someone is doing an SD upgrade in the future, if they could take a pic of which screws go where, that could be useful to future users.

but it seems to be possible to format greater volumes with this GUI
http://www.ridgecrop.demon.co.uk/index.htm?guiformat.htm

I wish i could Dremel a slot. I know where it is and I have a Dremel, but for some reason, I’m more comfortable opening and unscrewing screws than with slicing open a slot. Maybe one day, I’ll get the guts to do it; possibly if I had a walkthrough guide that i know works =)

Also, I did originally use Fat32Formatter for the initial 64GB I tried with no luck. To be fair, I used Fat32Formatter (Quick Format) on a Samsung Orange 32GB (known to work) card and that also did not work. I THEN tried windows format (right click, Format), and also used Quick Format with the 32GB Samsung Orange card and that also did not work. Hopefully if I find a combination that works, I’ll post it here for the community. My next attempt will be to uncheck “quick format” and try that.

A member of the THETA Developers Beta forum “dhanainme” Finally,I formatted the card in an other Camera (a Sony A6000) and inserted the card to Theta. this alone worked.for him
https://developers.theta360.com/en/forums/viewtopic.php?f=5&t=1898#p4349

That’s a nice find. There’s a lot of good information there, including this bit:

The key bit of information being this line:

The other really interesting thing is that the person used a different camera to format the microSD card.

I just completed a battery replacement and inserted a 128 gb micro and crossed my fingers. It works fine!

Amazing! @Rick_Borman, can you list your parts? For example, the exact battery and microsd card would be great if you have the information handy.

Also, if you have any pictures of your build, that would be wonderful.

This is a great example of community members helping out each other to extend the life of equipment. There’s really no other way of changing the battery except these high-risk, high-reward, DIY projects.

Great news that your project was successful.

Thanks for reaching out. You are 100% correct that it is high-risk hight reward. The unit is persnickety, delicate and the screws are unnaturally small.

The memory was a last minute cross-fingers try. I used a PNY 128gb micro Elite XC 1 .

I will also add this info to the thread.

I must admit that the unit does not look as tight as it did before disassembly. That said, it is certainly functional and for my purposes as better instrument.

Super cool! I’d really love to see pictures, too, from the hack, if you have any.